On the back of Intel's 11th generation Rocket Lake processor release last month, MSI has dropped a new Z590 motherboard which certainly raises an eyebrow towards aesthetics. The new Z590 Ace Gold Edition is a gold-inspired take of the regular MEG Z590 Ace motherboard, with all of the same premium features such as PCIe 4.0 support, 2.5 GbE, Wi-Fi 6E, and dual Thunderbolt 4 Type-C on the rear panel.

Built around its Enthusiast Gaming series, the MEG Z590 Ace Gold Edition injects a lot of flair and vibrance that the regular MEG Z590 Ace doesn't have. While aesthetics comes down to a matter of individual opinion, the MSI MEG Z590 Gold Ace Gold Edition is decked out in gold and brushed aluminum finishing, including the rear panel cover, power delivery heatsinks, PCIe slot armor, M.2 heatsinks, and the chipset heatsink. 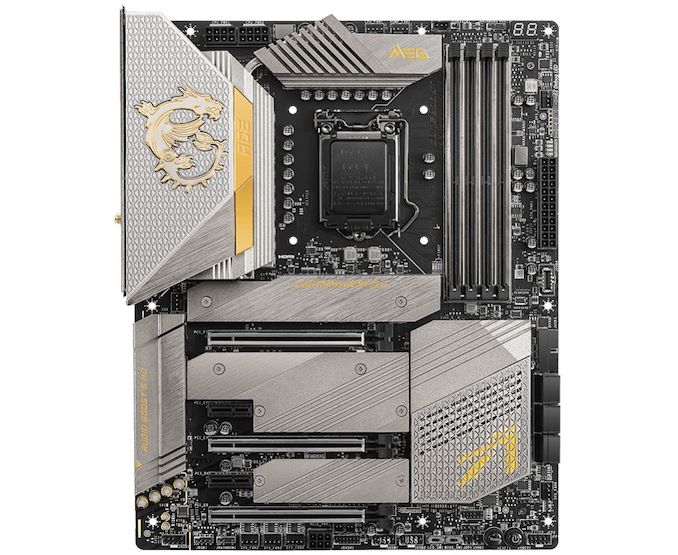 Despite the refreshed and extravagant aesthetic, it includes the exact same feature and controller set as the regular MSI MEG Z590 Ace, which includes two full-length PCIe 4.0 slots that can operate at x16 and x8/x8, a third full-length PCIe 3.0 x4 slot, and two PCIe 3.0 x1 slots. There are four memory slots that can accommodate up to DDR4-5600 memory, with a maximum capacity of 128 GB, and includes one PCIe 4.0 x4 M.2 slot, three PCIe 3.0 x4/SATA M.2 slots, and six SATA ports which is plenty of storage options. Providing power to the CPU is the same 16-phase power delivery with premium 90 A power stages as the regular Z590 Ace and dual 8-pin 12 V ATX CPU power inputs.

At present, we don't know when the MSI MEG Z590 Ace Gold Edition is going to hit retail shelves, nor do we have any pricing. The regular MSI MEG Z590 Ace has an MSRP of $500, so we expect the gold variant to cost a little more.

We also have the MSI MEG Z590 Ace (regular version) in for review, which we will publish in due time.