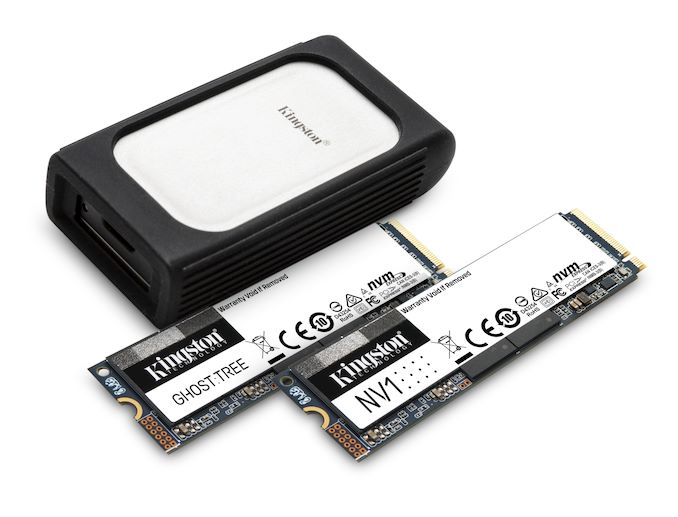 Kingston's new entry-level consumer NVMe drive will be the NV1, possibly ushering in a new naming scheme for their consumer NVMe lineup. The product strategy for the NV1 was likened to their A400 SATA SSD: the NV1 will probably be competing to be one of the cheapest NVMe drives from a recognizable brand. The hardware used in the NV1 will fluctuate based on market conditions. Initially, we should see a mix of DRAMless controllers (Phison E13T, SM2263XT) paired with TLC NAND for lower capacities and QLC NAND for at least the highest 2TB capacity. This means the NV1 will be more low-end than their current A2000, which straddles the line between low-end and mainstream NVMe SSDs by using TLC NAND and a SM2263 controller with DRAM, albeit only four NAND channels. Kingston is planning for the NV1 to be ready to hit the market around the end of Q1 or early in Q2.

At the high end, Kingston is working on a PCIe 4.0 SSD based on the Phison E18 controller. This is currently codenamed "Ghost Tree", and a more conventional product name will be chosen before release. This drive will take over the flagship position from their current KC2500, their second product based on the Silicon Motion SM2262EN controller. The Ghost Tree product will offer capacities up to 4TB. Kingston didn't disclose what NAND will be used, but given the timing we would expect to see Micron's 176L TLC rather than the 96L TLC used by the Phison E18 drives that are already on the market.

In the second half of the year, Kingston will introduce the XS2000 high-end portable SSD. This will support USB 3.2 Gen2x2 to provide speeds of up to about 2GB/s, and capacities will range from 500 GB to 2 TB. Kingston hasn't officially decided which controller the XS2000 will be based on, but they want to use a native USB controller rather than a NVMe controller behind a bridge chip. That means the newly-announced Phison U18 controller should be one of the leading candidates.

Last year, Kingston released the DC1000M, their first U.2 SSD. This year, they're replacing it with the DC1500M, a fairly straightforward update to 96L 3D TLC from Kioxia that should bring some performance and power improvements. The DC1500M will still be using the Silicon Motion SM2270 16-channel enterprise NVMe controller, and this time they've added multiple namespaces support to the firmware. The DC1500M is currently in qualification and will be available around the end of Q1.

Kingston's other enterprise NVMe product line is the DC1000B server boot drive, based on the Phison E12DC controller. Currently, the DC1000B is offered in 240G B and 480 GB capacities, but Kingston will soon be adding a 960 GB model.

Kingston is also starting to plan for a PCIe 4.0 U.2 drive, but this is in very early stages; they haven't decided on a controller yet, so we won't be seeing this launch any time soon. Kingston didn't share any plans for their enterprise SATA products, but they're still selling more of those drives than their enterprise NVMe products. (Kingston's enterprise/datacenter customer base tends to be less aggressive about migrating to newer platforms than the top hyperscalers that have been the primary drivers of NVMe adoption in datacenters.) Kingston's DC450/DC500 family will probably be getting the occasional NAND updates for another few years.

For content creators that juggle a lot of memory cards and USB storage devices, Kingston is introducing a new series of card readers and a 4-bay dock for those readers. The dock uses a USB 3.2 Gen 2 (10Gbps) host interface and acts as a USB hub providing USB 3.2 Gen 1 (5Gbps) connectivity to four modules. One module is bundled with the dock, providing one each of USB-C and USB-A ports. Two other modules are sold separately: a two-port SD reader and a two-port microSD reader, both supporting UHS-II. All three types of modules are capable of operating separately from the Workflow Station using a USB-C cable. 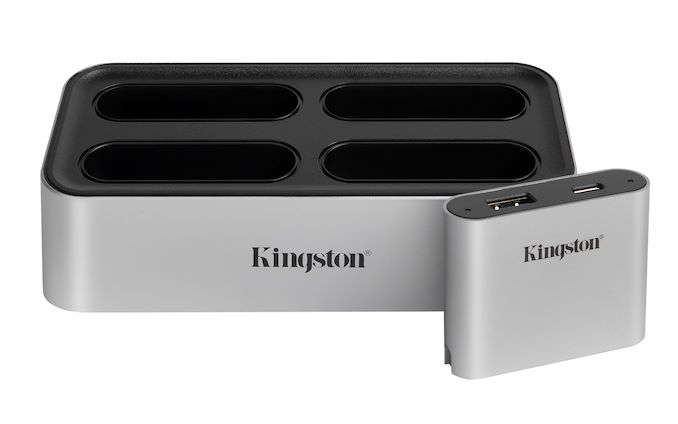 Kingston's Workflow Station is a similar concept to the Workflow HR1 and HR2 hubs formerly offered by Lexar. Kingston's system is more modern (USB-C support) and cheaper, but doesn't support as many different memory card formats. This is mainly because Kingston isn't interested in making a reader module for a format they're not currently selling cards for, ruling out CFast and all the newer PCIe-based standards that are trying to gain a foothold in the market.