At this year’s virtual CES 2021, Ambarella is launching its new flagship vision SoC – the CV5. Dubbed as a 8K AI vision processor, the new SoC addresses Ambarella’s more traditional core market which includes sports cameras, drones, and the increasing important automotive business of the company. If you’ve had a GoPro or a DJI drone in the past decade, the chances are high these devices were powered by an Ambarella SoC – although many of these companies nowadays also rely on in-house silicon. 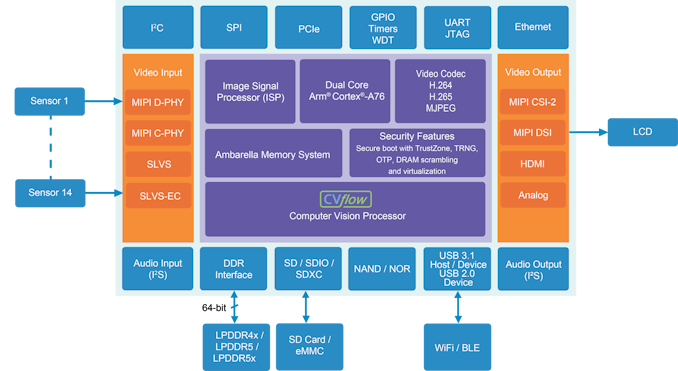 Unlike a mobile phone SoC, a vision SoC such as the CV5 is optimised for one task, and to do that task very well: broad and deep camera operation. Over the years Ambarella has been employing and improving its own proprietary image signal processor which takes as input raw camera sensor data and process it into usable video streams across its wide range of costumer product deployments.

The new CV5 in that regard is extremely capable in terms of raw camera input capabilities: supporting an extreme amount of physical camera sensor interfaces, the new chip can simultaneously enable up to 14 sensors in a device/machine. The reason for the support of such a large number of sensors isn’t directed at consumer devices but more at the automotive market which now routinely deploys a massive number of cameras in new car designs.

The new ISP and video encoders are capable of supporting up to 8K60 streams – with that total processing and encoding power being able to be reconfigured and spread out across a wide number of video streams, resolutions and frame rates.

The CV5 processor, much like its predecessor also support a wide variety of I/O needed to connect the SoC within a complete system with peripherals. What’s new here is the new support for newer generation LPDDR5 memory alongside the existing LPDDR4X support. 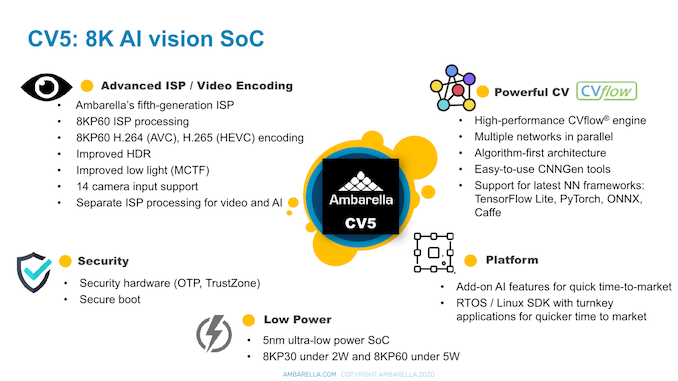 Amongst the new ISP improvements, we’re see new HDR capabilities that vastly improves dynamic range of captures – something that’s also extremely important not only for consumer devices, but also critical for the automotive market. Ambarella says that it works very closely with all the sensor manufacturers and makes sure that its ISP will be able to handle new technologies in upcoming new sensors, supporting features such as new staggered HDR sensors.

You’ll have noticed that video encoding support is limited to H.264 and H.265/HEVC with a lack of AV1 features. First of all – for a vision SoC such as the CV5 video encoding is a critical feature so we shouldn’t be drawing parallels to the decode-only AV1 feature that other mobile SoCs in the industry might support right now. Secondly, Ambarella says that there’s hesitation amongst its customers about AV1 due to the unclear situation about licensing, with many choosing to prioritise H.265 due to it being technically equivalent in practice, and while the licensing isn’t ideal, it’s at least well known and predictable. It’s an interesting point of view that gives a fresh perspective on the matter – and why other SoC manufacturers might not play ball with AV1 right now.

Beyond the raw spec sheet and capabilities of the SoC, what’s also important to be able to support all these features within a lower power envelope. Ambarella states the CV5 supports 8K30 recording in under 2W, while also offering 8K60 support at under 5W. Generally, those are fantastic numbers – particularly when you look at other industry 8K30 recording devices such as Canon’s power hungry and overheating prone R5 camera. Alongside the SoC architecture and proprietary IP blocks, the low power consumption is enabled by the CV5’s process which is manufactured on Samsung’s 5LPE node. In a product-to-product comparison, Ambarella is seeing a 30% power reduction compared to its previous generation 10nm SoCs, just due to process. 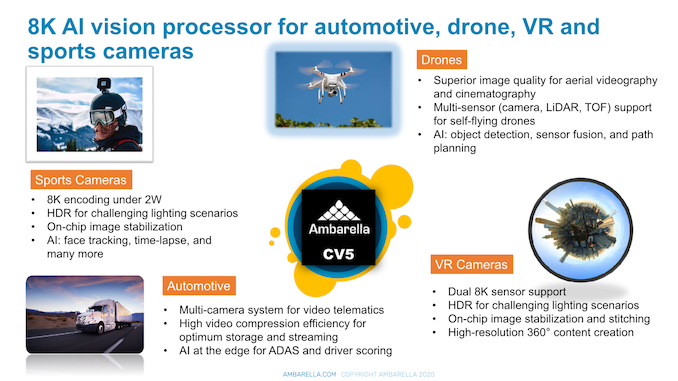 The CV5 is expected to be deployed in next-gen sports cameras, drones, automotive designs as well as interesting new products such as dual-8K VR cameras, fully taking advantage of the camera abilities of the new flagship chipset. Ambarella is planning to sample CV5 to customers in Q2 2021.$