The 2020 Browser Battle: Surfing With Speed

As websites have gotten more and more complex, the browser’s scripting performance has continued to be extremely important. To quantitatively analyze this performance, we turn to several web-based scripting tests. The specific tests we normally leverage are being expanded to include a wider variety of workloads to get a better handle on how each browser can handle them. And, just for fun, we are including some incredibly old scripting tests just to show why they are not used any longer. 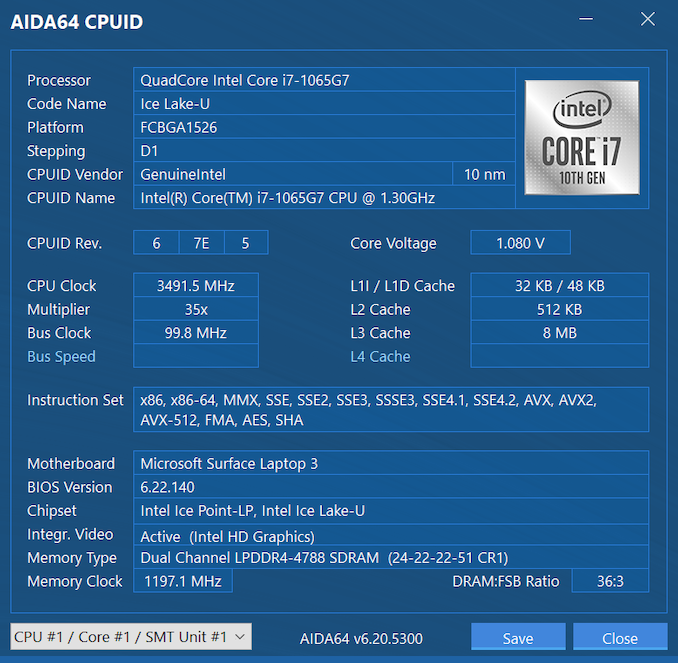 As far as hardware we are turning to the Microsoft Surface Laptop 3, featuring the Intel Core i7-1065G7 which is based on Intel’s 10 nm Ice Lake platform. It is set to run in its maximum performance mode during these tests to give the CPU its maximum boost. 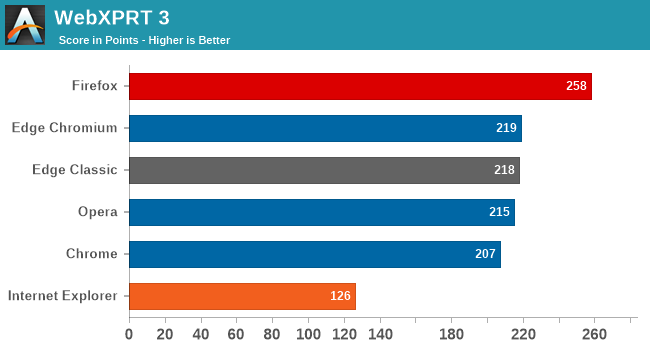 Rather than focus on a specific function, Principled Tehcnologies developed WebXPRT to simulate several real-world tasks with HTML5 and JavaScript, including photo enhancement, OCR scanning, AI, and more. If you would like to delve into how this benchmark works, and how the score is calculated, check out the report on WebXPRT as well as scoring.

In this first test, Firefox is the clear winner, easily outclassing all of the Chromium browsers which are all within a few points of each other. Interestingly, classic Edge and new Edge are almost tied. Internet Explorer does not fare as well. 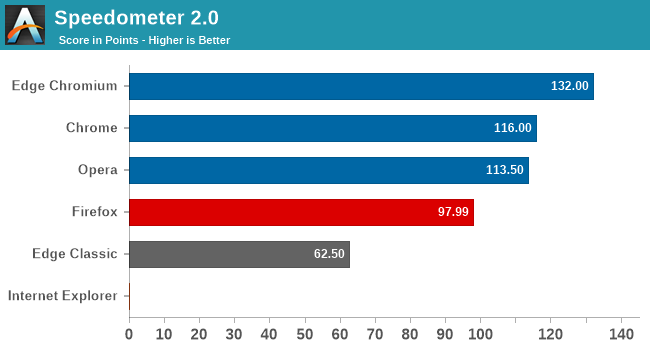 Created by Apple’s WebKit team, Speedometer 2.0 is a relatively simple test which involves adding, completing, and removing items in a to-do list. Speedometer 2.0 was created to measure the browser responsiveness. The test performs the to-do tasks with some of the most popular JavaScript frameworks available, and the score is a geometric mean of the different implementations of the to-do app, and then an arithmetic mean of the geometric means for each iteration. Apple warns against comparing the scores of different browser engines as they will do different work, which is why we use the same browser in hardware reviews.

For this test with different browsers, the scores are actually fairly similar for most browsers, although classic Edge and Internet Explorer both do poorly, with the latter not even loading the page. Interestingly, Chromium Edge does outperform the other Chromium browsers by a few points here. 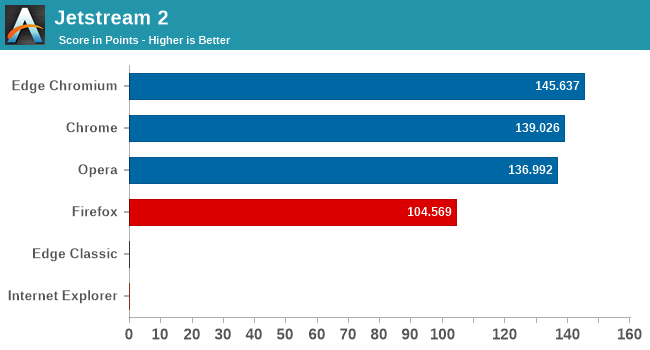 Combining JavaScript and Web Assembly benchmarks, and featuring 64 subtests, JetStream 2 includes part of some older popular scripting tests such as SunSpider and Octane 2, and each benchmark is weighed equally in the results with a geometric mean over each individual benchmark score to provide the final JetStream 2 score.

Again, we see Microsoft’s Chromium Edge slightly edge (pun intended) the other Chromium browsers. Mozilla Firefox is not quite as fast here as the Chromium browsers, and classic Edge and Internet Explorer both failed to load the test at all. 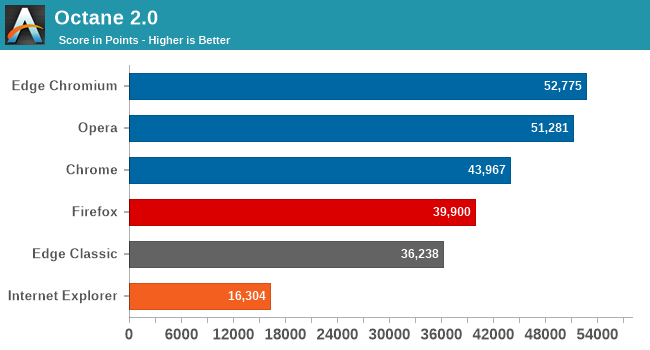 The original Octane was released in 2012, and the later Octane 2.0 was one of the most popular scripting performance benchmarks around. It focused on peak scripting performance, and as is the case, over time browser scripting engines had optimized their code to solve many of the bottlenecks that Octane was originally designed to put a spotlight on, and as such, the benchmark was retired by Google in 2017. New bottlenecks that were not being represented in Octane were common in popular sites, and this is a typical scenario with all benchmarks, but the web moves at a rapid pace.

Here we see some wide variation in results, with Chromium Edge again at the top of the stack, followed closely by Opera, and of course both are based on Chromium, but Google Chrome was not as performant on this test. All of the Chromium browsers did outperform all other browser though, with Firefox slightly behind Chrome here. Classic Edge was a bit further back, and of course Internet Explorer with its very outdated scripting engine was far behind the rest, although at least this test did run in IE 11. 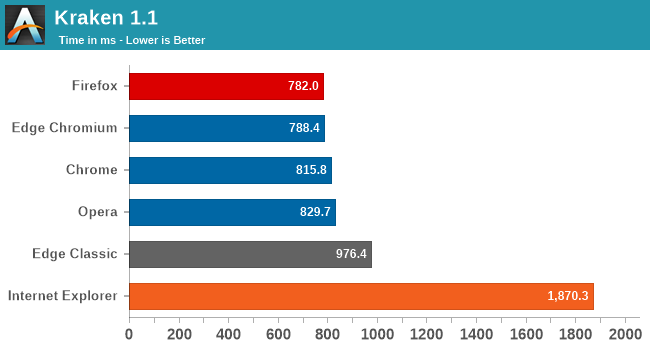 Created by Mozilla, Kraken runs several test cases from real-world applications and libraries, and includes 14 subtests. Results are reported in milliseconds to complete the tests, and as it is time-based, lower results are better.

Mozilla Firefox is our fastest browser in this test, although only by a hair. Again we see Microsoft’s implementation of Chromium Edge outperform the other Chromium browsers, although all of them are in the same range of results. Classic Edge takes a definite step back in performance here, and Internet Explorer trails the pack by a wide margin. 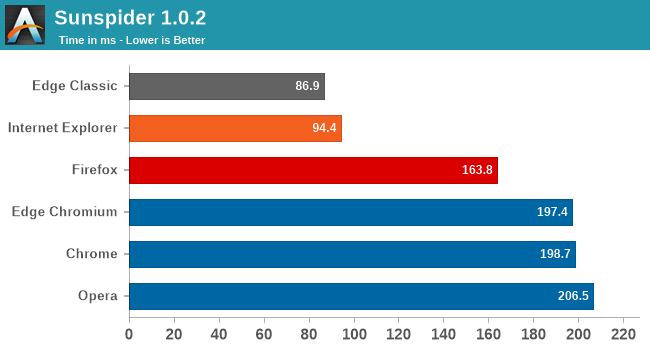 The last version of SunSpider was 1.0.2. Once this was likely the most popular scripting test around, and likely due to that, developers optimized their code to quickly overcome this test, and then found ways to work around it. SunSpider was retired and is no longer a relevant test, but since it is not too difficult to run, it was added just to see how modern browsers perform on it.

Interestingly Internet Explorer, and the newer browser based off of its code, classic Edge using EdgeHTML, both perform suspiciously high on this now retired benchmark. Whether that is due to Microsoft’s Chakra scripting engine still containing “optimizations” for SunSpider is somewhat irrelevant, as not only has the benchmark been retired, but both Internet Explorer and classic Edge are both also defunct as well.

With so many browser makers now using Chromium as their base, and contributing to its code, it should not be a huge surprise to see the Chromium browsers offering the highest scores here. Firefox does very well though, only a couple of points behind. Classic Edge, which has not been developed for over a year, is still quite compatible, but poor Internet Explorer is way behind the rest.