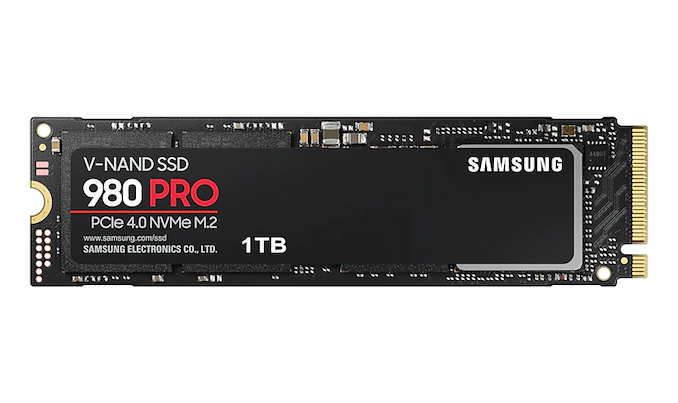 In what seems to be an accidental leak, a product page for the highly-awaited Samsung 980 PRO SSD was posted and later taken down from Samsung's website for Singapore. The 980 PRO was first previewed in January at CES as their first consumer SSD to support PCIe 4.0, but with very little technical information. No release date was announced but Samsung's PR said to expect more information in Q2.

The timing of this leak is unsurprising: if Samsung was planning for a Q2 or early Q3 release before COVID-19 hit, it makes sense for them to be preparing for a release in the near future. However, this leak brings a few surprise about what kind of product the 980 PRO will be. Since this wasn't an official, coordinated announcement, the specifications revealed may not be final and we still have no indication of pricing or launch date. But the big surprise is that the 980 PRO will apparently be using TLC NAND, a first for Samsung's PRO models. Samsung has been the last holdout offering high-end MLC-based SSDs while the rest of the SSD industry has moved on to TLC (and QLC), for both consumer and enterprise markets. Samsung provided an early indication that they may finally be abandoning MLC NAND in early 2019 when the TLC-based 970 EVO was replaced with the 970 EVO Plus, a refresh that switched from 64L to 92L TLC. There was never any sign of a corresponding 970 PRO Plus model in the works.

The switch from MLC to TLC means the rated write endurance of the 980 PRO will be half that of the 970 PRO and equivalent to the TLC-based 970 EVO and EVO Plus. The upside is that the 980 PRO may be more competitively priced against other high-end consumer NVMe SSDs. It's also quite possible that Samsung needed to introduce SLC caching in order to hit the 5GB/s write speeds they're promising for the 980 PRO.

The product page for the 980 PRO indicated that sequential read speed is now planned to be 7 GB/s, an improvement over the 6.5 GB/s listed earlier this year at CES. We also get our first look at random IO specifications, with the 1TB model hitting a maximum of 1M IOPS for either reads or writes. Performance at a queue depth of 1 is slightly improved over the 970 PRO and 970 EVO Plus, and post-cache sequential write speeds are also up from the 970 EVO Plus. This points to the 980 PRO as likely using Samsung's 1xx-layer 3D TLC rather than the 92L used in the 970 EVO Plus.

Power consumption from the 980 PRO is unsurprisingly higher than its predecessors, with the spec sheet showing 6.2W average and 8.9W in "burst mode". Samsung's high-end NVMe SSDs have already been fairly power-hungry, and making use of PCIe 4.0 speeds requires even more power. However, the 980 PRO should bring a substantial improvement in efficiency, because peak performance is doubling but power draw is not increasing by anywhere near that much. Samsung is likely following the same strategy as most other SSD controller designers by moving to a much newer fabrication process as part of the PCIe 4.0 transition.

The capacity options for the 980 PRO are a bit odd. The 970 PRO was offered in 512GB and 1TB capacities, and a 2TB capacity was hinted at but never made it to market. The lack of a 256GB option made some sense as that low capacity would likely not have been able to offer "PRO"-level performance. The 980 PRO moves to Samsung's typical TLC capacities: 250GB, 500GB, 1TB, but still omits the 2TB option that has been available from the EVOs. It seems likely that a 2TB 980 PRO model would be released at a later date.

Moving the 980 PRO to TLC NAND raises big questions for what to expect from a 980 EVO. Moving it to QLC NAND might be a bit premature, and would definitely be a big step down for that product line even if it added PCIe 4.0 support. My expectation is that any 980 EVO would more likely be a lower-performance, lower-power mainstream TLC drive, possibly without PCIe 4.0 support. Or to put it another way, an answer to the SK hynix Gold P31, which we think represents the direction the mainstream NVMe market segment is moving towards.