During Intel's unveiling of the Z490 chipset and Intel Core 10th generation Comet Lake processors, Intel also announced its series of Xeon W-1200 processors. To accompany this announcement, without much fanfare, Intel also launched the W480 chipset which also features an LGA1200 socket. Aiming for a more professional feel for processors with ECC support, vendors have announced a variety of W480 models. Some target content creators, and others for workstation environments. These boards are paired solely with W-1200, and support both ECC and non-ECC DDR4 memory.

The primary differences between the consumer and generally gaming-focused Z490 models and the W480 aren't as staggering one might think on paper. The difference is more product segmentation than anything else. W480 includes the key technologies which Intel has put into Comet Lake. Some of the notable technologies on Intel's Xeon W-1200 series processors include Turbo Boost Max 3.0 which boosts a single core far, and beyond the overall base frequency, e.g. the Intel Xeon W-1290P which is the top SKU has a base frequency of 3.7 GHz, with a maximum Thermal Velocity Boost single-core speed of up to 5.3 GHz. The P in the Xeon W-1200 series stands for performance, with a rated TDP of 125 W, with all of the product stack featuring support for up to 128 GB of DDR4-2933 ECC memory. 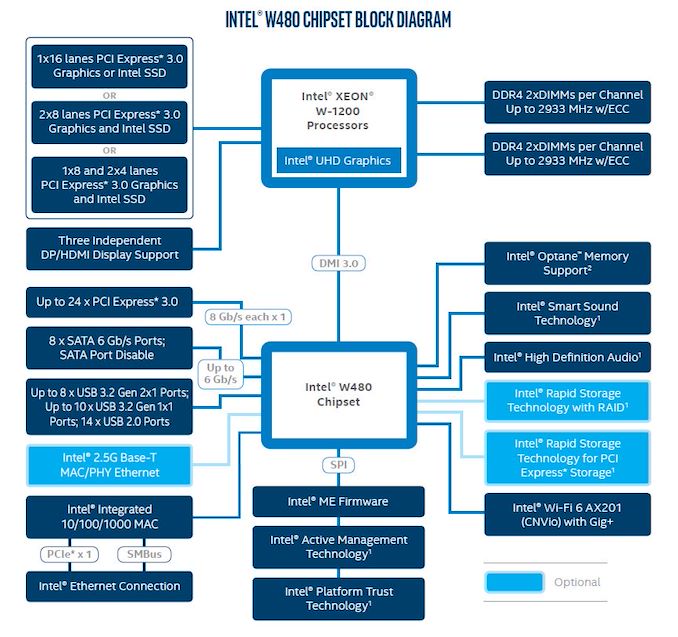 The Intel W480 chipset layout is identical to Z490. Some of the integrated features include up to 24 PCIe lanes, with some features optional and some as standard, with support for up to eight SATA ports, and allows vendors to choose which kind of USB connectivity is used dependant on model. I support for up to eight USB 3.2 G2 ports, with a maximum of ten USB 3.2 G1 ports, and fourteen USB 2.0 ports, although it has to be selective in the number of USB ports it uses, as each array uses a different amount of PCIe.

Intel has stuck with the 2.5 G Base-T MAC which allows vendors to easily add 2.5 GbE Ethernet controllers if they wish to do so. At the same time, it also allows the manufacturers to utilize Intel Rapid Storage technologies. Intel also includes an integrated Intel Wi-Fi 6 CNVi which will enable users to integrate a wireless interface up to and including an Intel AX201, which of course involves a higher cost which is passed onto the end-user. The most significant aspect to consider between W480 and Z490 is that W480 has official support for ECC memory, with up to 128 GB allowable in terms of capacity. Some of the older generations of Intel platforms from yesteryear has allowed cross-use between its Xeon E3-1200 series processors on its desktop chipsets, although Intel has completely segmented away the Xeon W-1200 range, so Xeon W-1200 is supported on W480 only.

While vendors weren't clamouring over themselves to unveil its W480 models during the initial announcement of W480 and Intel's Xeon W-1200 processors, the cat is out of the bag so to speak. At present, we've only been able to find ten models across six vendors in total at the time of writing, which isn't a large product stack. We do expect more models to be announced at a later date, but at present, it's anyone's guess as to who or what will be unveiled further down the line. Some of the vendors have stated that their products aren't really going to retail, and will end up mostly in the hands of system integrators who build these systems for their clients. 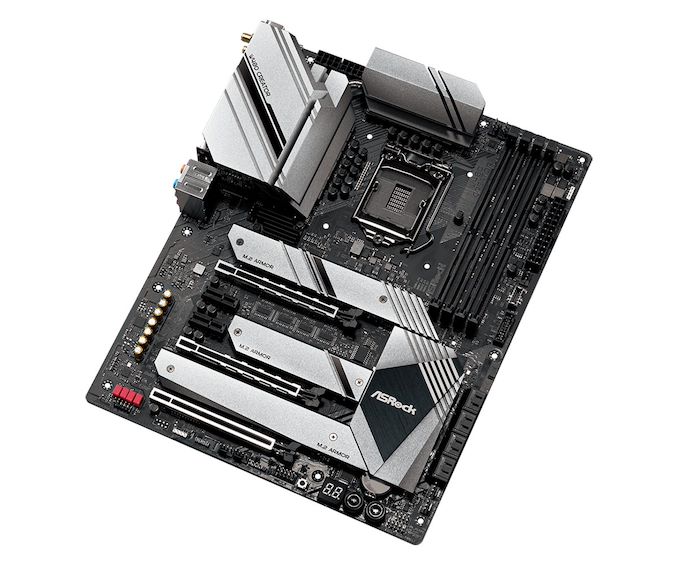 Focusing on the product stack, ASRock, ASRock Rack, ASUS, DFI, GIGABYTE, and Supermicro have announced some models. There's a mixture of ATX and micro-ATX. Some of the most premium models come from the big four vendors in terms of design, aesthetics and feature sets, with the stand out models including the premium ASRock W480 Creator. As the 'Creator' name suggests, it is targeting content creators with its dual Thunderbolt 3 Type-C rear panel connectivity, triple PCIe 3.0 x4 M.2 slots, and eight SATA ports. Another comes from GIGABYTE via the W480 Vision D, which has an exquisite white and black contrasting design and is resembles the former Designare range. Included in the W480 Vision D's feature set is Thunderbolt 3, triple PCIe 3.0 x4 M.2, and eight SATA ports, six of which include support for RAID 0, 1, 5, and 10, while the additional two ports come via an ASMedia SATA controller.

Another inclusion across the majority of the product stack is three or more USB 3.2 G2 rear panel connectivity, which is using Intel's W480 to its capabilities. One exciting example of this is the ASUS Pro WS W480-Ace with dual Thunderbolt 3 Type-C with a pair of DisplayPort inputs, with four USB 3.2 G2 Type-A ports for an impressive rear panel. No fewer than six of the ten W480 models incorporates three or more USB 3.2 G2 on the rear panel, including the trio of Supermicro models, the micro-ATX X12SCZ-TLN4F and X12SCZ-F, with the ATX X12SAE.

Motherboards Covered in This Overview

For quick links to each of the pages for each of the models covered in this W480 overview: