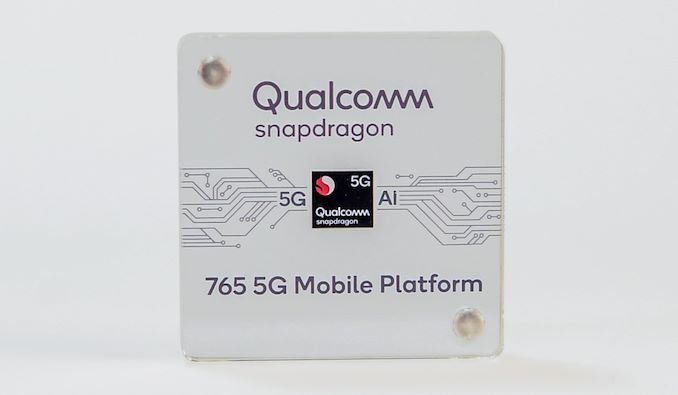 In terms of architecture, the new chips don’t differ as drastically to its predecessors as the flagship S865. On the CPU side, we’ve seen a slight change in the CPU layout, with the big cores now coming in a 1+1 Prime and Gold configuration, rather than an equal pairing as with the Snapdragon 730. We didn’t get more detailed info on the setup, but it’s likely that the new Prime core has larger L2 caches than the secondary big cores, if Qualcomm’s implementation here is similar to the larger flagship siblings. Clock frequencies on the Prime core have increased to 2.3GHz for the regular Snapdragon 765, whilst it goes up to 2.4GHz on the S765G. The secondary big core remains at 2.2GHz.

The big disappointment here is that these are still Cortex-A76 based CPU cores, so Qualcomm hasn’t actually updated the microarchitecture designs of the CPUs. In this regard, the new chip actually seems slightly inferior to the Exynos 980 with A77 cores, which targets the same device segment.

We continue to see 6x Cortex A55 cores at 1.8GHz alongside the big cores.

The biggest change in the SoC is the fact that this is Qualcomm’s first chipset to integrate a 5G modem. In terms of modem architecture, it’s said that the block is identical in functionality to the X55 external modem, just that it supports lesser bandwidth. 4G LTE speeds reach up to 1200Mbps download and 210Mbps upload, and 5G speeds aggregate over sub-6 as well as mmWave peak at 3700Mbps down and 1600Mbps up.

Qualcomm was keen to point out that unlike other vendors, they’re not skimping on mmWave connectivity at this category, although I do wonder if vendors will actually integrate mmWave modules on the devices with the SoC as it’s essentially a high-end feature on a more price-sensitive platform.

Also very interesting is the new SoC’s manufacturing process – it’s made by Samsung on their new 7nm EUV 7LPP node, meaning the premium SoC technically has a more advanced process technology than the flagship Snapdragon 865, although in practice this doesn’t necessarily mean it’s actually better in terms of characteristics.

The first Snapdragon 765(G) devices are expected to be released in the first quarter of 2020.

Overall, today’s launch was very exciting and hopefully we’ve been able to present to you with some exclusive clarifications on the new SoC platforms. 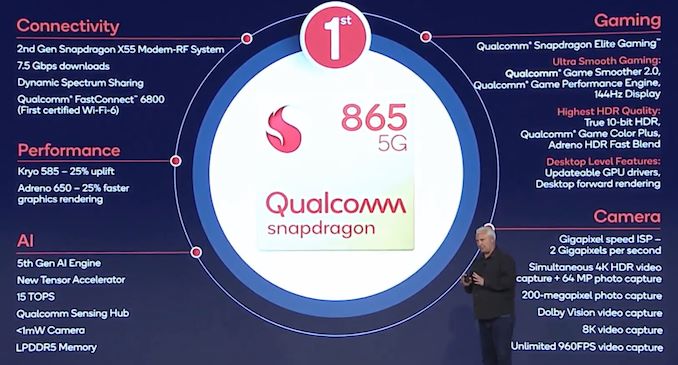 Qualcomm’s execution in recent years have been pretty much excellent, and flagship devices powered by Snapdragon SoCs have been always extremely well-rounded. Naturally we do wish the Android SoC vendors would put the pedal to the metal in terms of raw performance and efficiency and catch up with Apple’s designs, but when it comes to all other aspects of SoC design Qualcomm is in pretty much in a leadership role. That’s not to say the performance improvements of the new generation is disappointing, I’m expecting the new CPU cores to shine and Qualcomm has promises very healthy improvements in a generation where there have only been minor process node improvements.

Two big takeaways from today’s launch were camera and 5G. The camera capabilities of the Snapdragon 865 means that next year we’ll see some exciting new designs and a leap forward in camera capture experiences.

The Snapdragon 865 and 765 both supporting 5G to the fullest extend also means that the SoCs represent the foundation for 5G devices in 2020, and we expect vendors to 5G in their full line-up, with maybe only a few exceptions at the low and mid-low-range. I was quite doubtful about the value in buying X50 based 5G devices this year as they did have some crucial feature compromises, I don’t have the same qualms about the new X55 and X52 based platforms next year, and it’s likely the generation to get on board for 5G.

I’m excited to get my hands on the first Snapdragon 865 devices early next year, and hopefully we’ll be able to get more details on the platform in the next weeks and months to come.