The display of the Pixel 4 is one of the phone’s main features thanks to the 90Hz refresh rate. As mentioned in the introduction, the displays on the Pixel 4 series this year is again dual-sourced between LG and Samsung. The regular Pixel 4 receives an LG panel, while the 4 XL that we’re testing and reviewing today, uses a Samsung display.

Android Q promised to have implemented a new iteration of Google’s colour management system, and for the first time, the Photos app is actually able to properly display wide gamut pictures. Unfortunately, it’s still a very limited system in apps as they cannot display differing gamut pictures side-by-side, so for example the thumbnail view is shown only in sRGB. Most importantly, Chrome by default still doesn’t support wide-gamut content as you have to force it in the engine settings, and this implementation doesn’t use the OS’s CMS handling.

We move on to the display calibration and fundamental display measurements of the Pixel 4 XL screen. As always, we thank X-Rite and SpecraCal, as our measurements are performed with an X-Rite i1Pro 2 spectrophotometer, with the exception of black levels which are measured with an i1Display Pro colorimeter. Data is collected and examined using SpectraCal's CalMAN software. 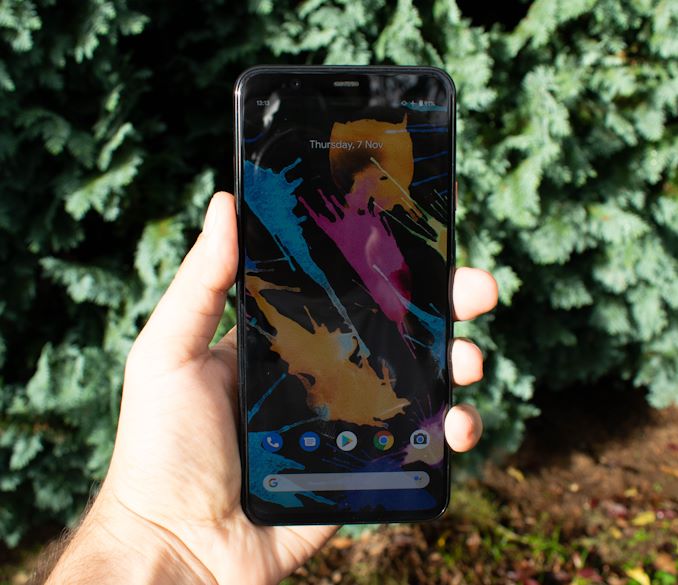 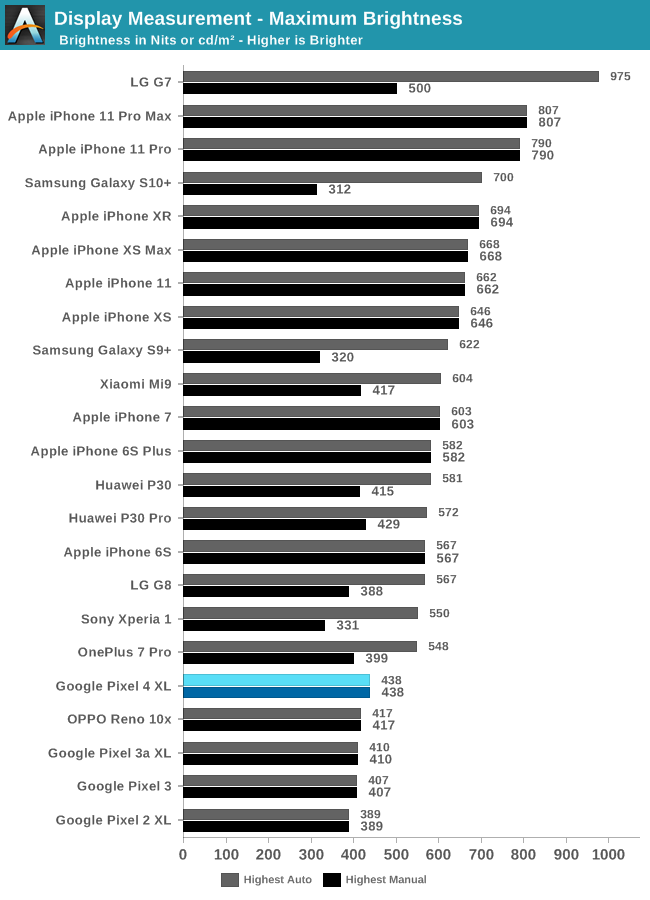 Starting off with the brightness, the Pixel 4 XL is relatively conservative as it peaks out at 438 nits in all scenarios. It’s again very odd here as Google can’t seem to make up its mind on whether it wants to offer an auto-brightness boost or not. Last year, the Pixel 3 only had it available in its Adaptive mode, whilst this year the Pixel 4 doesn’t offer it all, even though the display drivers actually has the high-brightness mode implemented.

In terms of greyscale calibration and accuracy, on my unit things differed greatly based on brightness. At maximum brightness, the Pixel 4 XL was seemingly quite accurate with good colour balance and gamma reproduction. At our standard 200cd/m² measurement point however, things are quite worse. First off, all there’s a more notable colour shift towards greens on the unit which isn’t great. Following that, there’s also creeping issues with the gamma calibration as it’s non-linear and deviates a lot more from the 2.2 target. What this results in is some shades, especially at the higher levels, appear darker than they should be.

I’ve also noted and captured some sort of bug in the display behaviour; when I was measuring at minimum brightness, I encountered some really bad results. I’ve seen this mentioned by some other reviewers and the issue went away when I toggled the screen refresh rate. The odd thing though, is that I wasn’t able to immediately reproduce it afterwards and results on the new measurements were quite ok. The colour shift the phone took was extremely noticeable at the time the bug took place. 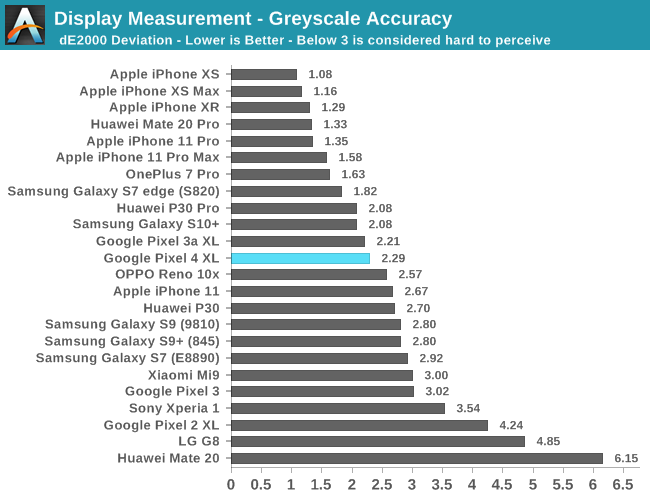 In terms of dE2000, the biggest culprit to the average 2.29 result for me is the green tint of whites as well as the slightly off gamma. 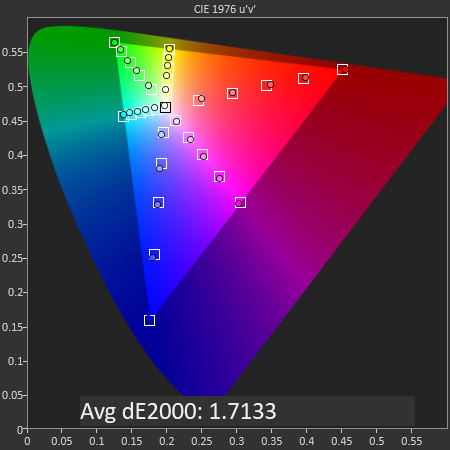 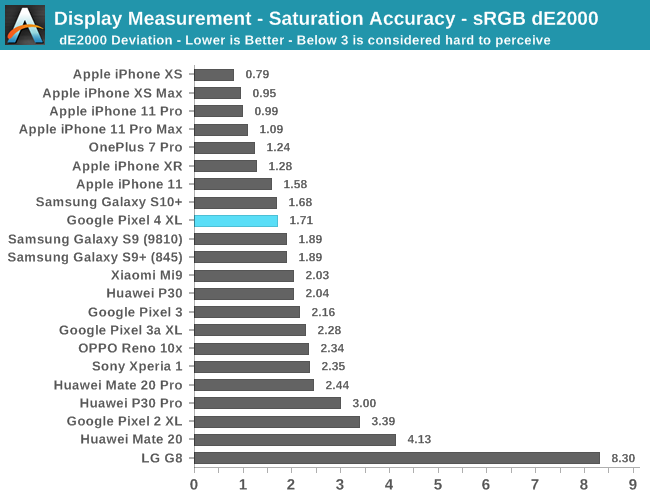 In the sRGB gamut, the Pixel 4 XL does well with a dE2000 of 1.71. The biggest issue again is a shift in the tones towards green, but also seemingly very slight oversaturation of all the tones. 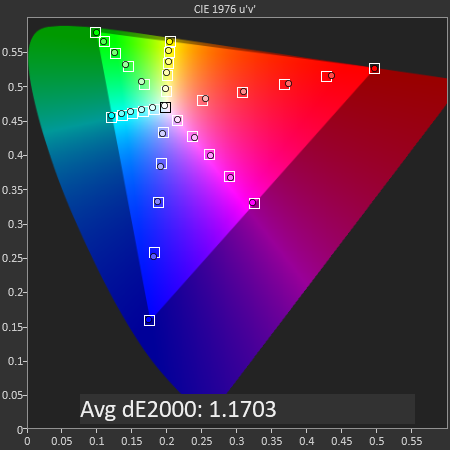 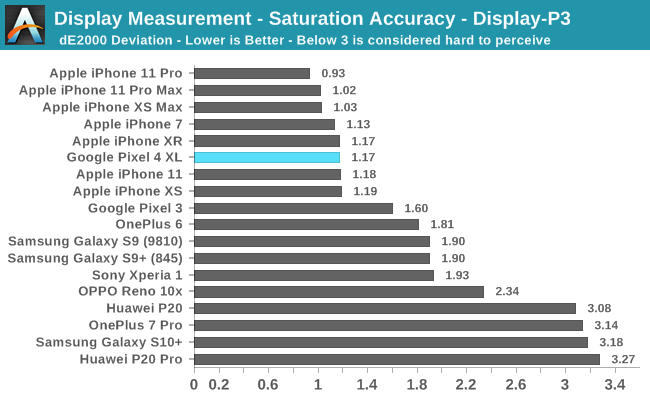 The Display P3 gamut performs a lot better. Here while the green tint is still present, the saturation levels are better and thus the Pixel 4 XL ends up with an excellent dE2000 of 1.17. 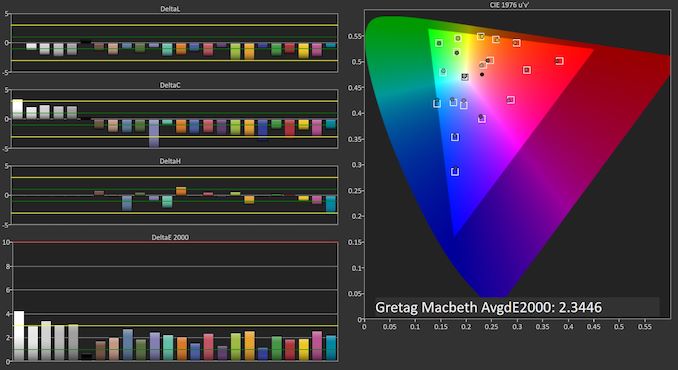 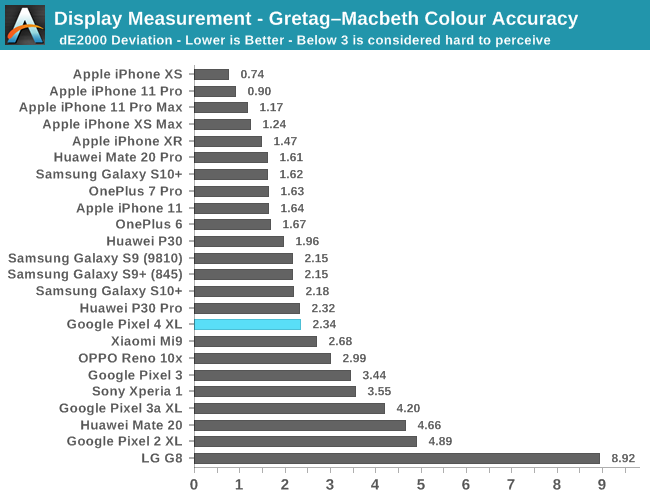 Finally, in the GMB test, the Pixel 4 XL ends up quite average with a score of 2.34 as it’s showcasing tones that are too dark, a green tint in the whites, with some hue errors for a few tones.

Display Conclusion – Good, but not A+

Overall, the Pixel 4 XL’s display characteristics beyond it’s 90Hz refresh rate are quite average. Whilst Google has been able to improve the calibration compared to what we measured on the regular Pixel 3 last year and the 2 XL the year before that, it’s still quite a bit behind what some other vendors are able to achieve. The display’s lower brightness is also a bit of an issue in direct sunlight as it lacks any kind of boost behaviour. Finally, the remaining characteristics such as viewing angles and sharpness are excellent, but that’s just generally a common characteristic of panels with these specifications.

The results today aren’t really a surprise to me given Google’s track record with the displays on the Pixel series, however it does stand in contrast to what the company was proclaiming at launch: “A+ rating Best Smartphone Display Awards” really doesn’t mean anything at all if, first of all, it’s a sponsored award, and secondly, if the measurements aren’t representative of a random production unit. Make of it what you will.