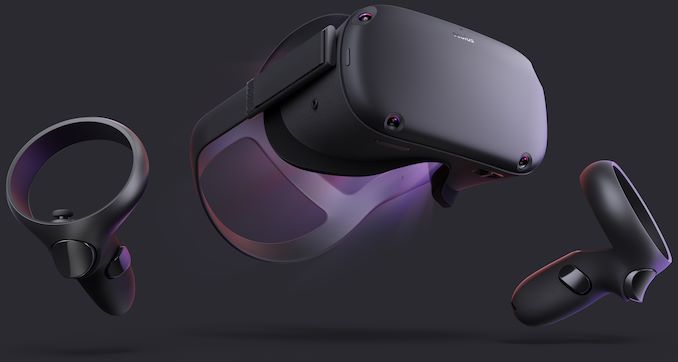 Oculus VR has announced a new software update for its standalone Oculus Quest VR headset that enables it to connect to a gaming PC and work like an Oculus Rift head mounted display (HMD). The Oculus Link software will be available in beta this November and will allow owners of the Oculus Quest with a proper PC to play games designed for the original tethered headset, essentially expanding addressable market for the titles and bringing new features to the device.

The Oculus Quest is a standalone VR headset based on the Qualcomm Snapdragon 835 SoC paired with a display of a 3200×1440 (1600×1440 per eye) along with Touch controllers supplied with the original Rift. One of the main features of the Oculus Quest is its inside-out 6-degree-of-freedom (6DoF) positional and controller tracking that does not require any external sensors. The unit has a USB Type-C connector for charging, but as it turns out it also can be used to connect the HMD to a compliant PC and play games designed for the Rift.

According to Facebook, most of high-quality USB Type-C cables will work with the Quest, so it looks like the device relies on a VirtualLink USB-C AltMode interface that needs 6 lanes of high speed data: 4 DisplayPort HBR 3 channels for video, a single USB 3.1 Gen 2 channel (2 lanes) for data, and a mandatory 15W of power. The manufacturer says that its own optical fiber cable for Oculus Quest will be available later this year and will provide enough bandwidth and plenty of length to move around the room when playing.

While the Oculus Quest has a fairly advanced mobile graphics subsystem, modern gaming PCs are much more powerful and therefore games for Oculus Rift are substantially better looking and provide a more immersive experience. By enabling PC connectivity on the Oculus Quest, Oculus VR makes those games more accessible. In addition, it encourages gamers with the standalone VR HMD to get a fully-fledged gaming PC.