There’s no mistaking the Surface Go for any other product. Microsoft has done a great job refining their tablet design over the years, and the Surface Go benefits from almost all of that refinement. It features the same silver magnesium finish as the rest of the lineup, and the distinctive chrome Microsoft logo on the rear. There’s a plastic strip at the top which lets the RF through, and the kickstand which has been the defining design element of all Surface tablets. The Surface Go features the same infinitely adjustable hinge as the Pro, and it opens wide enough to be used as a drawing surface. 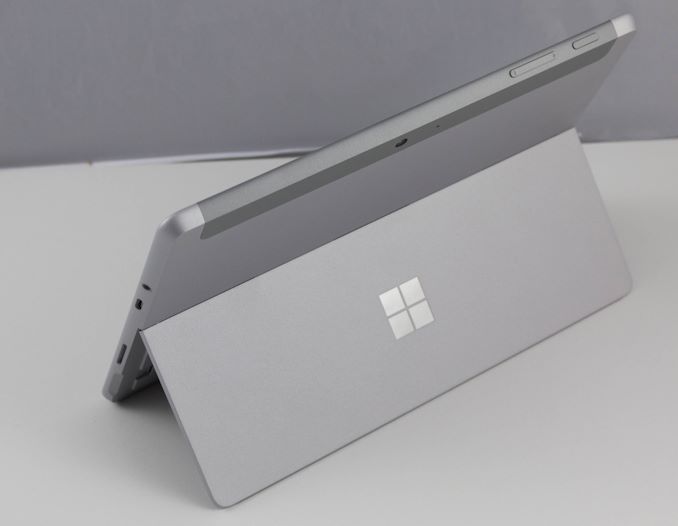 The Surface Go features nicely rounded edges, which was a design feature Microsoft introduced with the Surface Pro 5 in 2017, and it gives the design a software in-hand feel compared to the previous models. The Surface Go is also slightly thinner than the Surface Pro 6, although almost imperceptibly so.

The one design feature that has unfortunately not made it into the Surface Go is the thinner display bezels found on many recent devices. By today’s standards, the bezels on the Surface Go are thick, and it would have been nice to see a larger display in this size of chassis. The bezels do give you somewhere to hang on if using the Go as a tablet, but they don’t need to be this large to achieve this result, and make the Go look like a somewhat dated design despite it being brand new. In reality the bezels are not much wider than the Surface Pro 6, but with the smaller display, the proportion of bezel to display is higher. 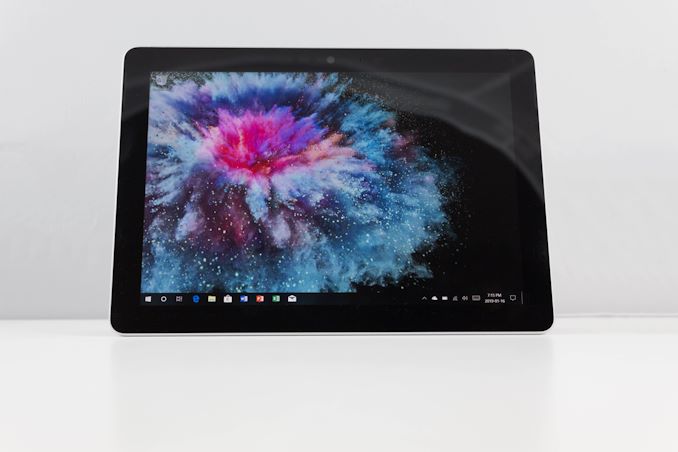 On the top bezel is the front facing camera, which also offers IR for Windows Hello facial recognition, and the Windows Hello is very accurate, even if it’s a touch slower to use on this model. For video conferencing, the Surface Go offers a 5 MP camera on the front which can do 1080p video. The rear camera is an 8 MP auto-focus unit. Unlike some of the more expensive Surface products, the Surface Go features just a single microphone, so it likely won’t be as good for long-range Cortana.

All of the ports are on the right side of the device, with the Surface Connect port at the bottom, and the USB Type-C and headset jack closer to the top. If there’s a Surface redesign, it would be nice to see the headset jack find a better location to avoid the cable being in such an awkward spot, although the Go does offer the headset jack quite a bit lower than the Pro does. There’s also a microSD slot under the kickstand on the right side.

The left side has only one opening, and that is for the nano SIM card.

Despite the Surface Go being a less-expensive model, it really feels like a smaller version of the Pro, with the same, fantastic kickstand design, and the same magnesium chassis. The only real knock against the Go’s design is the display bezels, which harken back to an earlier era. The real advantage for the Surface Go is the smaller size, and much lower weight than the Pro. A Surface Pro 6 is 770 grams for an i5 model, and the Go is just 515 grams, or 33% lighter. That makes for an extremely portable PC.

As with all Surface tablets, the Surface Go isn’t really complete without some accessories. 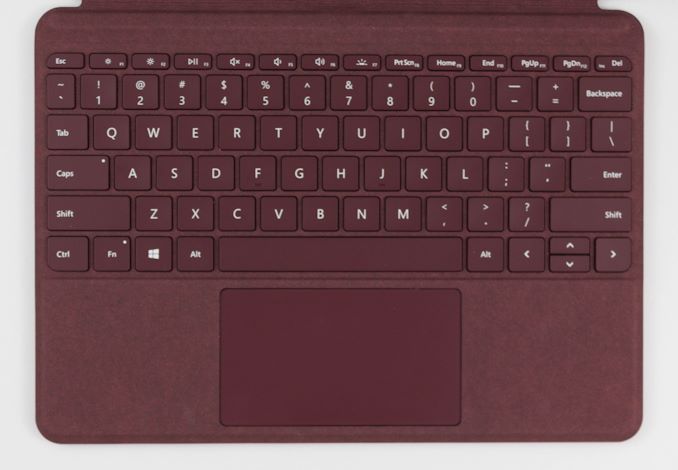 Microsoft offers several choices for the Type Cover, which is the one essential accessory for any Surface Go. Although there is sometimes some criticism about why this is a separate purchase, it gives the buyer the ability to customize their Surface Go’s color scheme. Some retailers also offer bundled purchases, so you can have it either way.

The base Type Cover is the standard black model, which offers a soft plastic cover around the built-in keyboard, and it retails for $99. Those that want a bit more color, and a bit more refinement, can go for a Signature Type Cover, which is wrapped in Alacantara just like on the Surface Pro, and is available in Burgundy, Platinum, or Cobalt Blue. The Signature Type Covers retail for $129, and for $30 are a worthwhile upgrade if you are in the market. The Alcantara gives a great feel, especially when the device is closed, and being a synthetic fabric, holds up pretty well over time.

The trackpad offered on the Type Cover is excellent, with a smooth glass top that offers great precision. If you recall the original, tiny trackpads Microsoft used to offer, this is perhaps the most obvious improvement. Despite the smaller dimensions of the Surface Go, the trackpad is well-sized.

The downside of moving to a smaller form factor in the Surface Go, compared to the Surface Pro, is that they keyboard is also shrunk to accommodate the smaller dimensions of the device. Although they keyboard offers the same edge-to-edge keys as the Pro, that edge-to-edge dimension is small enough that the keyboard is fairly cramped. If you have large hands, this is likely not the device for you because of this. If you don’t mind a smaller keyboard, the quality of the keyboard, and the key feel, coupled with the three levels of backlighting, make this a great keyboard, but the small size takes a lot of getting used to, and causes a lot of mis-types when adjusting. 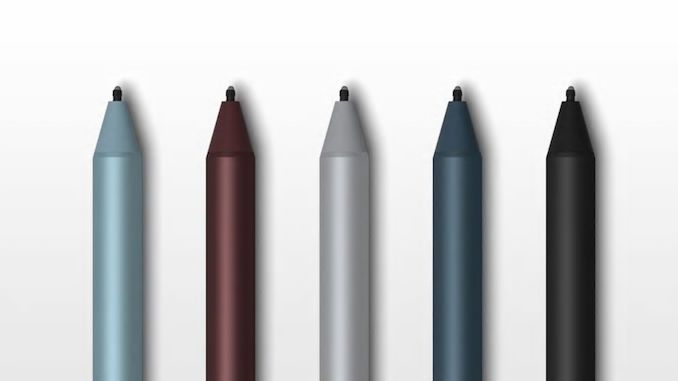 Although not necessarily as essential as the Type Cover, the same Surface Pen as the rest of the Surface lineup is also available for the Surface Go, and the pen can be magnetically attached to the left side for storage, although the rounded edges don’t make it quite as tight of a fit as on the Pro. The pen can also be purchased in the same color scheme as the type covers, which means black, burgundy, platinum, or cobalt blue are all available to color coordinate with the cover.

The Surface pen is one of the best writing devices available on a tablet, with 4096 pressure levels, tilt support, and very low latency. That coupled with the thin display stack, makes the Surface Go an excellent choice for notes, and the writing experience is really a great experience. The Surface Pen tips are also interchangeable, and you can purchase a set of tips with various thicknesses, and Microsoft continues to offer a great tip feel, where there’s just enough traction on the glass that it makes you feel like you’re connected to a real pen. 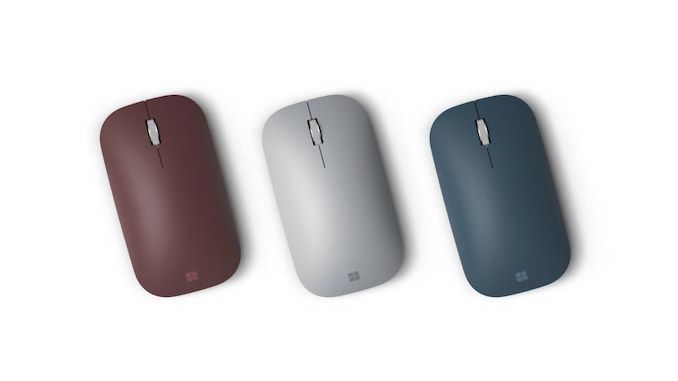 If you prefer to use a mouse over a trackpad, the Surface Mobile Mouse is a Bluetooth connected mouse with seamless scrolling, a compact form factor, and the same color options as the rest of the accessories to coordinate. It features the Microsoft BlueTrack technology and the battery life from the two AA batteries is rated for up to 12 months.