It has been hard to miss the fact that Intel has been vacuuming up a lot of industry talent, which brings with them a lot of experience. Renduchintala, Koduri, Keller, Hook, and Carvill, are just to name a few. This new crew has decided to break Intel out of its shell for the first time in a while, holding the first in a new tradition of Intel Architecture Days. Through the five hours of presentations, Intel lifted the lid on the CPU core roadmaps through 2021, the next generation of integrated graphics, the future of Intel’s graphics business, new chips built on 3D packaging technologies, and even parts of the microarchitecture for the 2019 consumer processors. In other words, it's many of the things we've been missing out on for years. And now that Intel is once again holding these kinds of disclosures, there’s a lot to dig in to.

Intel covered a good amount of ground at the Architecture Day, which we’ve split into the following categories:

It is common for companies like Intel to ask members of the press what they enjoy about announcements from Intel, Intel’s competitors, or other companies in the industry. One of answers I will never tire of saying is ‘roadmaps’. The roadmap is a simple document but it enables a company to explain part of its future plans in a very easy to understand way. It shows to the press, to customers, and to partners, that the company has a vision beyond the next product and that it expects to deliver at a rough cadence, hopefully with some markers on expected performance additions or improvements. Roadmaps are rarely taken as set in stone either, with most people understanding that they have an element of fuzziness depending on external factors.

To that end, I’ve been requesting Intel to show roadmaps for years. They used to be common place, but ever since Skylake, it has kind of dried up. In recent months Intel has shown rough datacentre roadmaps, with Cascade Lake, Cooper Lake, and Ice Lake and the next few generations. But for the Core family it has been somewhat more difficult. Depending on which analyst you talk to, a good number will point to some of the Skylake derivatives as being holding points while the issues with 10nm have been sorted out. But nonetheless, all we tend to hear about is the faint whisper of a codename potentially, which doesn’t mean much. 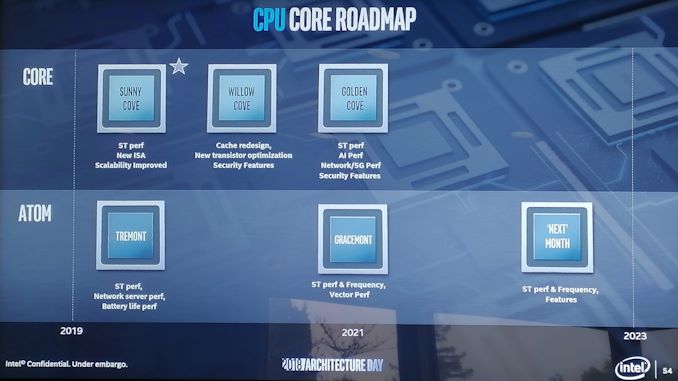 For the high performance Core architecture, Intel lists three new codenames over the next three years. To be very clear here, these are the codenames for the individual core microarchitecture, not the chip, which is an important departure from how Intel has previously done things.

Sunny Cove, built on 10nm, will come to market in 2019 and offer increased single-threaded performance, new instructions, and ‘improved scalability’. Intel went into more detail about the Sunny Cove microarchitecture, which is in the next part of this article. To avoid doubt, Sunny Cove will have AVX-512. We believe that these cores, when paired with Gen11 graphics, will be called Ice Lake.

Willow Cove looks like it will be a 2020 core design, most likely also on 10nm. Intel lists the highlights here as a cache redesign (which might mean L1/L2 adjustments), new transistor optimizations (manufacturing based), and additional security features, likely referring to further enhancements from new classes of side-channel attacks.

Golden Cove rounds out the trio, and is firmly in that 2021 segment in the graph. Process node here is a question mark, but we’re likely to see it on 10nm and or 7nm. Golden Cove is where Intel adds another slice of the serious pie onto its plate, with an increase in single threaded performance, a focus on AI performance, and potential networking and AI additions to the core design. Security features also look like they get a boost.

The lower-powered Atom microarchitecture roadmap is on a slower cadence than the Core microarchitecture, which is not surprising given its history. Seeing as how Atom has to fit into a range of devices, we’re expecting there to be a wide range in capabilities, especially from the SoC side.

The upcoming microarchitecture for 2019 is called Tremont, which focuses on single threaded performance increases, battery life increases, and network server performance. Based on some of the designs later in this article, we think that this will be a 10nm design.

Following Tremont will be Gracemont, which Intel lists as a 2021 product. As Atom is designed to continually push both the performance at the high-end of its capabilities and the efficiency at the low-end, Intel lists that Gracemont will have additional single threaded performance and a focus on increased frequency. This will be combined with additional vector performance, which likely means that Atom will get some wider vector units or support new vector instructions.

Beyond this will be a future ‘mont’ core (and not month as listed in the image). Here Intel is spitballing what this new 2023 core might have, for which the general listing of performance, frequency and features is there.

As stated above, these are just the microarchitecture names. The actual chips these cores are in will likely have different names, which means a Lake name for the Core microarchitecture. At the event, Intel stated that Ice Lake would have Sunny Cove cores in it, for example.

Another aspect to Intel’s presentations was that future microarchitectures are likely to be uncoupled from any process technologies. In order to build some resiliency into the company’s product line moving forward, both Raja Koduri and Dr. Murthy Renduchintala explained that future microarchitectures will not be process dependent, and the latest products will come to market on the best process technologies available at the time. As a result we’re likely to see some of the Core designs straddle different manufacturing technologies.

Intel also went into a bit of detail on microarchitecture of Sunny Cove.

Sunny Cove Microarchitecture: A Peek At the Back End
Tweet
PRINT THIS ARTICLE
Comments Locked