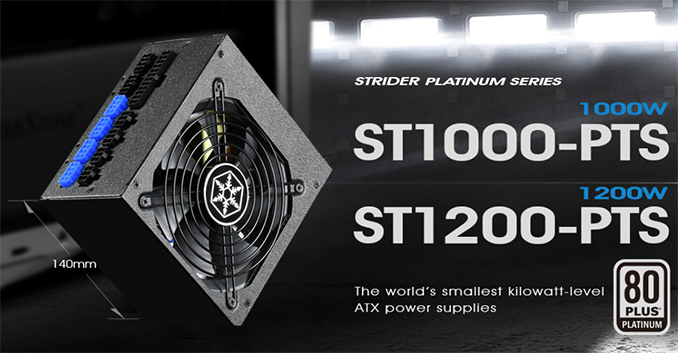 While no-compromise high-end desktops continue to be formidably big (with some of them capable of integrating two motherboards), there are a lot of people who prefer smaller HEDTs.  Motherboard makers release enthusiast-class Mini-ITX and Micro-ATX platforms supporting rather rich expansion capabilities, so there is demand for smaller high-end PSUs and chassis. SilverStone was among the first makers of power supplies to offer high-wattage Mini-ITX PSUs, and last year it released a relatively short 1.5 kW ATX PSU. This week the company is making another step towards miniaturization of high-wattage PSUs and launched its 140-mm deep Strider Platinum PTS power supplies. 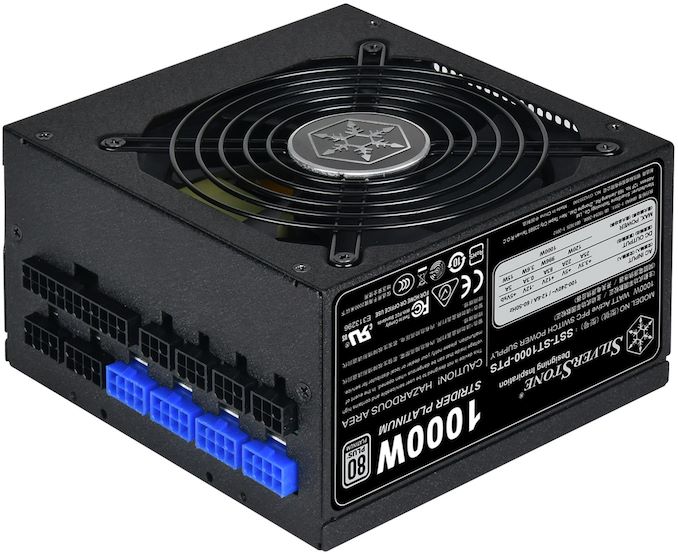 The SilverStone Strider Platinum PTS family – not to be confused with the Strider Platinum PT family – are ATX12V V2.4-compliant PSUs specifically designed for their shorter depth, with SilverStone offering 1000 W and 1200 W models. The power supplies conform to the 80 Plus Platinum requirements, so they are they are mandated to be 89% - 94% efficient under a 50% or 100% load as well as 90% - 92% efficient under a 20% load. The latter enables to take advantage of energy efficiency of modern PC hardware even with high-wattage PSU. Meanwhile, like other modern power supplies, the PSUs are outfitted with over current, over power, over/under voltage, over temperature, and short circuit protection technologies.

SilverStone’s “small” (or short, depending how you put it) Strider Platinum PTS 1000 W and 1200 W PSUs feature a single +12 V rail design with a strict ±3% voltage regulation as well as low ripple and noise. The power supplies are outfitted with a 120-mm hybrid ceramic bearing (HYB) fan that spins at 1000 RPM (at 18 dBA) when the load is 50% or below and spins up to 1800 RPM when the load gets higher. As an added bonus, SilverStone bundles its FF122 magnetized fan filter with its new power supplies.