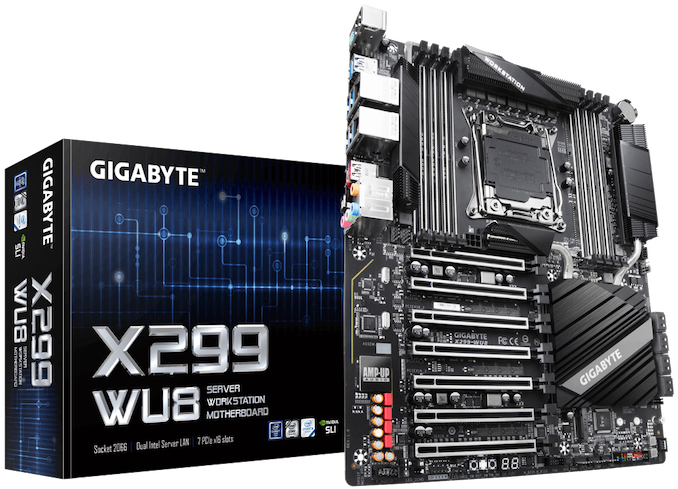 In what appears to be a silent launch, GIGABYTE has launched a new workstation motherboard called the X299-WU8. The new GIGABYTE X299-WU8 has a total of seven full-length PCIe 3.0 slots with a consumer-professional convergent aesthetic due to waves of stainless steel PCIe armor slot protection as well as offering full support for NVIDIA Quadro professional graphics cards and server grade network ports.

The crux of the GIGABYTE X299-WU8 includes the implementation of two Broadcom PLX8747 PCIe switches. This allows the board to operate at either x16/x16/x16/x16 or x16/x8/x8/x8/x8/x8/x8, for GPUs or FPGAs or other PCIe accelerators. The GIGABYTE X299-WU8 is based on the Intel X299 HEDT chipset and according to the supported CPU list on the GIGABYTE website, looks ready for the new Inel Basin Falls Skylake-X refresh such as the new 18-core i9-9980XE processor which is just around the corner to being released onto the market. While there is no official information on the boards inclusive power delivery, the X299-WU8 features dual 8-pin 12 V CPU power inputs, a 24-pin ATX 12 V motherboard power input and a single 6-pin PCIe power input for the boards PCIe slots. 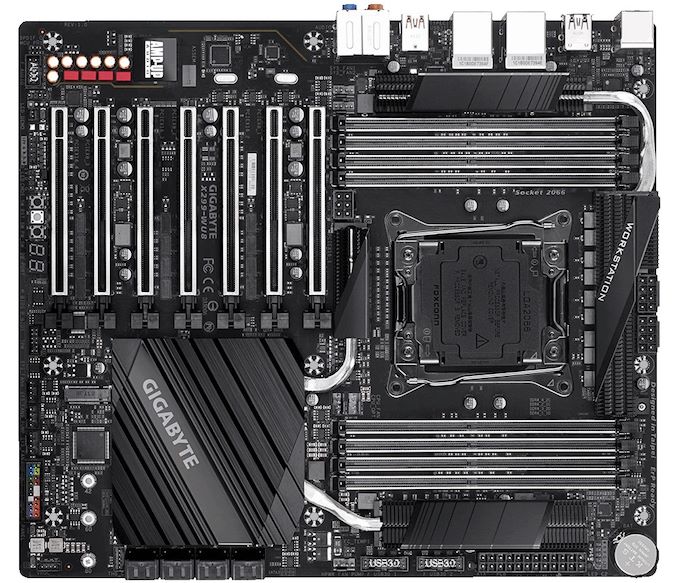 Memory support is catered for with eight slots offering users the capability to install up to 128 GB - this is due to using the consumer UDIMMs, rather than anything ECC (this board does not support ECC, because the processors do not). The official specifications states support for up to DDR4-2666 as per the Skylake-X processor specifications, but the official QVL memory support list shows support for DDR4-4000 through the use of X.M.P 2.0 profiles. The X299-WU8 conforms to the CEB form factor which is similar to E-ATX, but users looking to pair this board up with an existing E-ATX case should err on the side of caution and physically check sizing for possible complications and constraints.

More interestingly along the bottom edge of the boards PCB is an LED debug, a power switch, a reset switch and clear CMOS switch all located next to each other. Also alongside these is two full RGB LED headers with support for RGBW LEDs and runs in conjunction with the GIGABYTE RGB Fusion software. Like a true server board, a lot of the attention is aimed at cooling with a total of eight 4-pin fan headers with a combined total of nine different temperature sensors located across the board. All of these 4-pin headers work in tandem with the GIGABYTE Smart Fan 5 utility and the sensors and headers are also interoperable with each other. 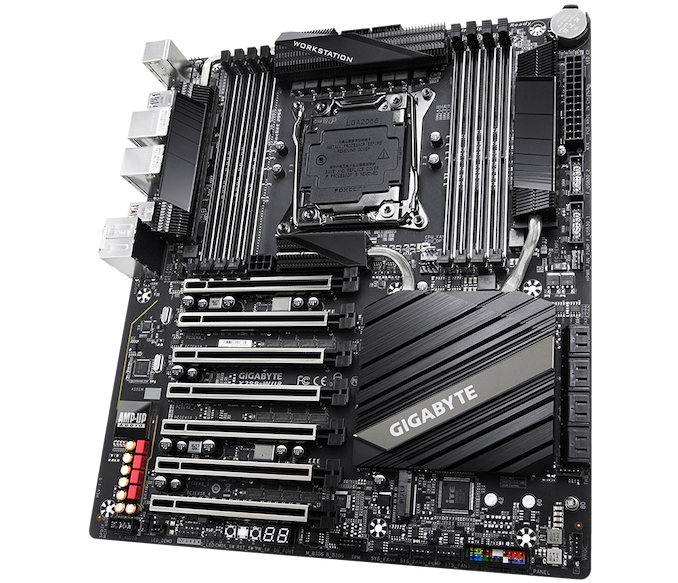 Focusing on the storage the GIGABYTE X299-WU8, there's a total of eight SATA ports with support for RAID 0, 1, 5 and 10 arrays. In addition to this is a single PCIe 3.0 x4/SATA capable M.2 slot which allows drives up to and including M.2 2280 to be installed; this slot is located just below the X299 chipset heatsink. This board is also certified ready for support with Intel's Optane memory modules.

The X299-WU8 consumer workstation board also makes use of dual Intel-based server Gigabit LAN ports with the exact controllers currently unconfirmed (I211-AT?), but will most probably allow for teaming between the LAN. Onboard audio is facilitated by five 3.5 mm audio jacks and a single S/PDIF optical output due to the inclusion of a Realtek ALC1220-VB HD audio codec. USB real estate consists of two USB 3.1 Gen2 ports with a Type-A and Type-C both present, with an additional six USB 3.1 Gen1 Type-A ports and two further USB 2.0 ports. Finishing off the rear panel on the X299-WU8 is a PS/2 keyboard and mouse combination port. Users looking to bolster the USB further will be happy to know that the GIGABYTE X299-WU8 includes a pair of USB 3.1 Gen1 front panel headers for an additional four USB 3.1 Gen1 Type-A ports.

The current pricing and availability is yet unknown, but the GIGABYTE X299-WU8 will support the impending Basin Falls Intel Skylake-X refresh processors including the Core i9-9980XE, Core i9-9960X and the rest of the upcoming Basin Falls desktop SKU list. The target is clearly on the workstation market, but GIGABYTE looks to have amalgamated elements from their AORUS gaming range as RGB support is included and the board's accessories bundle is set to include a 12-month license to XSplit Gamecaster and Broadcaster. One of the key features will be the extra PCIe bandwidth afforded by the PCIe switches, so users with lots of PCIe requirements only need apply. We also know that those PLX8747 chips are super expensive, so we might be looking at nearly $1000 for this board. I guess at that price, they couldn't even throw in a 10G NIC. Users will have to buy their own, and thankfully there are enough slots for one.

We have reached out to GIGABYTE for more information.