Our evaluation routine for storage bridges borrows heavily from the testing methodology for direct-attached storage devices. The testbed hardware is reused. CrystalDiskMark is used for a quick overview, as it helps determine availability of UASP support and provides some performance numbers under ideal scenarios. Real-world performance testing is done with our custom test suite involving robocopy bencharks and PCMark 8's storage bench.

Comparing the '4K Q32T1' and '4K' numbers can quickly tell us whether the storage device supports NCQ (native command queuing) / UASP (USB-attached SCSI protocol). If the numbers for the two access traces are in the same ballpark, NCQ / UASP is not supported. This assumes that the host port / drivers on the PC support UASP. We can see that the M2X enclosure has no trouble with UASP support.

The test starts off with the Photos folder in a RAM drive in the testbed. robocopy is used with default arguments to mirror it onto the storage drive under test. The content on the RAM drive is then deleted. robocopy is again used to transfer the content, but, from the storage drive under test to the RAM drive. The first segment gives the write speed, while the second one gives the read speed for the storage device. The segments end with the purge of the contents from the storage device. This process is repeated thrice and the average of all the runs is recorded as the performance number. The same procedure is adopted for the Videos and the BR folders. Readers interested in looking at all the graphs in one shot can choose the 'Expand All' option in the dropdown menu. 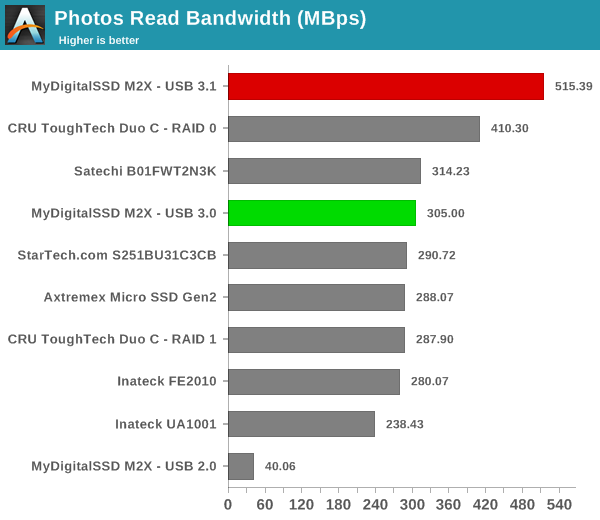 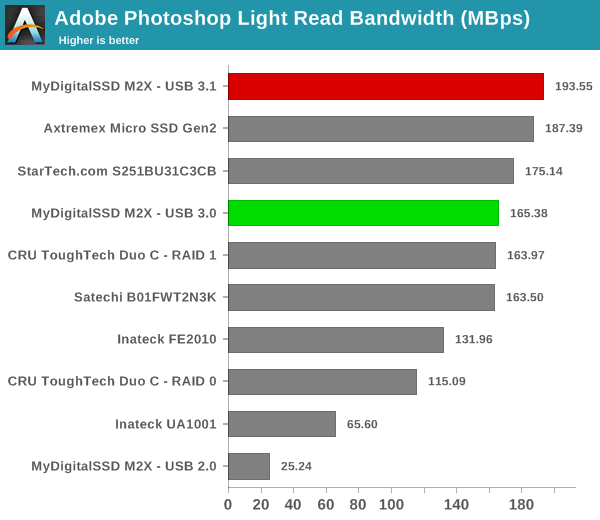 As expected, the M2X simply outperforms every other USB storage bridge that we have tested so far (note that we don't have any Thunderbolt 3 external SSDs in the graphs). The move to USB 3.1 Gen 2 in various enclosures has now finally met its match in the form of a downstream M.2 NVMe port. While USB 3.0 couldn't effectively saturate SATA SSDs, USB 3.1 Gen 2 could. In fact, it left a lot of performance on the table since the bottleneck was shifted to the SSD side. With the M2X enclosure, we see that the bottleneck is now back to the USB side.