The Mi MIX 2 comes with a Snapdragon 845 and we’ve more extensively covered the performance and characteristics of the SoC in our performance preview as well as in the Galaxy S9 review. So while we’re not expecting any surprises in terms of performance, we’ll see that software configurations can be differ quite a bit from the implementation that we’ve tested on Samsung’s devices. 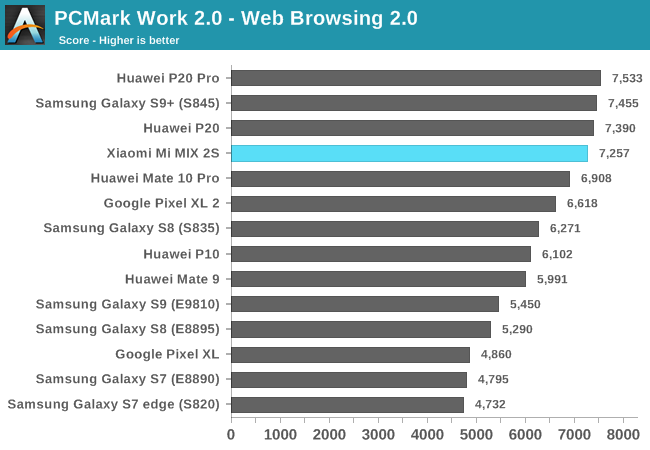 In the PCMark’s Web Browsing 2.0 test the difference in performance isn’t too great. The test’s workload has become relatively light-weight enough in that its tasks have become short enough to not fully migrate to larger cores at the peak operating performance points. 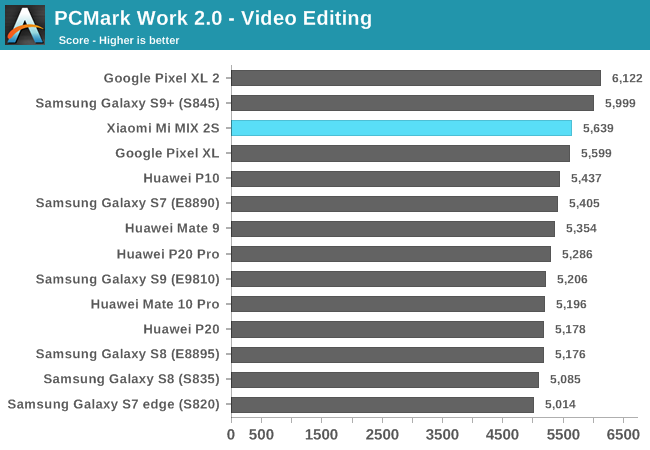 The video editing test is also a test in which most of today’s flagships only show minor differences between each other. 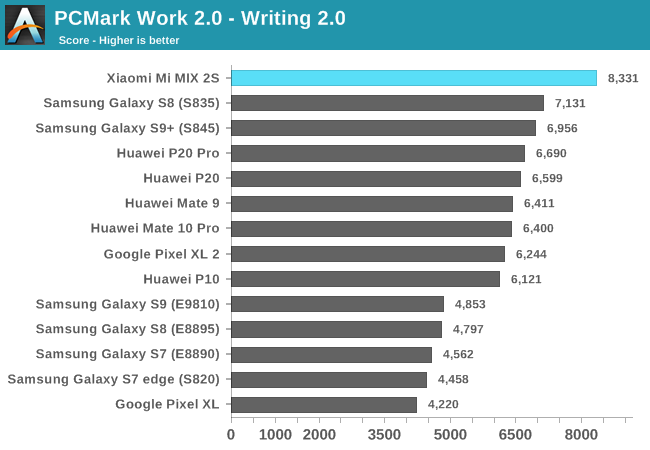 While the first two PCMark tests are reaching their limits in terms of performance scalability, the writing test is still insanely sensitive to both peak performance as well as performance latency. The test uses native Android APIs for text manipulation and also renders PDFs out of the resulting document. Here the Mi MIX 2S actually showcases a significant jump over the Galaxy S9+, and actually finally come near or even beats the scores of the QRD845 platform from Qualcomm that we previewed back in February. 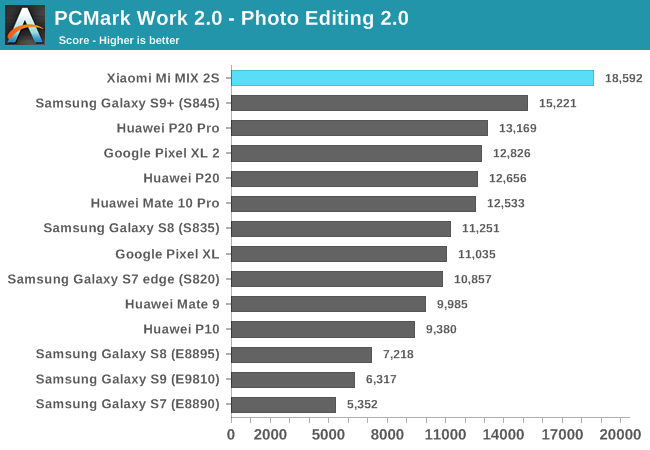 The Photo Editing test is also characterized by short but heavy enough bursts of work. Again the MIX 2S shows a significant improvement over the Galaxy S9 and leaves all other devices in its trail. 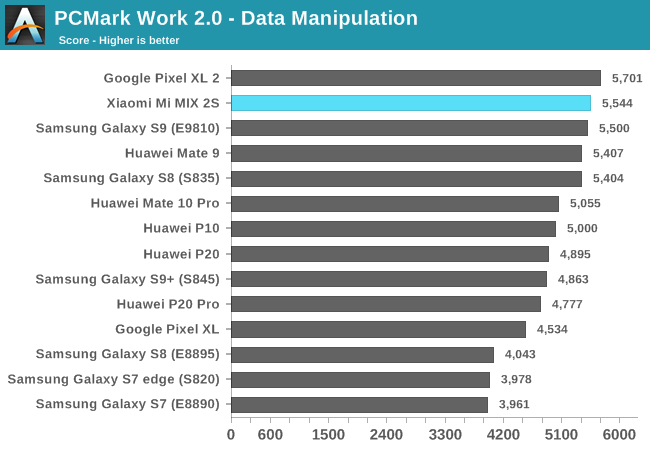 Finally the Data Manipulation test is a lot more evened out – this is mainly a single-thread bound workload, which also seems to be very memory latency sensitive as the Snapdragon 845 devices have trouble differentiating themselves from last year’s 835 units – a scenario that we also see in the Kirin 970 devices from Huawei. 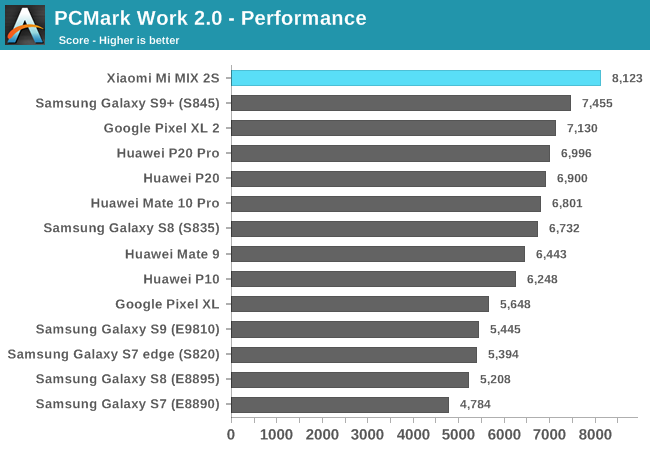 Overall, the MIX 2S trumps the Snapdragon Galaxy S9 as the fastest Android device. This also very much reflects in daily usage as the phone is incredibly fast in terms of subjective usage, and in my view, is to date by far the fastest device I’ve had the pleasure to use. 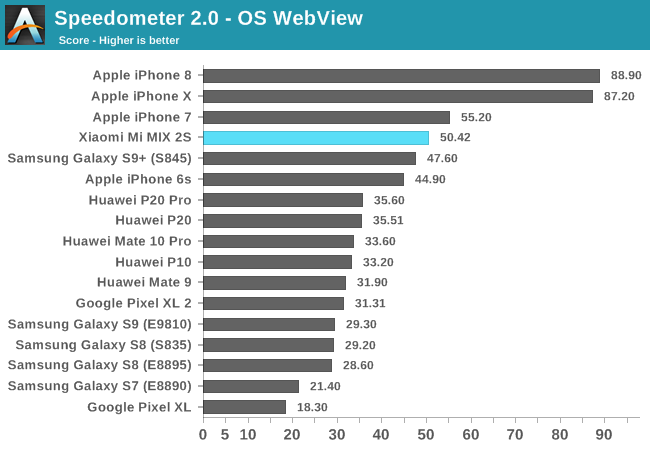 The web browsing tests show a similar improvement, pushing the further the scores that we’ve seen with the Galaxy S9+ and claiming the best Android performance among currently tested devices. 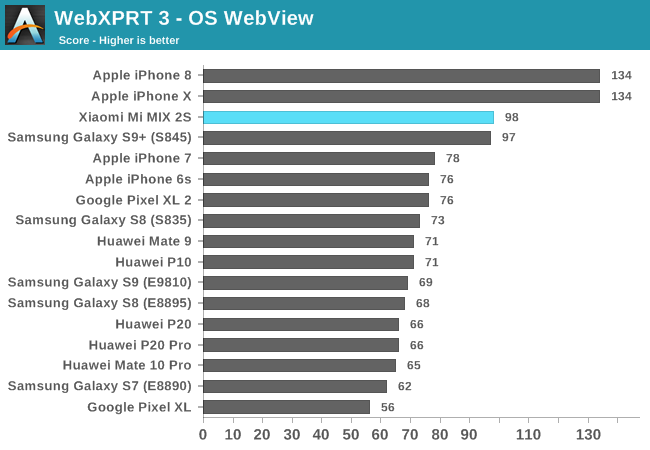 Applause to Qualcomm and Xiaomi

Over the last several months I had more opportunity to dive into the software of the Snapdragon 845 – in particular in the context of my efforts to try to improve the Exynos 9810 variant of the S9.  What Qualcomm has done in terms of rewriting the kernel scheduler is pretty astounding, as the modifications are quite extensive and heavy. I’ve talked to both ARM and Google about this and generally I think the two are underplaying or are unaware of the magnitude of the improvements.

I actually would not be surprised that if a majority of the performance improvements we’re seeing across the new Snapdragon 845 devices are in a great part due to software enhancements in the kernel rather than raw microarchitectural advancements. Performance latency is an incredibly important characteristic of system performance – and vendors need to pay a lot more attention to it, as in the grand scale of things, the cost of writing good software just seems minuscule compared to the vast investments needed to design and manufacture faster silicon chips and to brute-force the issue.

It’s very unusual for me to go into a rant like this praising a vendor – the Mi MIX 2S made such a good impression in terms of performance that I just have to laud Xiaomi and Qualcomm for the efforts made here, and I have to reiterate that the MIX 2S has been the fastest device I’ve used to date.

+ Submit News
JEDEC Publishes LPDDR5X Standard at up to 8533Mbps