Our first look at the X11SRA shows us it is a no-frills workstation board. With enthusiast motherboards, board partners are using a lot of shrouds, fancy heatsinks, and RGB LEDs to set apart their board from the others in that crowded space. With Workstation type boards, because these users are indifferent to the board's appearance and have other needs more important to them, we do not see any shrouds, fancy heatsinks, or RGB LEDs on the X11SRA. The board means business.

We can see at a high level the board has eight DRAM slots separated into groups of four which are vertically offset from each other. Being a C422 based workstation board for Xeon W, registered memory is required. Outside of that, we can see a total of three reinforced full-length GPU slots, six SATA ports, two M.2 slots, and two U.2 ports. The X11SRA is the base model of this lineup with the X11SRA-F and X11SRA-RF up the stack with additional abilities. 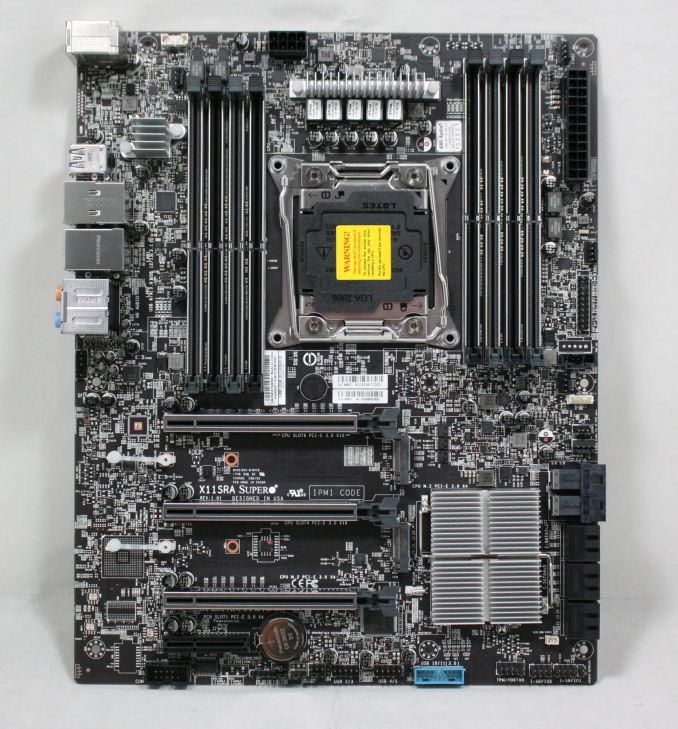 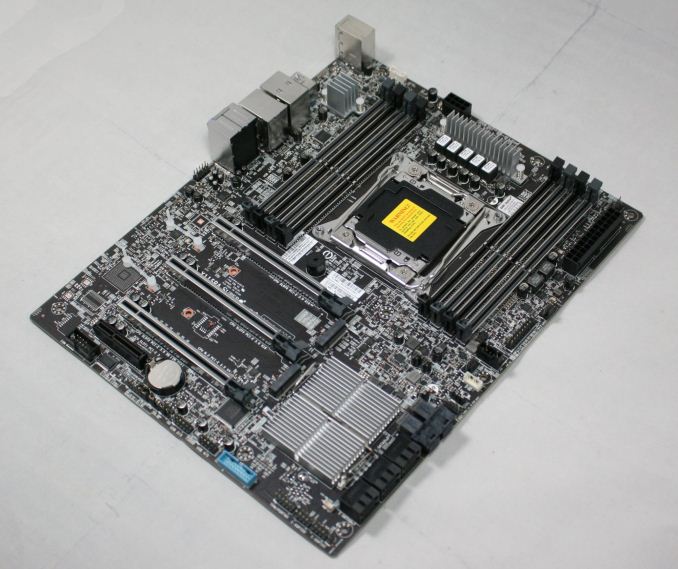 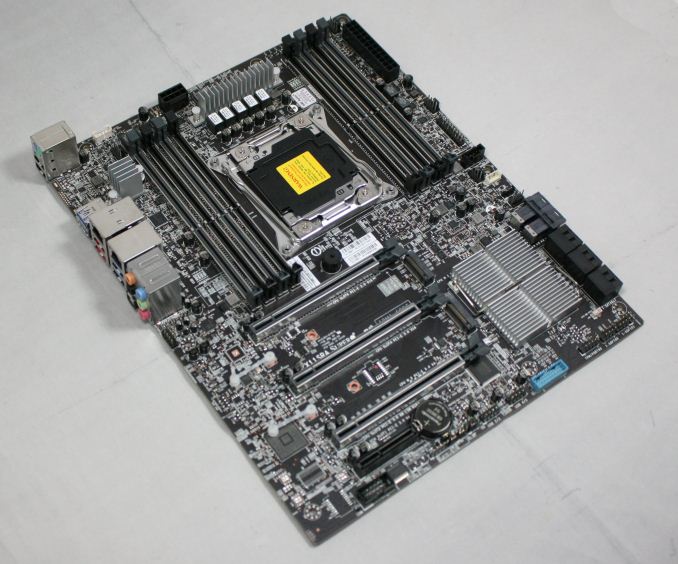 As far as fan control, the board has a total of five 4-pin headers that are PWM controlled. The Supermicro site or manual doesn't make a mention of the power output but does say "up to 5 fans" so I would imagine these are standard 1A/12W headers. Plenty for most fans on the market. 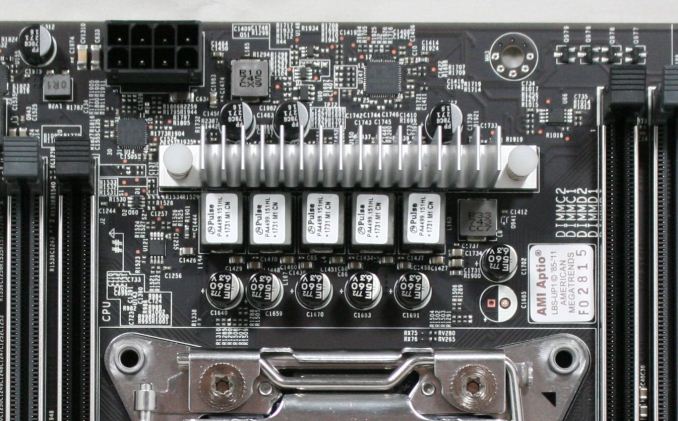 Power delivery on the X11SRA is handled by a 5-phase system. This is quite a bit different than what we have seen on the X299 platform and Skylake-X processors that tend to have more power phases, however Supermicro's common discussion point is how they use server-class power delivery on their consumer boards to remain robust. It also worth noting that Xeon W CPUs are locked from overclocking, and so C422 motherboard partners only need to design the board for the Intel specification and not much higher. The VRMs and its heatsink managed to handle the CPU without issue throughout the motherboard testing (about 2 hours) as well as CPU testing (well over 200 hours of testing total for the AnandTech database). 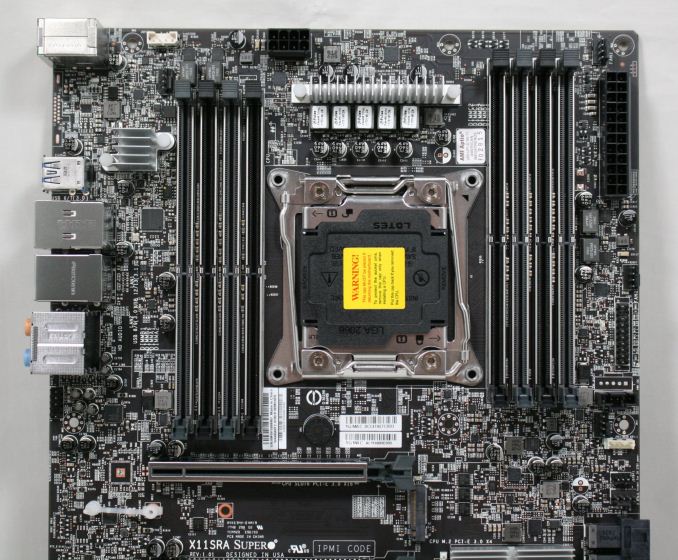 The top half of the board looks like most any other board without shrouds. We get to see all of the board exposed. On the top, we see the 8-pin EPS plug for power to the CPU as well as a couple of fan headers flanking the DRAM slots. The ATX 12V connector is moved up a bit on the board and is closer to the top right corner than the middle. We are able to see the power delivery bits cooled by a thin heatsink attached via push pins with another smaller square heatsink cooling the Aquantia 5 GbE controller.

The right side of the board should look familiar with mass storage connectivity still on the left-hand side of the image. In this case, the X11SRA has six SATA ports as well as two U.2 ports. Continuing on to the right is a fan, standby power, Intel VROC, and thunderbolt headers. Last we see front panel header, another fan header, and the 24-pin ATX connector.

Storage needs are covered by six SATA ports and the two U.2 ports pictured here as well as two M.2 slots which reside between the PCIe slots. Both the SATA and U.2 ports are connected through the chipset while both M.2 slots are fed x4 PCIe lanes directly from the CPU.

The bottom part of the board also holds several different headers. We see a COM port, multiple USB headers, CMOS clear, Audio enable, and VGA disable. On the far right side is a TPM header as well as a serial link general purpose I/O headers. 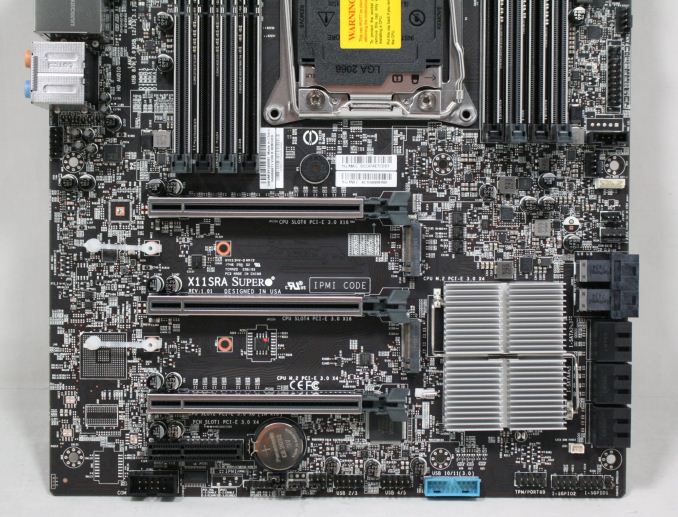 On the far left side of the board, we see some unused pads. These are populated by an Aspeed AST2500 management chip and some memory other the other boards in the family, the X11SRA-F AND X11SRA-RF.  The Realtek ALC1220 audio codec is located much higher on the board, by the audio stack. I was a bit surprised to see a high-end choice of audio codec on a workstation, but it does without the advanced filtering/caps and audio separation we are used to seeing on X299 based boards.

The back panel IO on the X11SRA consists of the following:

Depending on how the board was purchased, either bulk or retail will tell what accessories are included. The bulk package contains the base motherboard, two SATA cables, and the IO shield. The retail package includes those items as well as a quick reference guide and the retail packaging. Not a big difference. Essentially a guide and boxes. In our case, we received the bulk package.