Our first real glimpse of the board on the previous page shows the Gaming M7 ACK isn't a run of the mill budget board. For its price point, it certainly shouldn't be. The PCB is matte black with only a few distinguishing colors, with all heatsinks and shrouds a grey color. The back panel IO shroud extends down through the PCIe area and covers the audio bits in the process. The color is left to the RGBs: the back panel IO portion has RGB LEDs, along with five more between the PCIe slots on the bottom portion of the shroud. The power delivery heatsink sitting above the socket also includes integrated RGB LEDs.

What is easily noticable when looking at the board is the chipset heatsink, which is quite unique with its shape. The heatsink, along with cooling the chipset, doubles as an M.2 module cooler, with arms spreading out between the PCIe slots. While having M.2 cooling isn't unique by itself, the cooling is hinged with the chipset heatsink, allowing the cooler to pop up rather than be removed entirely. I have to say this is one of the more clean implementations of a robust M.2 cooler. 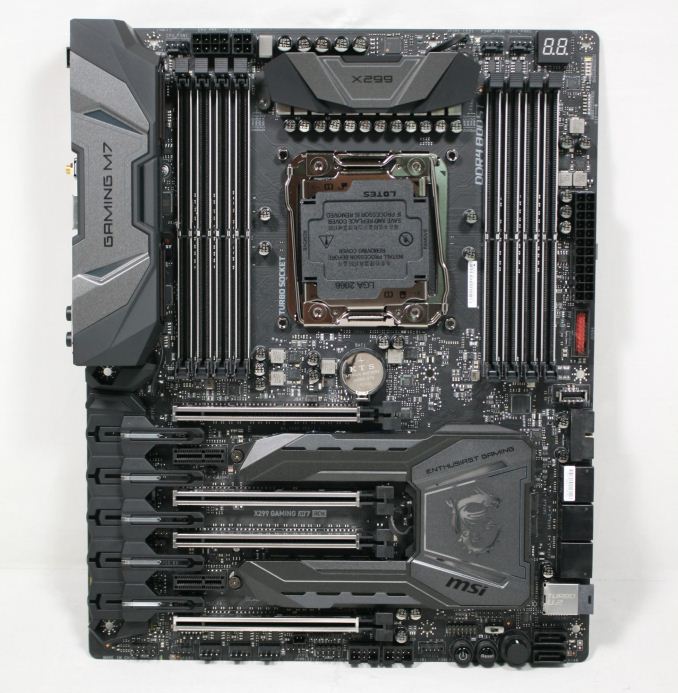 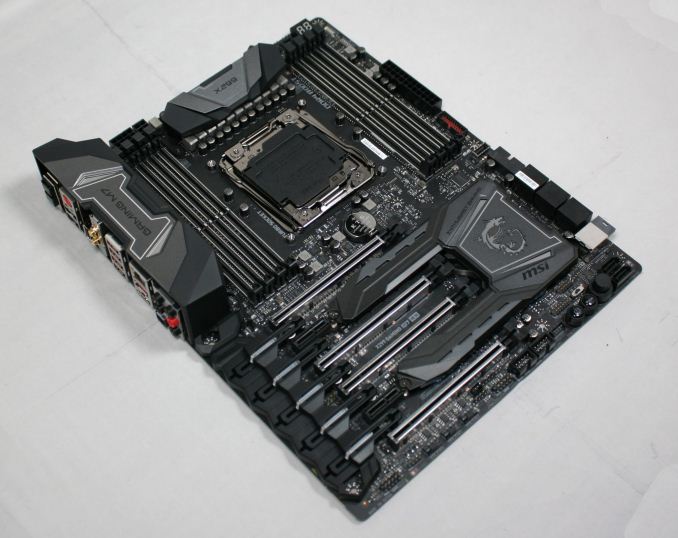 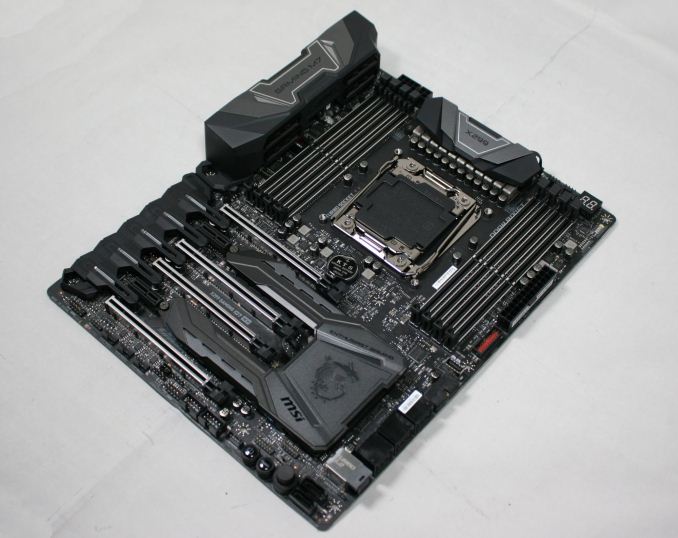 Diving into the specifics of the board, the MSI Gaming M7 ACK includes a total of six fan headers. On the top is where the CPU Fan 1, Pump Fan 1, and SYS Fan 1 reside, with the latter two located in the upper right-hand corner by the debug LED, and the CPU Fan on the left above the DRAM slots and to the left of the EPS power connectors. The remaining three headers, called SYS Fan 2/3/4, are located at the bottom of the board. All six headers have the ability to control the attached fans via PWM or DC. The CPU and Pump fans have an LED to indicate the fan control mode visually with red being PWM and green DC. MSI documentation does not mention if any of the headers are high amperage.

For the power delivery, MSI touts a 12-phase power delivery with 10-phases (a doubled 5-phase design) going to the CPU, and another phase for the VCCSA. Driving these are International Rectifier's IR3550 fully integrated power stages with an IR35201 multi-phase buck controller. The doubling duties are handled by five IR3599 doublers. The memory power delivery uses a Primarion PV4210 PWM with each memory phase using two 25A/40A NexFETs, in the CSD87350Q. Sending power to the VRMs is an 8-pin EPS and an (optional) 4-pin EPS connector. These premium power bits are the same that we found on the X299 Gaming Pro Carbon AC. 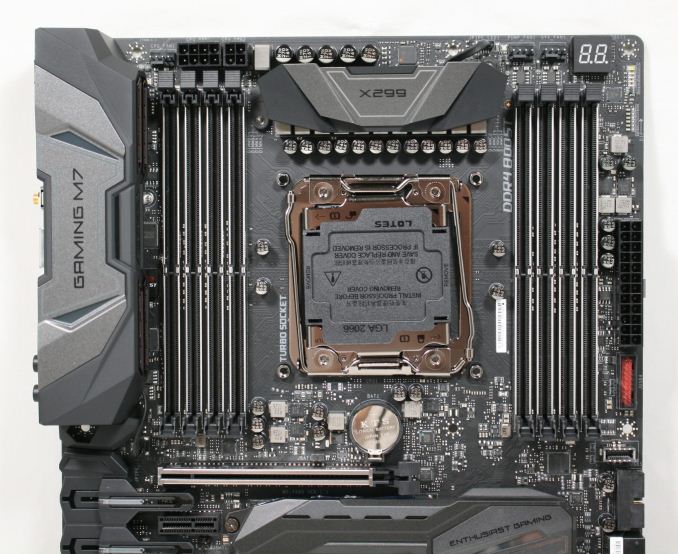 The board comes with eight slots for memory, which are all reinforced by MSI's Steel Armor. Keeping the memory locked in place is a single latch on the top of the DRAM slot. Compared to dual latch systems, the single latch is a bit easier when the system is installed, and still locks the sticks down securely, but might require a double check on the bottom latch to make sure the memory is in place. The board supports both Dual and Quad channel DDR4 with capacity up to 128GB. Memory speed for quad-channel processors is up to DDR4-4266, and DDR4-4500 with dual-channel processors.

The top-down image of the right side of the board shows, in the bottom corner, two of the eight SATA ports oriented vertically from the board. This follows with a U.2 connector, the six SATA ports, a front panel USB 3.1 header, and a pair of USB 3.0 headers.

To the right of the 24-pin ATX connector are EZ debug LEDs (4), for Boot, DRAM, VGA, and CPU, which give a visual display of where the board is at in POST. Located directly to the left of those are a miniature set of voltage read points covering Vcore, VCCIO, VCCSA, DDR, CPU (input voltage), and Ring voltage. These are quite helpful when extreme overclocking, rather than relying on software readouts.

Across the bottom of the motherboard, there are several IO headers and a couple of buttons. From left to right we see:

Hidden under the shroud on the left, connecting to the front panel audio, are two Realtek ALC1220 audio chips. Two is not a typo. MSI has one set up for front panel audio, and the other for audio output on the rear. It also uses Chemicon Gold Series audio capacitors for the front and rear outputs as well as separated audio layers for the left and right channels. 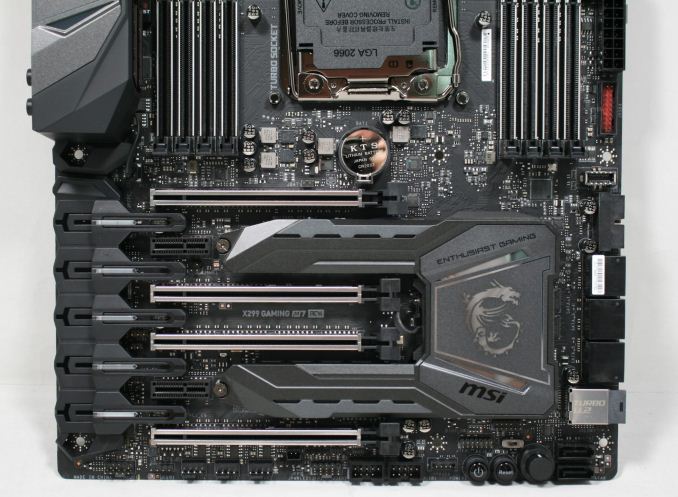 The bottom half of the board has a total of six PCIe slots with all four full-length slots reinforced. Between the full length slots are two x4 slots connected via the chipset. The primary video card slots are all CPU connected (lane breakdowns in the table below). The primary video card slot slots are, from top to bottom, slots one and four. This configuration allows for double and triple wide cards to fit. Any three-way SLI/Crossfire action will utilize slot 6 (bottom slot).

Below is a simplified list of  how the PCIe slots will work with each family of CPUs (talking PCIe lanes) when multiple cards are used (the "@" symbol is used to show slot preference for the configuration):

So what might seem odd here is that the PCIe 3 slot is listed as PCIe 3.0 x4 from the CPU in all configurations, despite being a full sized slot. This is due to the breakdown with the PCIe lanes for the U.2/M.2 slots.

The back panel IO has the following connectors: 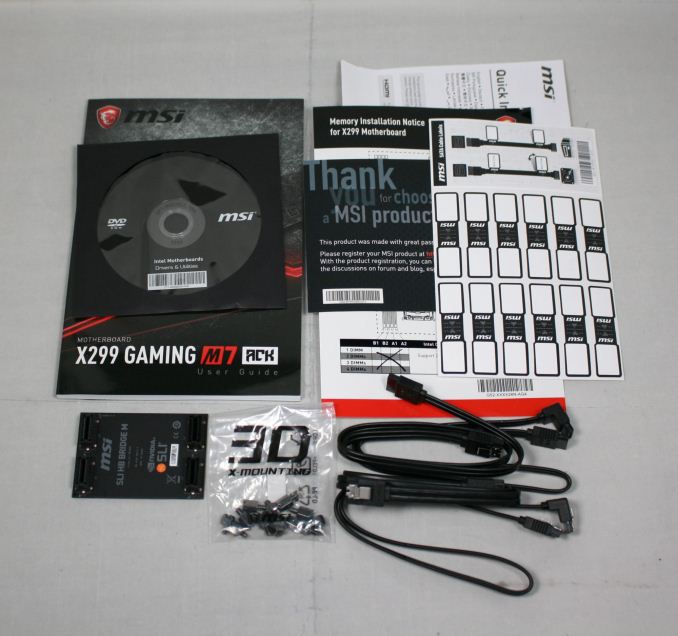