The ROG Strix X299-XE Gaming has a fairly simple look to it, with a black PCB, DRAM slots, and PCIe slots. For onboard styling, ASUS uses a pattern of lines going from the PCH heatsink through to the socket area on the PCB, with angled heatsinks with consistent angled grooving. It's clear that ASUS is using specific angles in its styling to match the look across the whole board.

A shroud covers the back panel IO and audio section, which is also where one of the two onboard RGB LEDs are located. The second is located in the middle of the board between the socket and first full-length PCIe slot. Additional RGB LEDs can be added through the board's two onboard headers. For the central heatsink, users are able to 3D print and customize what that area displays. The chipset heatsink is oddly shaped as it has a part sticking out which is designed to cool an M.2 device underneath. On the bottom of the board is where the two-digit debug display is, as well as a simple power button. 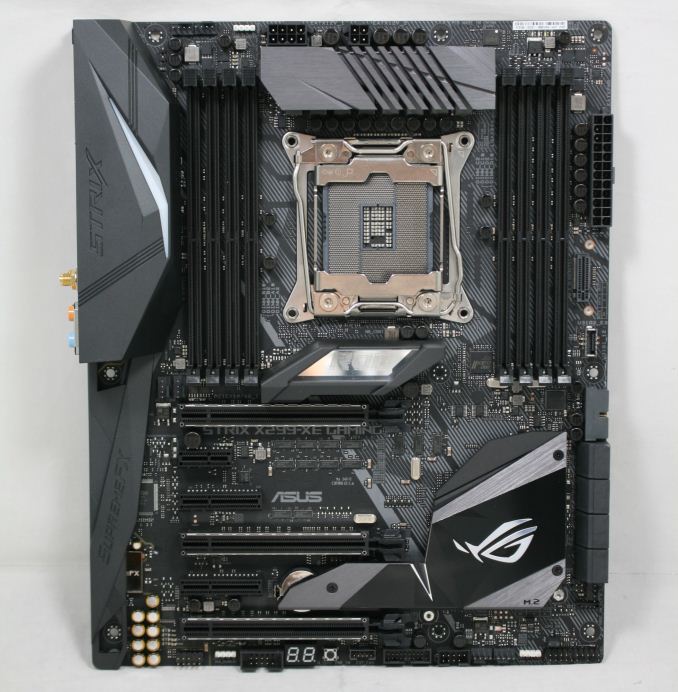 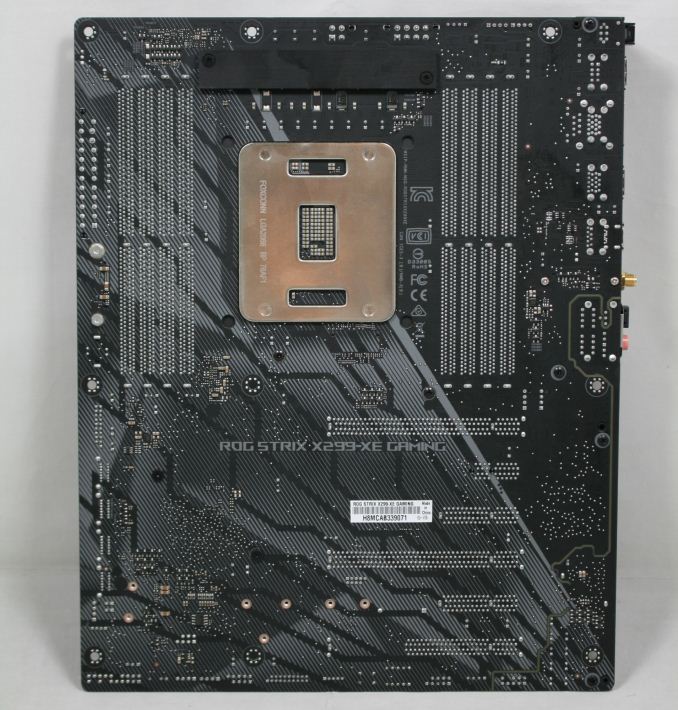 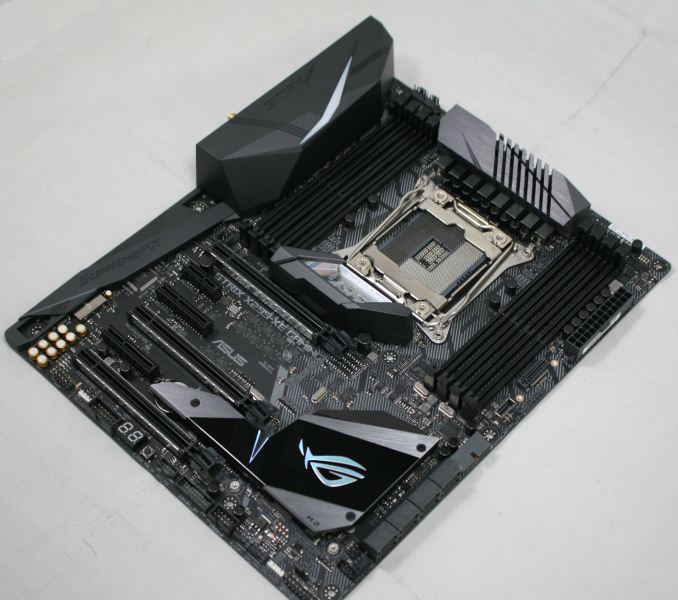 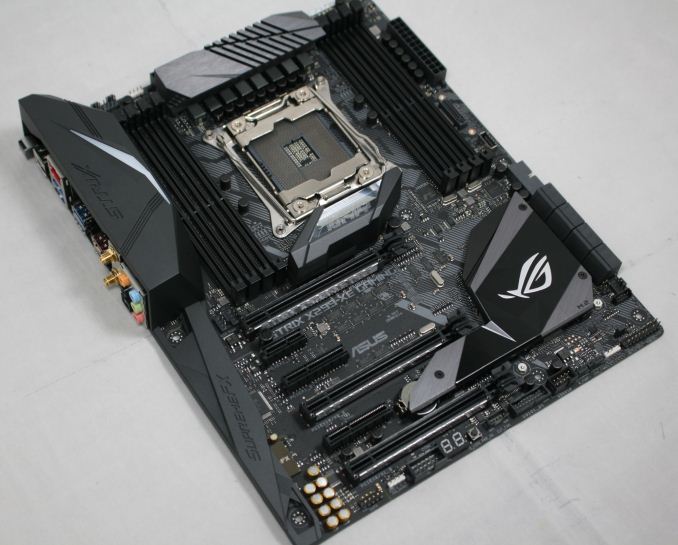 There are 7 fan headers on the board, with some also supporting high-power water-cooling pumps. The first two CPU fan headers are at the top of the board above the left DRAM slots. On the bottom, below the chipset heatsink, are two more (the W PUMP+ and CHA FAN2 headers). Another is just below the SATA ports and is for an M.2 FAN. The last two are nestled between the bottom of the left DRAM slots and above the first full-length PCIe slot, and are designated for the AIO PUMP and CHA FAN1 headers. All the onboard headers support auto-detection of PWM or DC controlled fans.

The ASUS ROG Strix X299-XE Gaming uses the same VRM as the non-XE version, only the heatsink is larger, includes a bracket, and a 40x40mm fan to mount on top for additional cooling. The power delivery is driven by ASUS' 8 Phase Digi+ VRM controller (Infineon IR35201) and controls seven 60A Infineon IR3555M MOSFETs along with one smaller Texas Instruments CSD97374Q4M NexFET. Getting power to the VRM is a required 8-pin EPS 12V connector as well as an optional 4-pin EPS 12V. 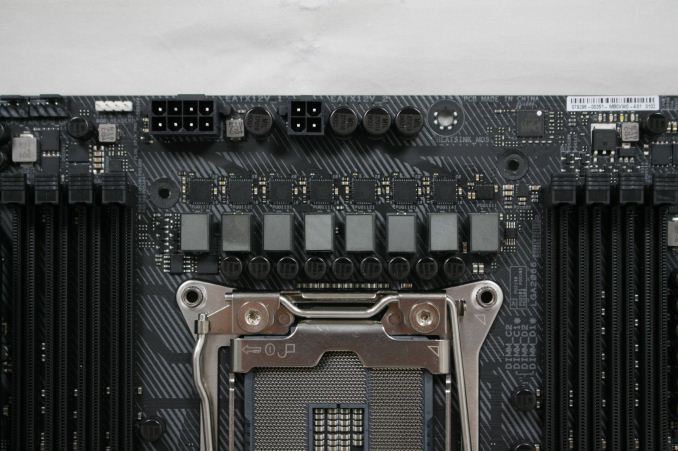 The DRAM slots on the ROG Strix X299-XE Gaming are not reinforced and use a one latch system to lock the sticks in place. Memory compatibility is up to DDR4-4133 for both Skylake-X (quad-channel) processors and Kaby Lake-X (dual-channel), with support up to 128 GB and 64 GB respectively. In the upper right-hand corner is the Q-LED display to show users where in the POST process they happen to be. These, along with the two-digit debug display on the bottom of the board are both useful tools for troubleshooting POST issues. 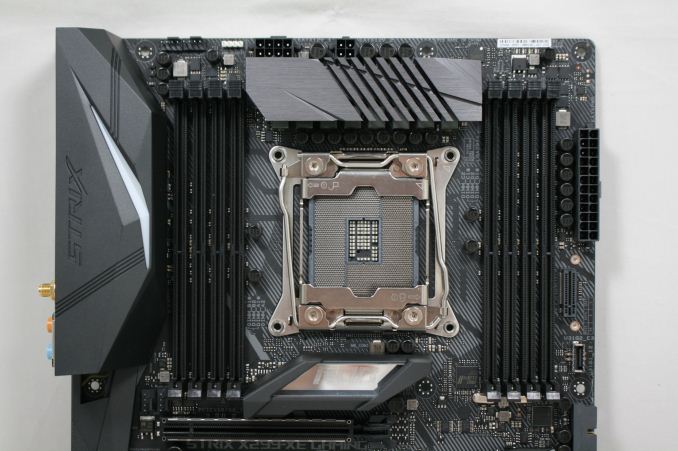 From top to bottom on the right-hand side of the board, the first item is the 24-pin ATX connector for board power. Next to it is the vertical M.2 slot, as well as the front panel USB 3.1 (10 Gbps) header. Next is a front panel USB3.0 header, the eight SATA ports, and a fan header.

All eight chipset connected SATA ports are located next to each other in the bottom right-hand corner.

For PCIe, the ROG Strix X299-XE Gaming comes equipped with six PCIe slots. The three full-length slots are connected to the CPU, as well as being steel reinforced, and are used primarily for video cards. The smaller slots are an x1 and two x4 slots (the first runs at 1x) powered by the chipset for add-in cards. 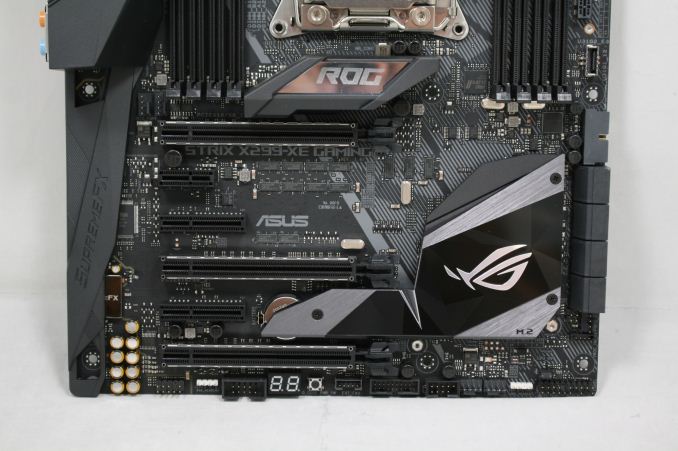 Surprisingly the third slot is listed as an x1 slot for any CPU below 44 lanes. Normally we would expect to see an x8/x8/x8 configuration for a 28-lane CPU in 3-way, however it seems that the layout this way makes more sense on this setup? We're not quite sure what the idea was here - the only viable explanation is that perhaps ASUS wants to make sure the first GPU is always at x16.

The back IO panel has a BIOS Flashback button, two USB 2.0 ports, the Intel NIC and four USB 3.0 headers. We also see USB 3.1 (10 Gbps) Type-A and Type-C ports in red next to the Intel Wi-Fi unit, and 5 jack audio stack with SPDIF out.

Our included accessories fell a bit short of what the website says is included, but this is due to it being a board sent from ASUS. Retail boards will come with everything listed below 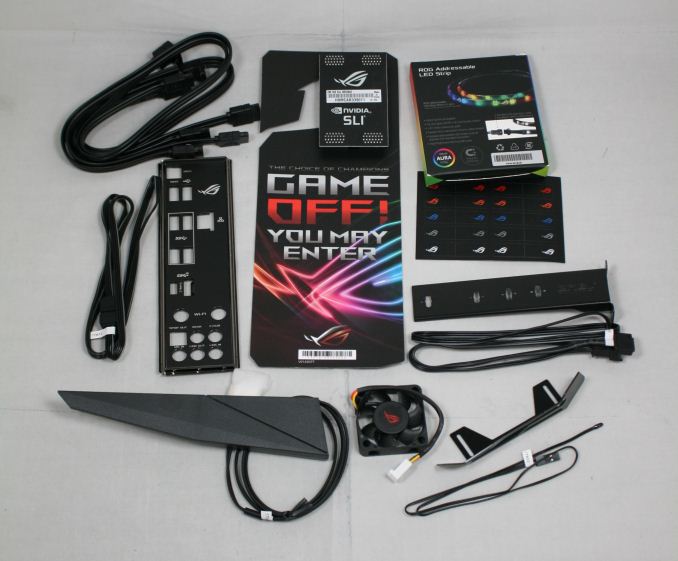 This is a substantial kit for a gaming product, with the optional fan at least being optional. The bundled LED strip is an interesting addition too, moreso than we get with other gaming boards.