The appearance of the latest TUF board from ASUS looks a lot different than its X99 based predecessor. The X299 dials back on the military-theme, with the armor covering a bit more of the Sabertooth. The armor around the back panel IO, PCIe area, and VRM shroud are mostly grey this generation, with black accent pieces covering the audio portion as well as covering the upper right-hand corner of the board. The back of the board also has armor for protection and rigidity purposes. The top part of the backplate is used to help cool the VRM it sits under with a thermal pad between the board and metal backplate. The DRAM slots alternate black and grey matching the shrouds and overall theme. The PCH and M.2 slot are actively cooled by a small fan underneath the PCIe shroud which routes the air over the PCH heatsink, down to the M.2 heatsink and out the bottom. RGB LEDs will have to come from the user using the single onboard header as the TUF X299 Mark 1 does not have any for looks. There are the Q-LED lights in the top right corner, and that is it. 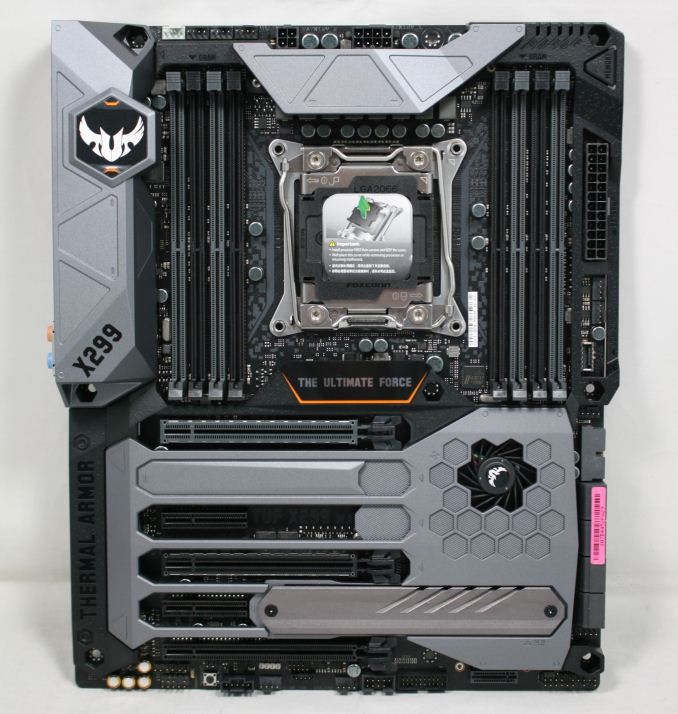 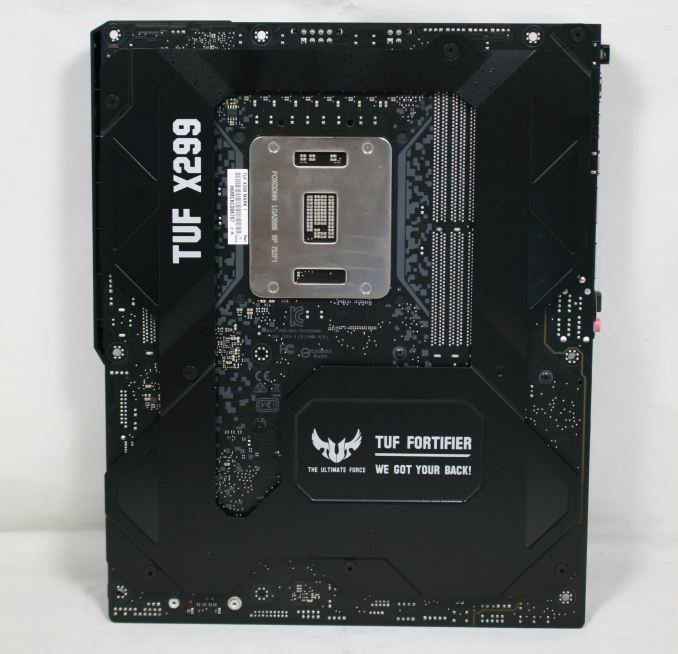 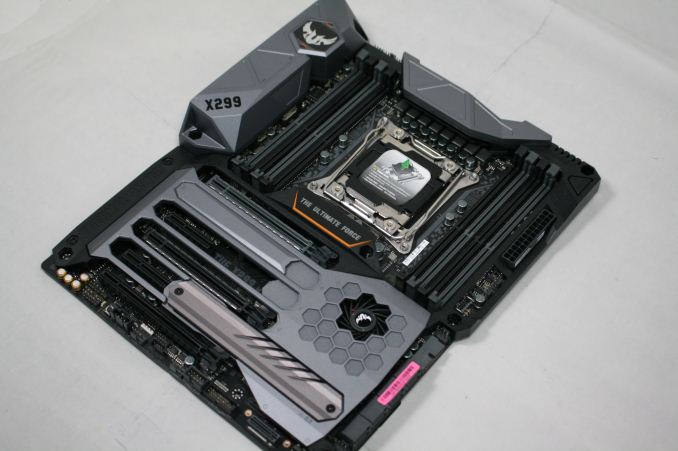 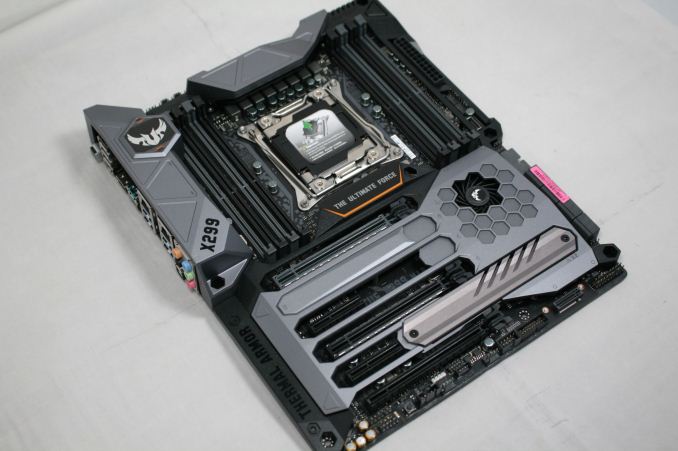 If there is one thing this board has a lot of that would be fan and pump headers. There are a total of 10, in fact. Up top above the left set of DRAM slots are four headers, CPU Fan, CPU OPT, CHA Fan3 and the ASST Fan header. Down the right side of the board are four more headers, CHA Fan 1/4/5 and the W PUMP+ header. On the bottom are the last two, CHA Fan 2, and H AMP Fan. All headers will support both 3-pin DC and 4-pin PWM devices for added flexibility in fan choice. Asus recommends the use of PWM fans on the H AMP Fan header on the bottom or to disable Q-Fan if using a 3-pin device.

The VRM section is 8-phase and controlled buy ASUS's own Digi+ VRM control chip (ASP1405I). Both the chokes and 10K Black Metallic Capacitors are certified military-grade for increased durability. The MOSFETs are Infineon OptiMOS 5 BSG0812ND and also considered military-grade. Power is fed to the VRM by an 8-pin EPS connector as well as an optional 4-pin next to it. In this picture, we also get a closeup of the four Fan headers in the top left-hand part of the picture.

The eight DRAM slots on the TUF X299 Mark 1 use a one latch system to keep the sticks in place. Surprisingly, the slots are not reinforced, although ASUS hasn't really focused on that 'feature' like other companies have. Certainly, that feature isn't needed but figured it would have been there since the board sits in the durable and reliable category. Memory capacity is 128GB with supported speeds up to DDR4-4133 for both quad channel (Skylake-X) and dual channel (KabyLake X) CPUs.

The right side of the board, starting from the top-right corner, is where the Q-LED lights are found. There are five lights in total. CPU, DRAM, VGA, and BOOT lights round out the active LEDs. These lights are useful during the POST process for troubleshooting as it gives users an idea of where to look for issues if the system isn't booting properly. Also located here is the MEMOK! button which will automatically tune the memory for compatibility and allow for a successful boot if memory is the culprit. The PWR LED lights up to indicate the system is ON, in sleep mode, or in soft-off mode. 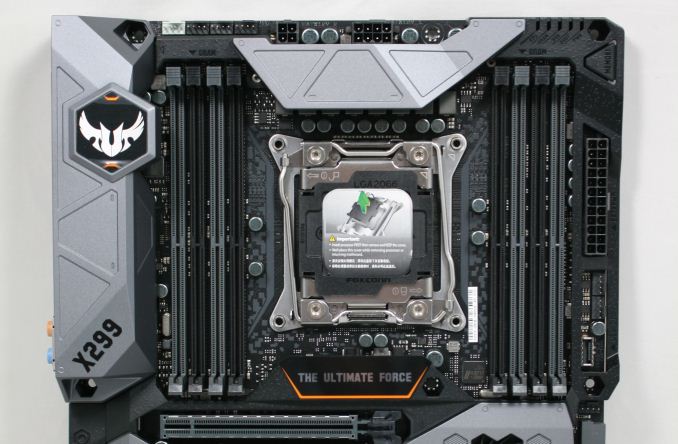 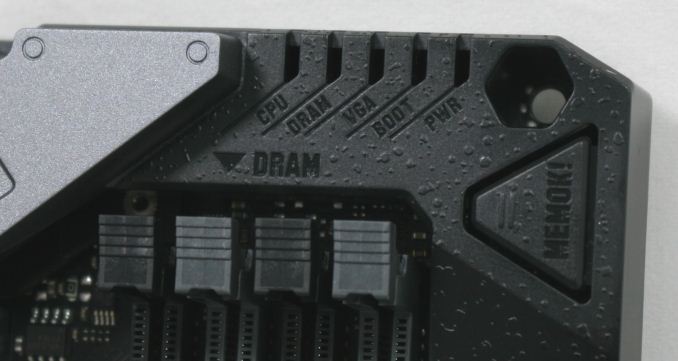 The eight chipset connected SATA ports are in a standard configuration with all ports next to each other and oriented horizontally. Ports 5, 6, 7, and 8 share bandwidth with the second (bottom) PCIe x4 slot.

The bottom of the board with the shroud off shows the ASUS specific ALC1220S codec and Nichicon capacitors. Just to the right of it are three temperature sensor headers (via thermistors) above the front panel audio header. As we keep moving to the right there is a power button, Thunderbolt header, RGB LED, Chassis Fans, USB 2.0 header, the vertical M.2 slot and front panel headers. 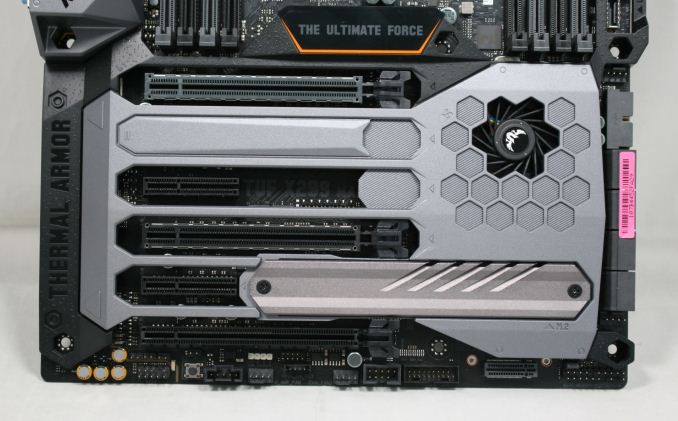 On the back IO panel we get a USB BIOS Flashback button and a stack of four USB 2.0 ports to start. This is followed by the TUF Detective USB port (for the BlueTooth unit for debugging), and USB 3.1 (10 Gbps) Type-A (Teal) and Type-C ports. Two network jacks on top of four (total) USB 3.0 ports and a 5-jack audio stack with SPDIF out round out the connectivity here.

We get the following (some not pictured): 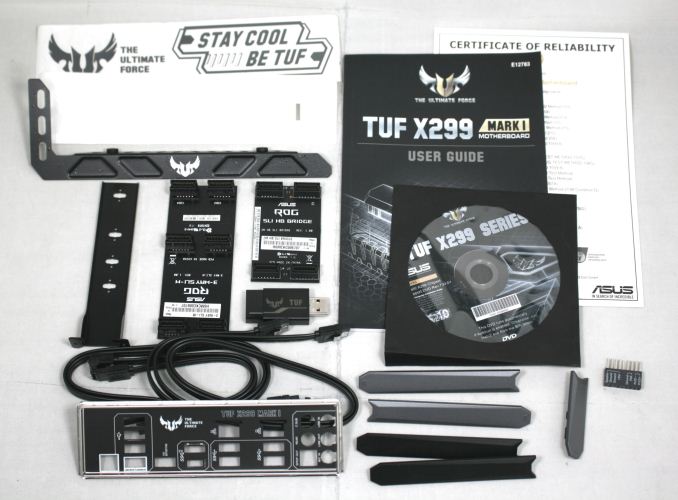