With only a few days to test out the console, and a selection of games which were ready before launch, there’s no way to do a full review of every game launching with the Xbox One X as an Xbox One X Enhanced title, but the list of titles already either in development, or available now as an Enhanced game is growing quickly. Check out the full list at Xbox.com to get the most up to date version.

So what does it mean when a game is titled as Xbox One X Enhanced? It means the developer has done work above and beyond the normal Xbox One title’s efforts to improve the experience for the Xbox One X. That doesn’t guarantee that the game will be rendered at 3840x2160 though. Despite the 4K target from Microsoft, the developer may want to put the extra GPU compute into more complex geometry and scenes. It may mean that the title is designed for a faster framerate. Maybe the Xbox One version launched at 30 fps, but the Enhanced version targets 60 fps, which may be the most important factor in a fast-paced shooter. There’s a lot of things that can be done with the extra power of the Xbox One X, other than pure resolution, but most games are going to target a higher resolution and HDR.

With only the chance to play a few titles, here are some initial thoughts on the Xbox One X gaming.

The extra 31% CPU power can easily be felt on the dashboard, where the Guide and navigation is finally as smooth as you’d expect. The latest Fall Update for Xbox helped out here as well, with overall better performance, especially in the Guide, but the original Xbox can still drop some frames here and there. The Xbox One X, even in the midst of gaming, pretty much always feels smooth.

In games, this can be noticed as well, with much more solid framerates on every title we tested. Certainly, there are going to be games where there’s a lot of on-screen action that can make the Xbox One X drop frames, but on the games tested, that wasn’t the case, at least while gaming. Forza 7 did suffer from some slowdowns, but only when new tracks were loading, and it doesn’t impact gameplay at all. 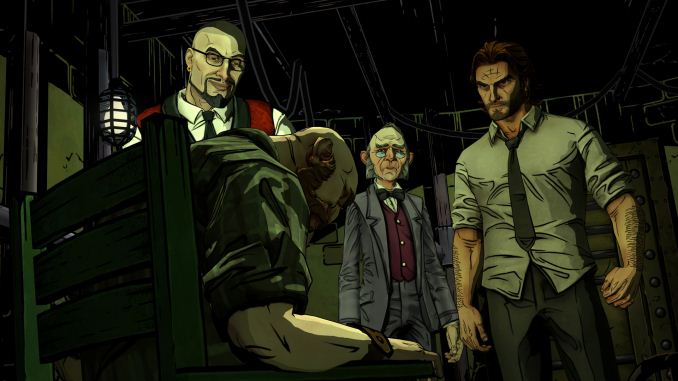 One game that really struggled on the Xbox One was The Wolf Among Us, from Telltale Games, and to see if the performance issues were solved, this game was loaded up on the Xbox One X. This game in particular still suffered from some framerate drops, although not as severely as on the original console, but it shows that just because there's more power, not every game is going to be perfect without some work by the developer to take advantage of it. It depends on what the bottlenecks were that were causing the performance degredation in the first place.

This likely won’t be a shock to most people, but the loading times in games can still be quite long. The new, faster SATA III hard drive does likely help somewhat, but the benefits are likely eaten up by the fact that the 4K assets are generally quite a bit larger as well.

It’s fair to say that the jump in image quality is not as dramatic as the early days of consoles, where new consoles would bring revolutionary updates to graphics, but the improvement from the Xbox One to the latest Xbox One X is very noticeable. If you’re lucky enough to own a 4K HDR television, gaming at higher resolutions means much better image clarity. HDR can have an even more dramatic effect to the overall scene, with deeper shadows, and richer colors.

Let’s take a look at some screenshots of Gears of War 4, which is one of the launch titles bearing the Enhanced logo. 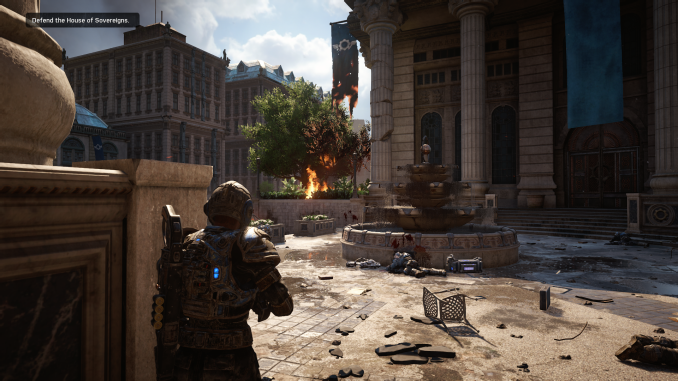 Gears of War 4 on Xbox One 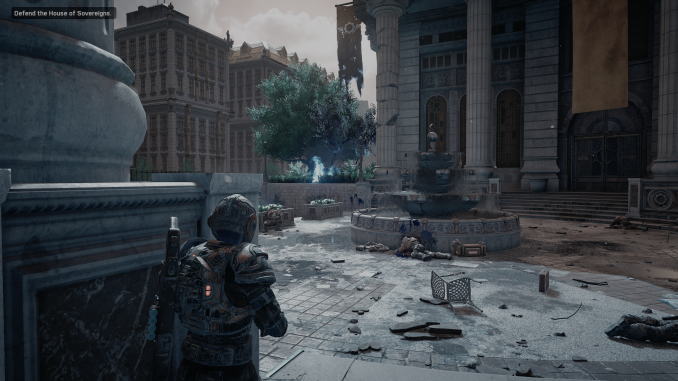 First, you’ll likely immediately notice that one of the images seems to have a dull tone to it. This is because original image was in HDR, and it was then converted into a PNG file for sharing by the Xbox, but PNG doesn’t work for HDR images, so it’s poorly tone-mapped down to SDR into an odd color. A software update would be helpful here to add some more options on screenshot outputs, much like they do for the video captures. If you do need access to the original JXR image file which supports HDR, you’ll have to capture your screenshots to an external USB 3 drive formatted to NTFS. We’ll come back to the color part later, but the poorly tone-mapped HDR image helps identify which image is which when we zoom in. 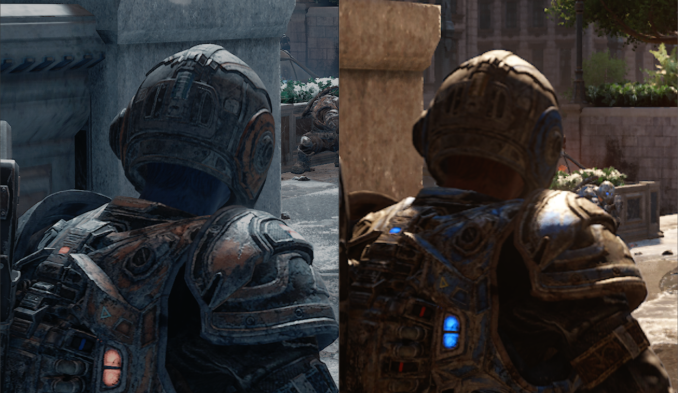 Xbox One X (left) vs Xbox One (right)

Zooming in on the image in a couple of places, and it becomes readily apparent just how much sharper the image is with the higher resolution textures. Once again, this isn’t a big surprise, since this is one of the reasons the console was given an additional 4GB of RAM, but the extra power does result in a much cleaner image. The body armor on the original console is a much fuzzier texture, to stay within the constraints of that console, but the 4K assets on the X really sharpen everything up. If you were able to view this in proper HDR, the effects would be even more dramatic, with deeper shadows, but shadows that are still able to provide detail. 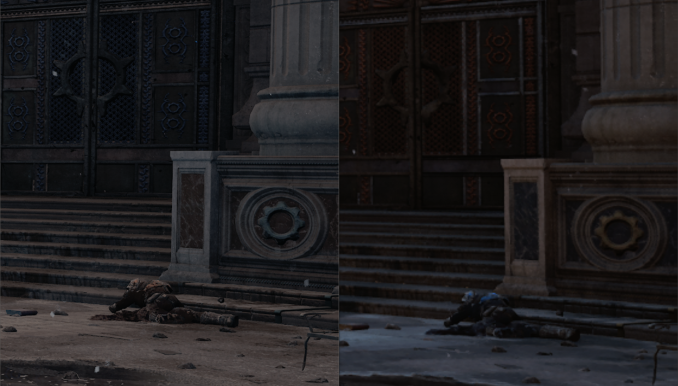 Xbox One X (left) vs Xbox One (right)

Here's another image from the same scene, but a part of the scene that is further away. The result is the same, with dramatically sharper images for the Xbox One X. This scene is in shadow as well, so HDR plays an even larger part in the effect on-screen. 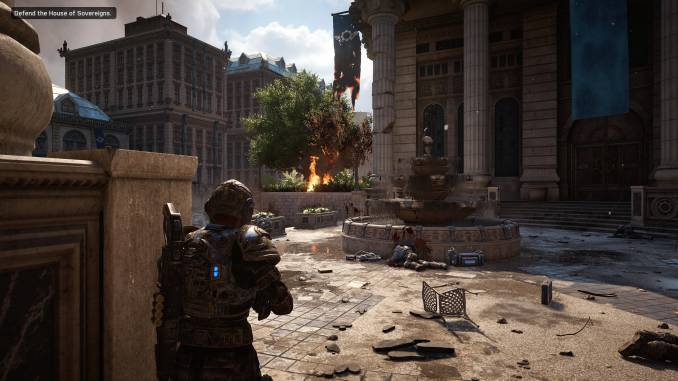 Having to disable HDR on the console in order to provide proper screenshots is a bit of a chore, and hopefully something that can be fixed in a future update.

Not everyone owns a flashy, new 4K HDR TV yet, so are there any benefits to using this console on 1080p TVs? Yes. The Xbox One X will still render the game at the targeted resolution for the Enhanced title, but then apply supersampling to the output and scale it down to the lower resolution of the connected TV. The increased quality of the textures will still be a big improvement over the original Xbox One, even if all of the detail is not able to be saved. Plus, the extra performance will help in almost any title to prevent any frame rate drops.

Well if you like older games, the Xbox team has some good news for you. Not only will all existing Xbox One titles work, but so will any of the compatible Xbox 360 backwards compatible games, and just recently, original Xbox titles are now available in backwards compatibility. Hypervisors are amazing things.