The In Win 303 Case Review: Minimalist ATX with Tempered Glass for $93

Professional testing requires the emulation of real-world situations but with repeatable results; thus, a perfectly controllable test setup and environment are required, especially for comparable results. Testing the thermal performance of any case with a typical real-world setup technically limits the comparability of the results to this setup alone, as an active system interacts with its environment and the change of a single component would alter myriads of variables. As such, we developed synthetic loads that emulate the thermal output of real systems, which however are passive, steady and quantifiable. As such, the thermal testing now displays the thermal capabilities of the case alone, as if it would have to deal with the entire thermal load by itself, regardless of the system that would be installed inside it. Laboratory data loggers are being used to monitor the PT100 sensors and control the safety relays, which are fully accessible via our custom software. Three such loads have been developed; the ATX version simulates a 200W CPU, 50W VRM, 30W RAM and 4 × 120W GPU card thermal load. Finally, three 3.5" HDD dummy loads have also been created, with each of them converting 30 W of electrical power to thermal, bringing the total thermal load of the ATX test setup up to 850 Watts. As such, the thermal load is immense and only the best of cases will be able to handle it for more than a few minutes, we are also performing a test with a thermal load of 400W, with all of the aforementioned components except the HDD drives at about 42% power, which is more suitable for the majority of cases.

Noise testing has been performed with a background noise level of 30.4dB(A). Advanced noise testing is also being performed, in order to assess the ability of the case to dampen the noise of the components installed inside it. This includes the installation of two noise-generating sources (strong fans) inside the case, one positioned approximately over the first expansion slot and one over the CPU area, which generate ≈ 44.2 dB(A) when unobstructed. During the advanced noise test, all stock cooling options of the case are entirely disabled.

Do note that the In Win 303 can support only two 3.5” devices, so the total actual thermal load in every test is reduced by 30W. 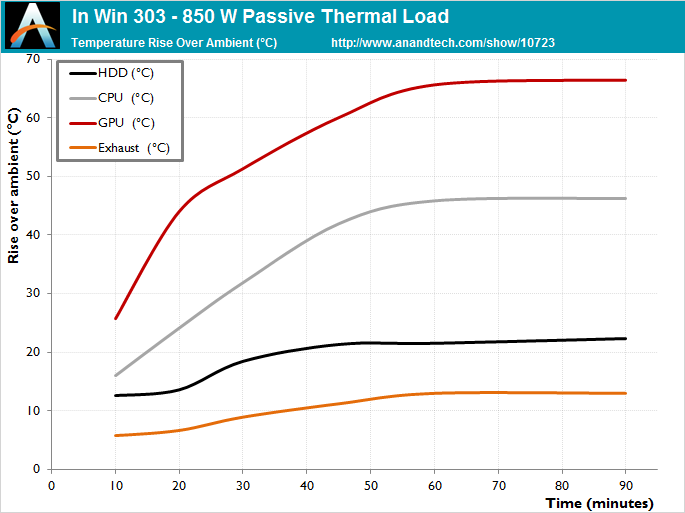 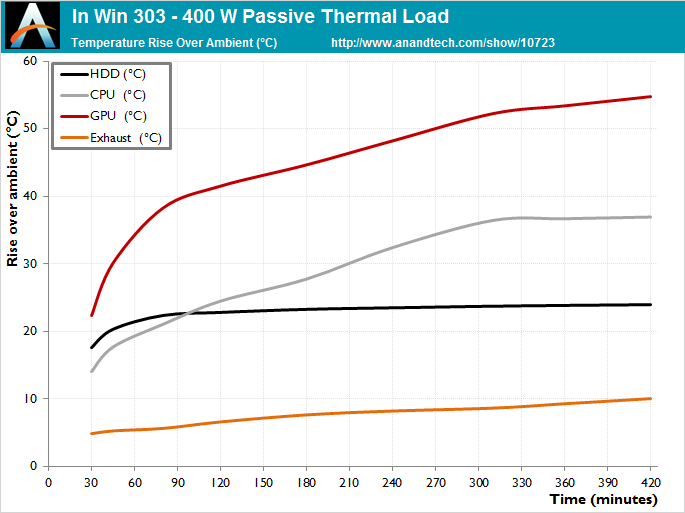 A quick look at our thermal performance results would suggest that the performance of the In Win 303 is very poor comparably to other similar cases. Even though this is the case when looking at the raw performance numbers, we need to consider that the In Win 303 does not have a single stock fan installed. Without even one stock fan to be found, we actually expected our testing to fail entirely, with the testing equipment reaching temperatures that would force the failsafe to kick in. That the In Win 303 managed to even complete our thermal testing was a pleasant surprise, hinting that it should maintain reasonable temperatures with a low to medium power PC installed, even without any additional cooling fans. For gaming PCs and advanced systems however, the In Win 303 could certainly use a couple of good fans. We should also add that the temperature of the 3.5” drives was relatively high. Their placement suggests that they will always be receiving minimal cooling, so it is clear that these slots are meant for efficient mainstream storage HDDs. High performance models could easily reach uncomfortably high operating temperatures under heavy load. 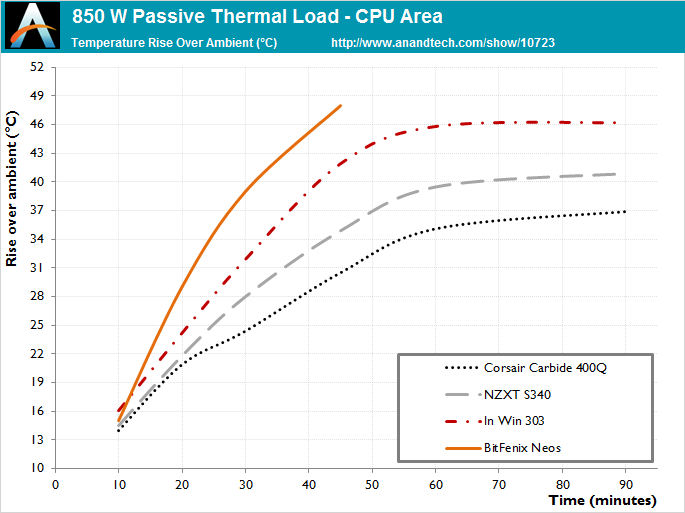 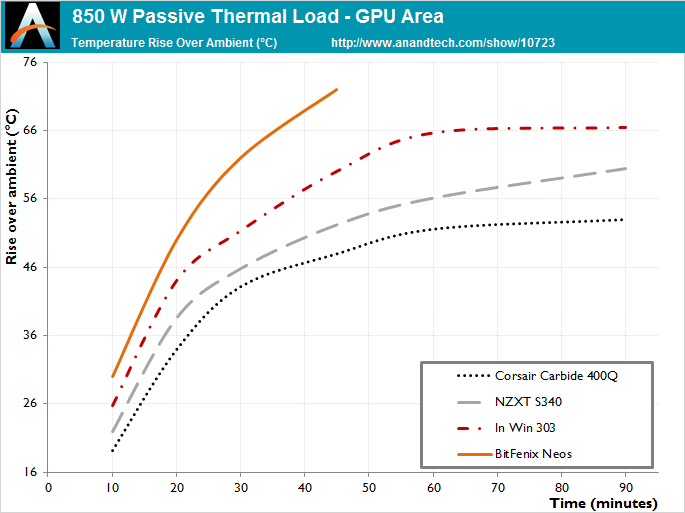 As the In Win 303 has no stock cooling or any other moving parts, it understandably does not make any noise at all by itself. The noise of the system will solely depend on the parts and fans that will be installed by the user. Our advanced noise testing revealed that the In Win 303 has very good noise dampening capabilities, dampening the noise of the installed testing equipment significantly. Our instrumentation measured a drop of 4 dB(A) during our advanced testing, a substantial figure for a case without additional sound dampening material installed on its panels. 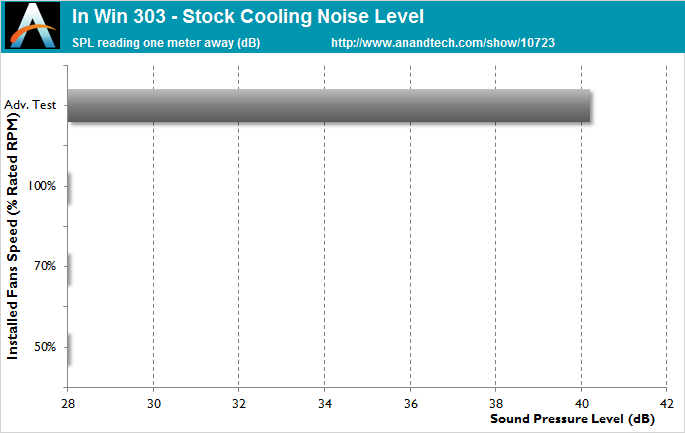