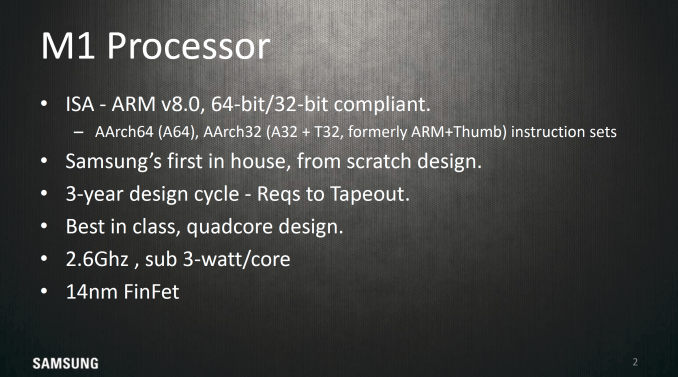 While we can always do black-box testing to try and get a handle for what a CPU core looks like, there’s really only so much you can do given limited time and resources. In order to better understand what an architecture really looks like a vendor disclosure is often going to be as good as it gets for publicly available information. The Exynos M1 CPU architecture is Samsung’s first step into a custom CPU architecture for an mobile SoC. Custom CPU architectures are hardly a trivial undertaking, so it’s unlikely that a company would make the investment solely for a marketing bullet point. 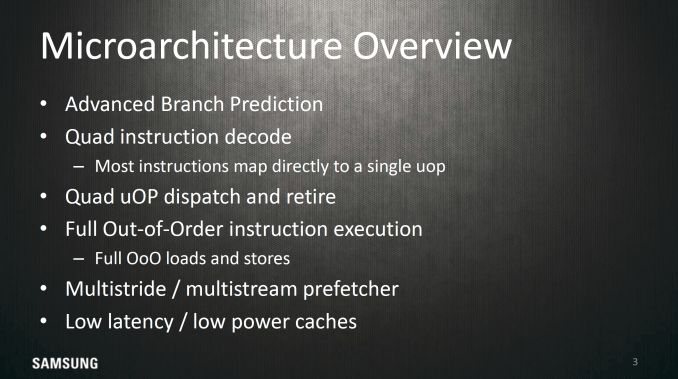 With that said, Samsung has provided some background for the Exynos M1, claiming that the design process started about 3 years ago in 2013 around the time of the launch of the Galaxy S4. Given the issues that we saw with Cortex A15 in the Exynos 5410, it's not entirely unsurprising that this could have been the catalyst for a custom CPU design. However, this is just idle speculation and I don't claim to have any knowledge of what actually led to Exynos M1.

At a high level, Samsung pointed out that the Exynos M1 is differentiated from other ARM CPU designs by advanced branch prediction, roughly four instructions decoded per cycle, as well as the ability to dispatch and retire four instructions per cycle. As the big core in the Exynos 8890, it obviously is an out of order design, and there are some additional claims of multistride/stream prefetching and improved cache design. 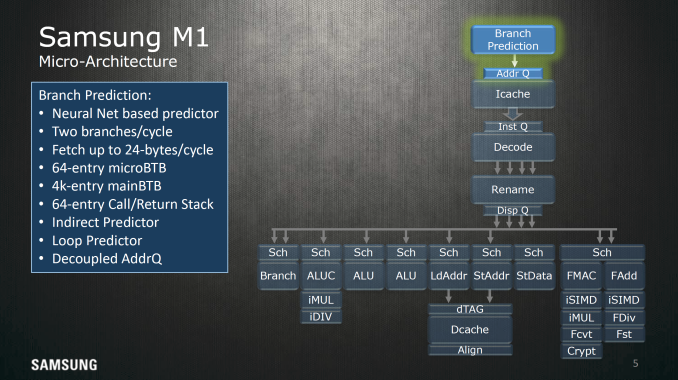 Starting with branch prediction, the major highlight point here is that the branch predictor uses a perceptron of sorts to reduce the rate at which branches miss. If you understand how pipelining works, it takes a significant amount of time to reload saved state and invalidate the execution that occurred after an incorrect branch. I’m no expert here but it looks like this branch predictor also has the ability to do multiple branch predictions at the same time, either as a sort of multi-level branch predictor or handling multiple successive branches. Perceptron branch prediction isn't exactly new in academia or in real-world CPUs, but it's interesting to see that this is specifically called out when most companies are reluctant to disclose such matters. 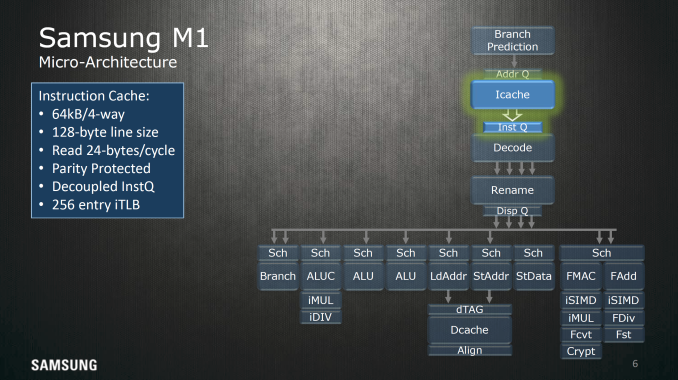 Moving past branch prediction we can see some elements of how the cache is set up for the L1 I$, namely 64 KB split into four sets with 128-byte line sizes for 128 cache lines per set, with a 256 entry TLB dedicated to faster virtual address translation for instructions. The cache can read out 24 bytes per cycle or 6 instructions if the program isn’t using Thumb instruction encoding. 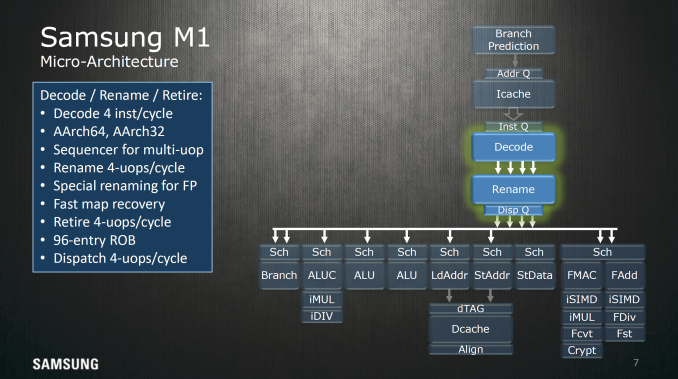 Other areas of interest include the disclosure of a 96 entry reorder buffer, which defines how many instructions can be in-flight at any given time. Generally speaking more entries is better for extracting ILP here, but it’s important to understand that there are some significant levels of diminishing returns in going deeper, so doubling the reorder buffer doesn’t really mean that you’re going to get double the performance or anything like that. With that said, Cyclone’s reorder buffer size is 192 entries and the Cortex A72 has 128 entries, so the size of this buffer is not really anything special and is likely a bit smaller in order to cut down on power consumption. 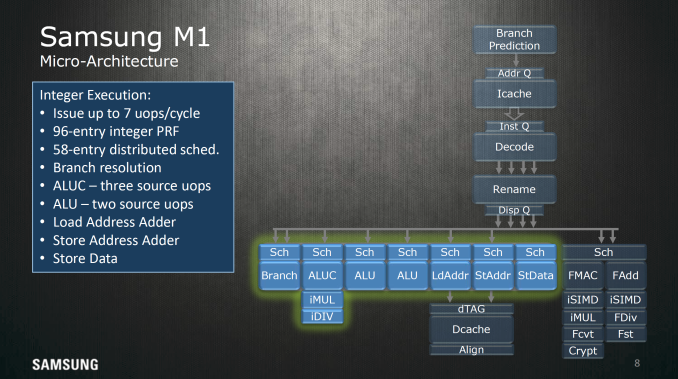 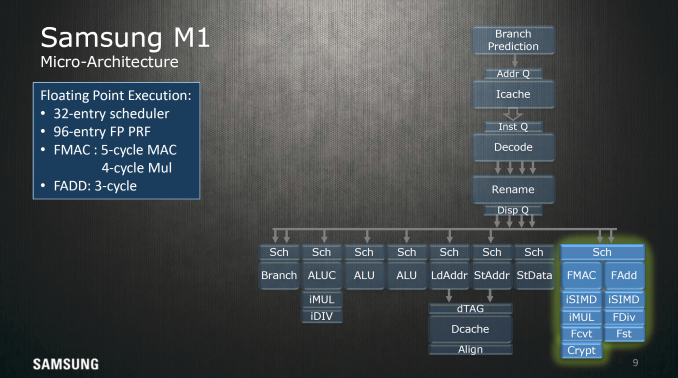 For loads and stores, a 32 KB, 8-way set associative cache with 64 byte line size is used as well as a 32 entry dTLB and 1024 entry L2 dTLB to hold address translations and the associated data for any given address, and allows out of order loads and stores to reduce visible memory latency. Up to 8 outstanding cache misses for loads can be held at any given time, which reduces the likelihood of stalling, and there are additional optimizations for prefetching as well as optimizations for other types of memory traffic. 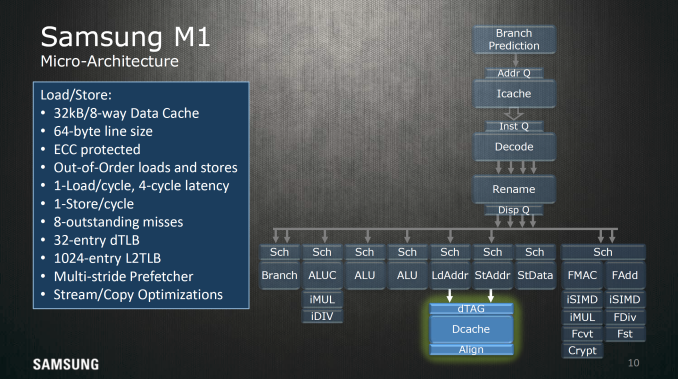 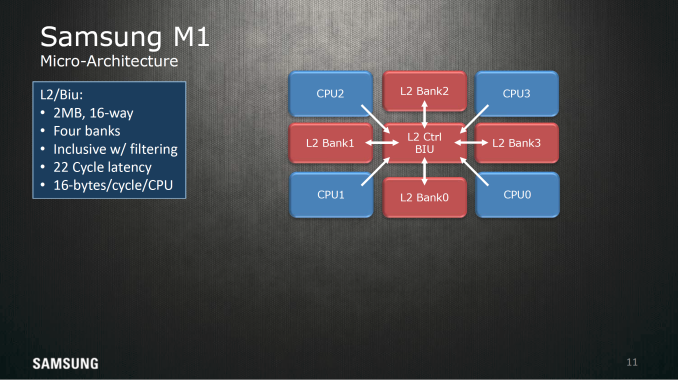 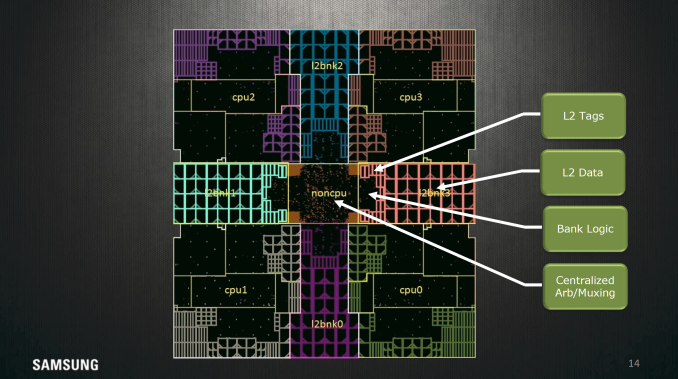 The L2 cache here is 2MB shared across all cores split into 16 sets. This memory is also split into 4 banks and has a 22 cycle latency and has enough throughput to fill two AArch64 registers every cycle, and if you look at the actual floorplan this diagram is fairly indicative of how it actually looks on the die. 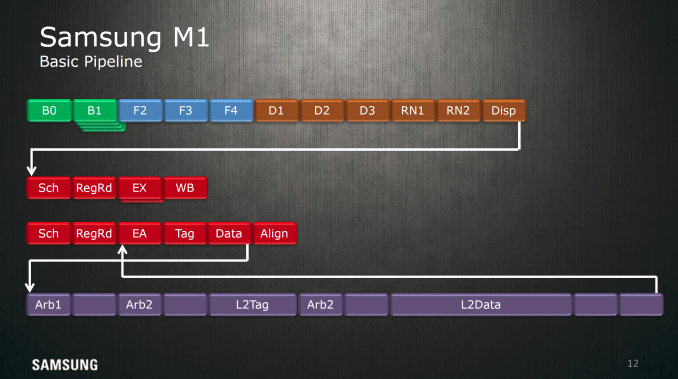 Samsung also highlighted the pipeline of the Exynos M1 CPU at a high level. If you're familiar with how CPUs work you'll be able to see how the basic stages of instruction fetch, decode, execution, memory read/write, and writeback are all present here. Of course, due to the out of order nature of this CPU there are also register rename, dispatch, and scheduling stages. 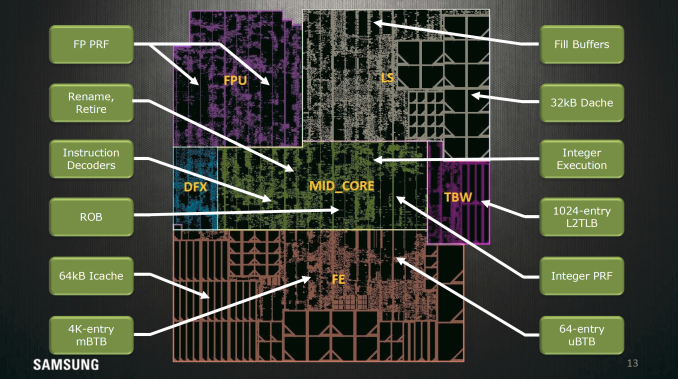 It's fairly rare to see this kind of in-depth floorplanning shots from the designers themselves, so this slide alone is interesting to see. I don't have a ton to comment on here but it's interesting to see the distances of all the components of the CPU from the center of the core where most of the execution is happening. 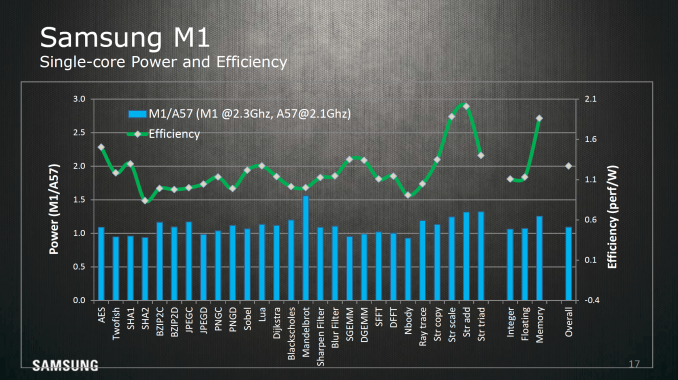 Overall, for Systems LSI's first mobile CPU architecture it's impressive just how quickly they turned out a solid design in three years from inception to execution. It'll be interesting to see what they do next once this design division really starts to hit its stride. CPU architectures are pipelined to some extent, so even if it takes three years to design one, if the mobile space as a whole is anything to go by then it's likely that we'll be seeing new implementations and designs from this group in the next year or two. Given the improvements we've seen from the Exynos 5420 to 7420 it isn't entirely out of question that we could see much more aggressive execution here in the near future, but without a crystal ball it's hard to say until it happens.