We have already talked about the Thunderbolt software and how it provides more security compared to connecting traditional USB peripherals. Detailed coverage of the Intel SSD Toolbox is also beyond the scope of this review. However, there are a couple of aspects - performance consistency and power consumption - that bear relevance in the day-to-day usage of the Thunder3 PCIe SSD.

Our performance consistency test takes the robocopy benchmark described in the previous section and instruments it to record the drive temperature as well as instantaneous transfer rates during the process. 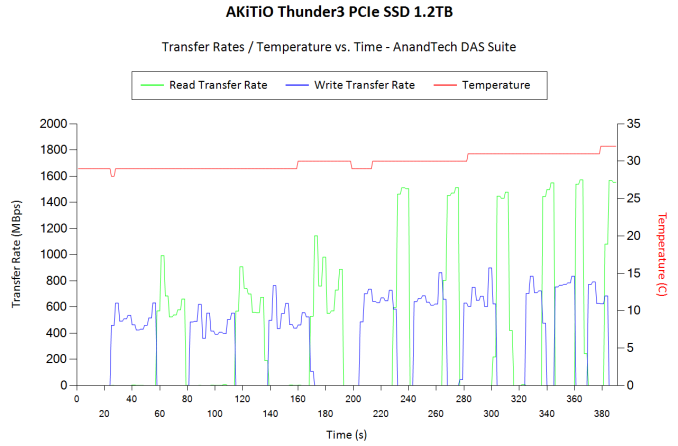 The active thermal solution helps a lot, with the SSD barely going above 33C in the course of transferring more than 250GB of data continuously. There is absolutely no thermal throttling at play in the Thunder3 PCIe SSD, and we don't expect any workload to be really able to stress the fan-based cooling mechanism much.

The power consumption of the Thunder3 PCIe SSD was recorded at the wall while processing the CrystalDiskMark benchmark, as well as over the course of processing our DAS test suite (including PCMark 8 storage bench). 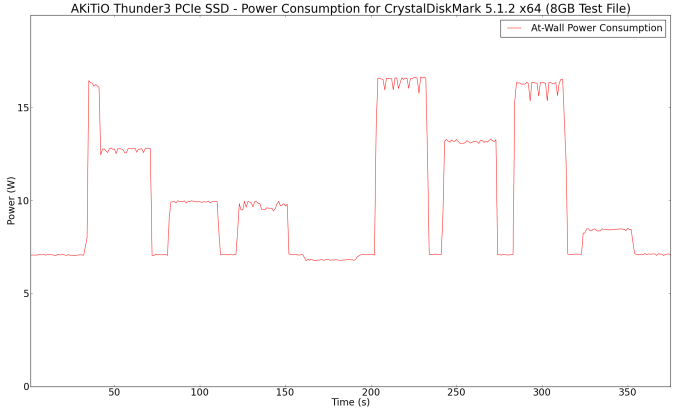 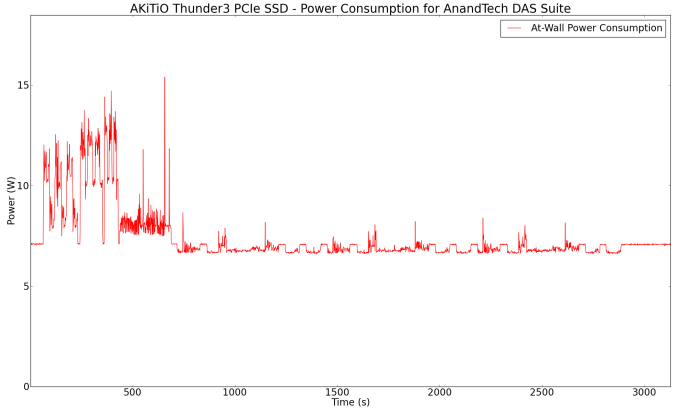 The above graphs show that the PCIe SSD itself can consume upwards of 16W for certain workloads. The unit idles at around 7W. Utilizing the DisplayPort output and/or adding another device in a daisy-chain configuration is also bound to drive up these numbers (particularly if the added device is bus-powered).

The strength of the Intel SSD 750 lies in performance consistency with random I/O intensive workloads. This is not something evident in the typical DAS workload. That said, the SSD 750 has the highest possible capacity of any consumer drive model that uses a PCIe 3.0 x4 NVMe interface. Considering the target market, it makes sense that AKiTiO uses the highest capacity model in the only version of the Thunder3 PCIe SSD. On the other hand, a bus-powered enclosure using a M.2 SSD with a better guaranteed endurance rating (in terms of drive writes per day (DWPD)) would be nice, though such a product would probably target a different use-case. 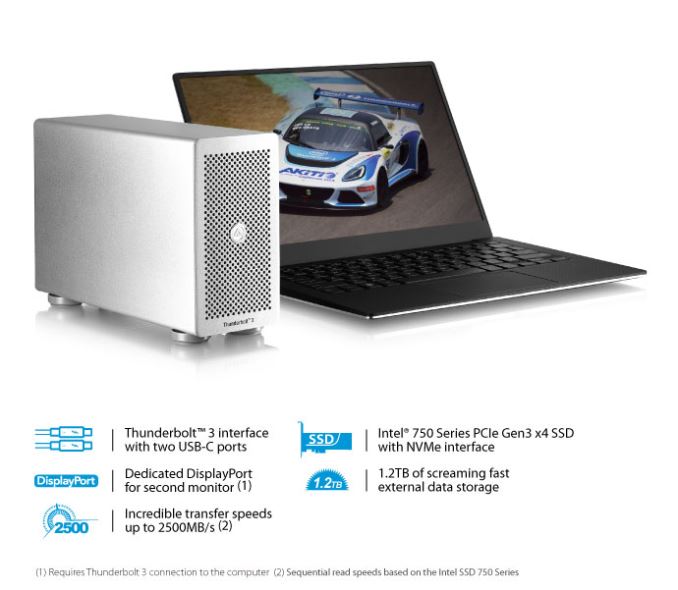 Coming to the business end of the review, it can definitely be said that the Thunder3 PCIe SSD is a unique product - It is the only product we are aware of that can put the Intel SSD 750 to use in a direct-attach scenario. The key here is that the storage is not tied to a single computer, and a portability option is available. Such fast and massive storage is a boon for multimedia editors working as a team, or, across multiple locations.

The pricing aspect is a bit shocking at first - $1300 for 1.2TB is more than $1/GB (the last Thunderbolt SSD that we evaluated - the LaCie Rugged Thunderbolt - was priced at $1/GB, but limited to SATA speeds). However, one must note that the Intel SSD 750 1.2TB add-in card itself still retails between $1018 and $1150. The Thunderbolt 3 enclosure with daisy-chaining capabilities and a dedicated DisplayPort output adds comparatively little to the final cost of the Thunder3 PCIe SSD. Considered standalone, the Thunder3 PCIe SSD is an technically exciting product that will also draw the attention of professional users. We would like to see AKiTiO add a bus-powered PCIe SSD to round out their Thunderbolt 3 Series.