In order to get an idea of how link aggregation really helps, we first set up the NAS with just a single active network link. The first set of tests downloads the Blu-ray folder from the NAS starting with the PC connected to port 3, followed by simultaneous download of two different copies of the content from the NAS to the PCs connected to ports 3 and 4. The same concept is extended to three simultaneous downloads via ports 3, 4 and 5. A similar set of tests is run to evaluate the uplink part (i.e, data moves from the PCs to the NAS). The final set of tests involve simultaneous upload and download activities from the different PCs in the setup.

The upload and download speeds of the wired NICs on the PCs were monitored and graphed. This gives an idea of the maximum possible throughput from the NAS's viewpoint and also enables us to check if link aggregation works as intended. 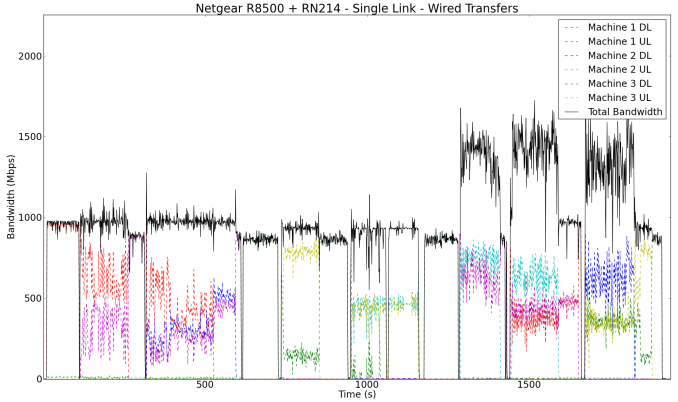 The above graph shows that the download and upload links are limited to under 1 Gbps (taking into account the transfer inefficiencies introduced by various small files in the folder). However, the full duplex 1 Gbps nature of the NAS network link enables greater than 1 Gbps throughput when handling simultaneous uploads and downloads.

In our second wired experiment, we teamed the ports on the NAS with the default options (other than explicitly changing the teaming type to 802.3ad LACP). This left the hash type at Layer 2. Running our transfer experiments showed that there was no improvement over the single link results from the previous test. 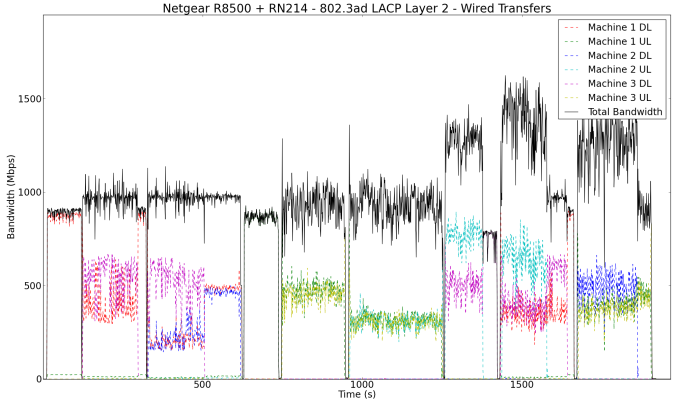 In our test setup / configuration, Layer 2 as the transmit hash policy turned out to be ineffective. Readers interested in understanding more about the transmit hash policies which determine the distribution of traffic across the different physical ports in a team should peruse the Linux kernel documentation here (search for the description of the parameter 'xmit_hash_policy').

After altering the hash policy to Layer 2 + 3 in the ReadyNAS UI, the effectiveness of link aggregation became evident. 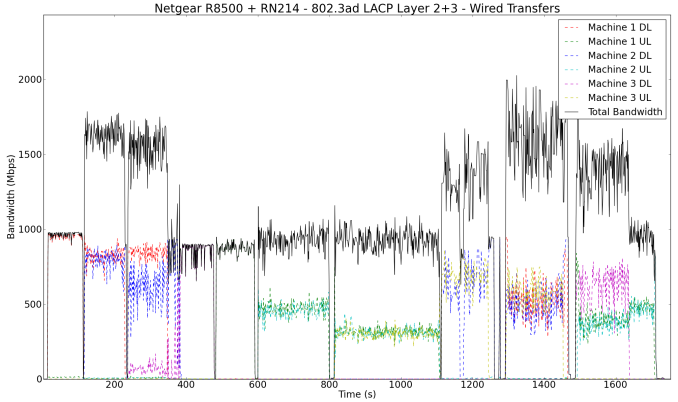 In the pure download case with two PCs, we can see each of the PCs getting around 800 Mbps (implying that the NAS was sending out data on both the physical NICs in the team). An interesting aspect to note in the pure download case with three PCs is that Machine 1 (connected to port 3) manages the same 800 Mbps as in the previous case, but the download rates on Machines 2 and 3 (connected to ports 4 and 5) add up to a similar amount. This shows that the the network ports 4 and 5 are bottlenecked by a 1 Gbps connection to the switch chip handling the link aggregation ports. This is also the reason why Netgear suggests using port 3 as one of the ports for handling the data transfer to/from the link aggregated ports. Simultaneous uploads and downloads also show some improvement, but the pure upload case is not any different from the single link case. These could be attributed to the limitations of the NAS itself. Note that we are using real-world data streams transferred using the OS file copy tools (and not artificial benchmarking programs) in these experiments.