In terms of overarching design, the MacBook is both treading new ground and much of the same. As we’ve mentioned before, the big promotional point for the MacBook is how small it is. And yet at the same time Apple has retained more or less all of the stylings that have come to define the modern unibody MacBook family design. The end result is a laptop that looks and acts almost exactly like a smaller MacBook Air or Retina MacBook Pro.

This leads to the new MacBook having all of the contours and finishes we have come to expect from a MacBook family laptop. The all-aluminum unibody design continues to impress and holds up well even with the MacBook’s smaller form factor. For the MacBook in particular it serves two goals for Apple, the first being to give the device a premium feel, but the second is to serve as a means of cooling the MacBook. 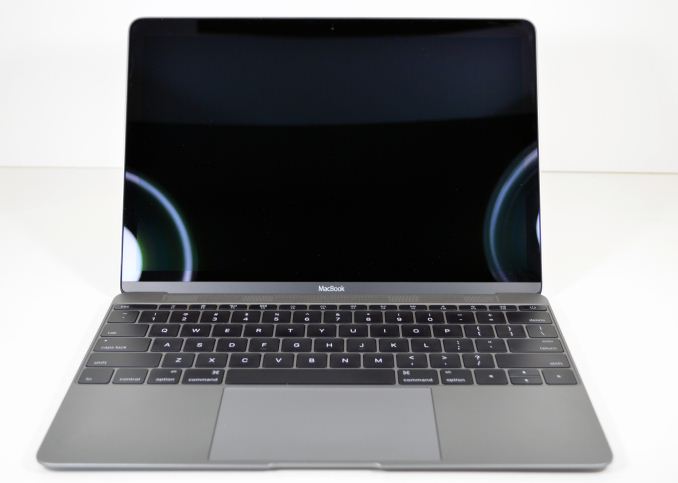 For one of the biggest changes in the MacBook compared to the MBA is the fact that this is a completely fanless design. There are no fans or even vents on the laptop to move heat or hot air; the closest thing that comes to a vent is the grating at the top of the laptop, above the keyboard, which houses other items such as the speakers. Otherwise all real heat dissipation is carried on by the aluminum case itself, which in turn is made practical by the use of the ultra-low power Core M processor. This also means that the MacBook is silent, containing no motorized parts and the only moving parts being the keyboard keys, the trackpad, and the screen hinge. The MacBook Air for its part was seldom loud, but for whisper quiet there’s no topping fanless.

Moving on, Apple retains the sloped design of their MacBook Air, leading to this MacBook having a similarly variable thickness. At its thickest part, towards the rear of the laptop, it’s just 13.1mm thick, and towards the front of the laptop this narrows to just 3.5mm. As with the MacBook Air I’m not sure if this sloped design is really necessary or beneficial versus a flat design, or if Apple does it merely to show off, but if you like your wrists low to the table, then at 3.5mm at its thinnest point, the MacBook is among the thinnest. Meanwhile the fact that the edges are also curved makes the MacBook deceptively thin overall, as even at 131mm it doesn’t feel even that thick when grabbed from the edges. 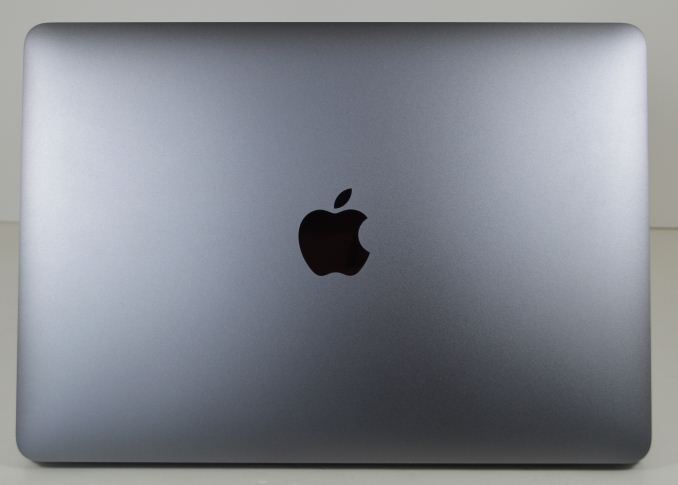 Perhaps the most notable – and admittedly cosmetic – change from the MacBook Air is the Apple logo on the top of the laptop. The iconic lit white logo is gone in favor of a black mirrored logo in its place. Apple doesn’t specifically address the logo, but with the tight constraints on both thickness and battery life – Apple needs to get 9+ hours off of a 39.7Wh battery driving a 12” Retina display – I suspect Apple finally sacrificed the logo to further save on power.

The other big cosmetic change here is the color of the aluminum laptop body itself, which in a first for an aluminum Mac now comes in multiple colors. Further reinforcing the crossover nature of the device and its place between a tablet and a traditional laptop, the MacBook comes in the current iOS device colors of Silver, Space Grey, and yes, Gold. Silver will be the closest to the traditional aluminum look, Space Grey is as close as you’ll get to a black MacBook, and Gold continues to defy our own expectations and be a popular color on Apple devices. Overall the current coloring is limited to just the MacBook, but given Apple’s drive for style, I wouldn’t be all that surprised if this eventually came to the Retina MacBook Pro as well, though perhaps not the MacBook Air for cost reasons.

I also want to quickly call attention to the lid hinge in the MacBook, which is something I feel Apple has done very well with. In such a thin and light laptop the percentage of the laptop’s weight that’s carried by the screen/lid has gone up, which risks the laptop becoming top-heavy. Not only has Apple managed to avoid a top-heavy design, but the hinge is as perfectly balanced as I’ve ever seen. The hinge is just loose enough that even trying to quickly lift the lid can’t really torque the laptop’s base up, and yet no looser than it needs to be. As a result the hinge still offers plenty of resistance without it being a problem for the relatively light base, and the laptop can easily be held at 90° without the lid dropping.

Moving on, we’ll cover the ports in depth a bit later, but we did want to quickly note the MacBook’s choice in ports while discussing the design. In another example of Apple minimalism – or maybe just another sign of the tablet/laptop crossover – the MacBook only has 2 ports: a USB Type-C port, and a 3.5mm combo jack for audio. All wired power, data, and video is routed over the single Type-C port, and the laptop itself is thin enough that there’s not room for something much larger, at the very least not without making the laptop thicker or eliminating the base’s curved sides. This makes the MacBook very much like an iPad, with its single Lightning port and a 3.5mm combo jack, and has some definite repercussions for usability. 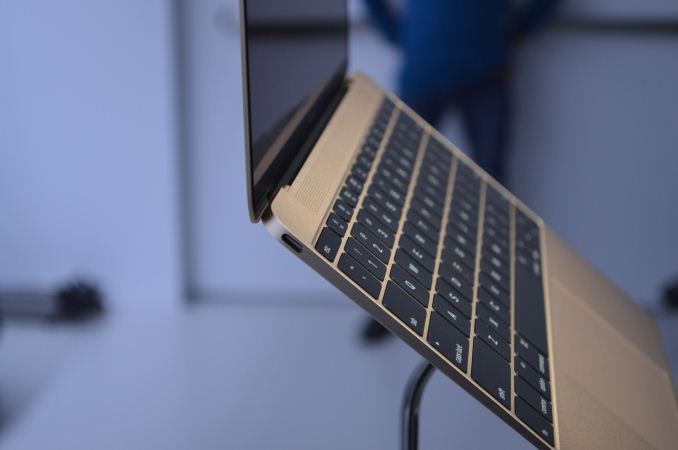 With regards to internal design there’s not a lot we can say at this time – Apple doesn’t like us disassembling review samples – but in lieu of the eventual iFixit teardown, Apple has posted a handful of sanitized shots of the MacBook’s internals. Apple is keen to show off the MacBook’s miniscule logic board, which is only 1/3rd the size of the 11” MacBook Air’s board. Much of this is enabled by the use of the Core M processor, itself using an especially small package to leave room for other components. This is combined with a highly integrated design that sees the RAM soldered on the board, and I suspect the SSD as well, meaning virtually nothing here is replaceable short of the entire logic board itself. In any case, along with this Apple has forgone some of the 3rd party chips like Intel’s Thunderbolt controller, which reduces to a minimum the number of chips they need alongside the Core M processor. 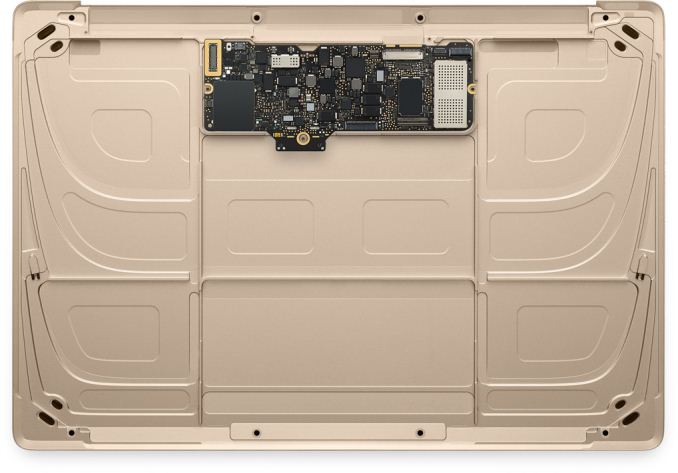 Update 04/15/2015: The iFixit MacBook teardown is in, giving us some excellent shots of the logic board. These pictures show us just how little is there beyond the Core M CPU, the RAM, SSD, a couple of extra controllers, and the necessary power management hardware.

With such a small logic board, Apple has filled out the rest of the laptops internals with batteries, 39.7Wh worth to be precise. This ends up being just a bit more than the 11” MBA’s 38Wh battery, again despite the smaller overall footprint, and is a result of Apple’s use of their new layered lithium polymer batteries, or as Apple likes to call it, their terraced, contoured battery cells. Overall LiPoly has slightly lower energy density than Lithium Ion, however in return it’s a more malleable medium, allowing for greater shape customization, which is what Apple is taking advantage of here. The end result is that Apple is able to better fill out the sloping, rounded case of the MacBook with battery cells by terracing them, squeezing out what little space would have otherwise remained.

Taken in overall, the MacBook has a distinct iOS-device feel to it at times. This is most immediately apparent from the selection of chassis colors, but digging deeper it extends into the electronics and internal design choices as well. Pairing a relatively large screen with a small logic board and filling out every nook & cranny with batteries is very much the iPad way of building things, never mind the fact that the Core M processor itself is designed in part to be a high-end tablet processor. Then of course is the port selection: just a single combined power/data port, and then the 3.5mm jack for audio.

The end result is a device that has an interesting laptop/tablet crossover design to it. The MacBook is still without a doubt a Mac laptop, but it’s also more like an iOS device than anything before it. Consequently while it’s still primarily meant to be used as a laptop – just a very portable, very light one – it’s also clear that Apple envisions it being used like a tablet. To be charged overnight, carried around and run during the day, and then put back on its charger for the night.