There is far more competition on the lower end of the price scale for Windows Phones now, with several companies launching devices this year. Going into this guide, people who follow Windows Phone might have guessed I would put the Nokia Lumia 630/635 here. The Lumia 630 is a good phone, and for the right price, it is not going to be a bad choice, but for me the 630 had too many compromises. There was no flash, no ambient light sensor, and on-screen keys. The Blu Win Jr delivers all of these features missing on the Lumia 630, and undercuts it on price as well. 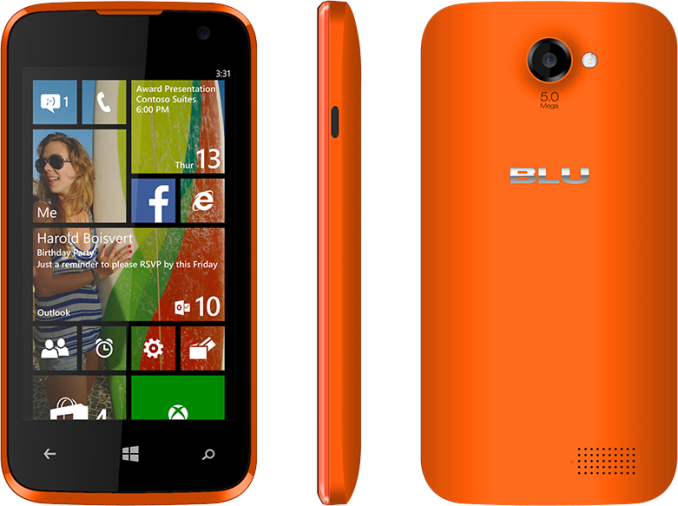 Though we have not tested it here, the Win Jr is a lot of phone for the less than $90 unlocked asking price. The four inch display is a bit small compared to the norm now, but it makes the 800x480 resolution a bit sharper. The Snapdragon 200 is certainly low end, but carries the same quad-core Cortex A7 at 1.2 GHz as the higher priced Snapdragon 400 models. Although the GPU is not as strong, with only 512 MB of RAM the low cost phones are not going to be great for gaming anyway.

There are certainly some corners cut to get to this price, but you still get a front facing camera, ambient light sensor, 5 MP rear camera with LED flash, capacitive navigation keys, and microSD to compliment the paltry 4 GB of onboard storage.

So there you have it. If you are a Windows Phone fan looking for the next flagship, it is there, or if you maybe just want to check out the platform, jump in for less than $100 with the Blu. The number of devices has expanded quite a bit since the last time we took a look at the platform, and hopefully this will continue into 2015 with some exciting new models.