Over the past twelve months, GIGABYTE has gone through an up and down motion with their BIOS and BIOS terminology – first we had 3D BIOS, with an image of a motherboard and an advanced mode.  This was a little slow at the start, but GIGABYTE ironed out the issues, although 3D BIOS was not that well received.  Fast forward to Z87, and we got a HD mode that gives smoother fonts and allowed customization.  The BIOS used on the F2A85XN-WiFi is an odd hybrid, featuring neither 3D BIOS nor the HD mode, and focusing solely on the Advanced mode of the 3D BIOS and the Classic mode of the new BIOS.

This means that our front page in the BIOS is our Advanced mode screen, showing basic details about the platform – BIOS version, BCLK, CPU frequency, memory size, CPU temperature and voltages.  The key points that the front screen of the BIOS is missing is the Board SKU name, as well as the CPU installed. 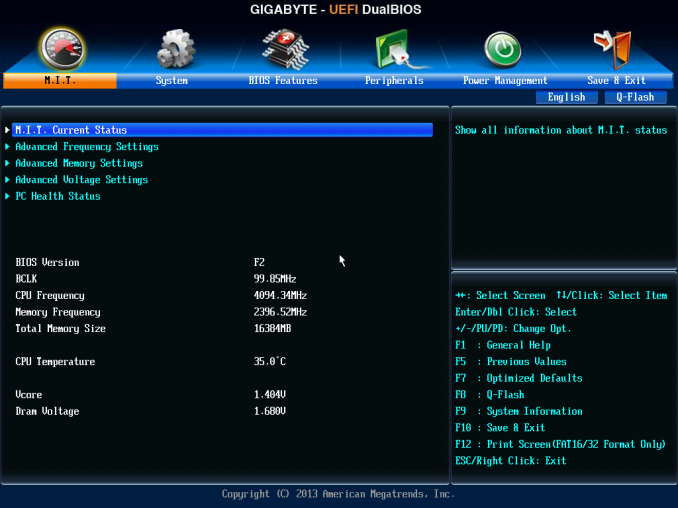 For the CPU installed, we have to navigate to M.I.T. Current Status, which shows the CPU ratios as well as memory settings.  Notice in the screenshot below we have the CPB Ratio (AMD Turbo Boost), and that the Core Temperature is wrong – I am not running this CPU at 7C while taking the screenshot. 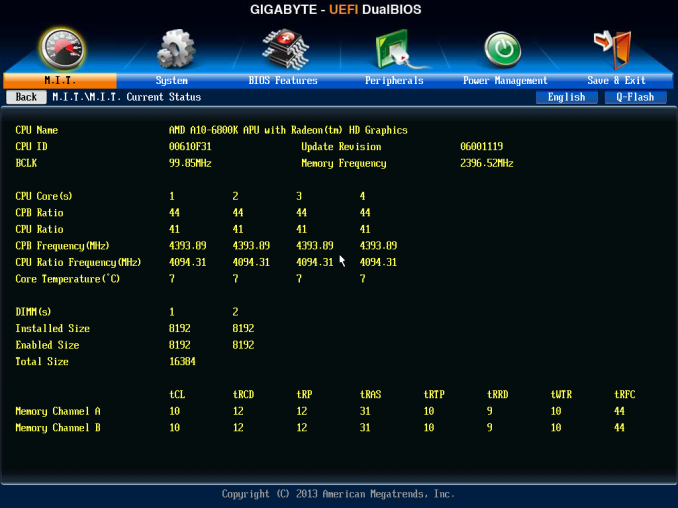 What the BIOS does give from the main screen is access to our main OC areas – Advanced Frequency, Memory and Voltage Settings.  GIGABYTE prefers to split the BIOS into these separate components, rather than CPU/Memory/Power on the presumed basis that it helps divide the components that could damage the system from those that actually would.  Ideally I would like to see some form of automatic overclock settings here for users to choose from (like in the HD BIOS), but for the time being users will have to rely on the EasyTune automatic overclock settings in the OS software.

In the Advanced Frequency Settings menu we get our options for BCLK, NB, CPU core Ratio and enabling XMP/AMP.  A couple of features users should be aware of – adjusting the BCLK by +10% also increases the NB and IGP graphics clock, although this is not shown.  The second issue is that raising/lowering the CPU Clock Ratio needs to be performed in conjunction with the CPB Ratio under the Advanced CPU Core Features menu option. 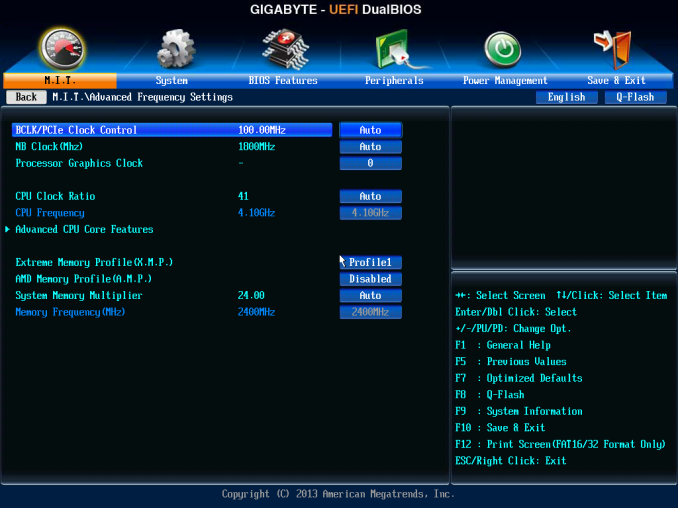 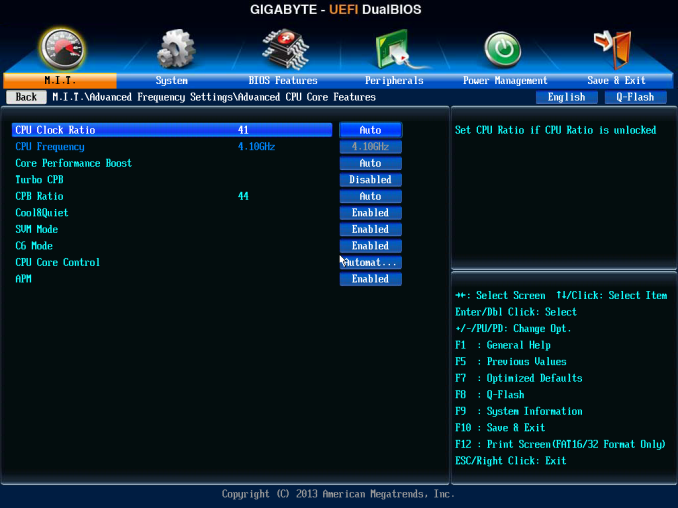 Even though there are two options for memory in this menu, XMP and AMP, I was able to use XMP on the AMD platform with my Corsair Vengeance Pro 2400 C10 memory kit without issue.

In the Advanced Memory Settings menu we have similar options to the frequency menu, although by selecting DRAM Timing to ‘Quick’ or ‘Expert’, this options up the sub-timings menus for manual adjustment: 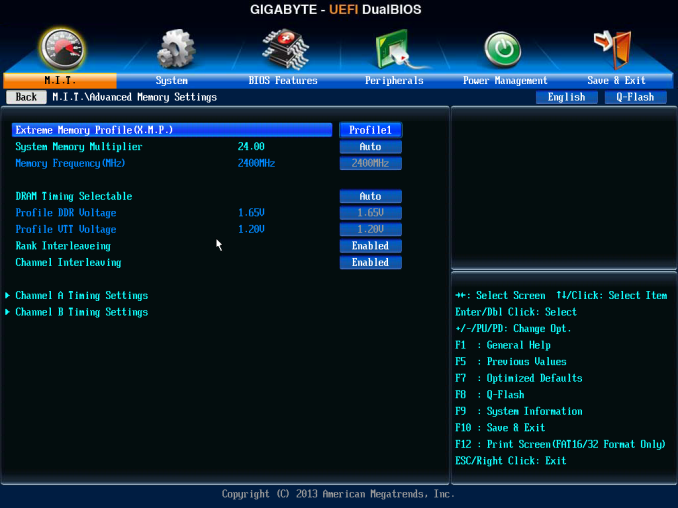 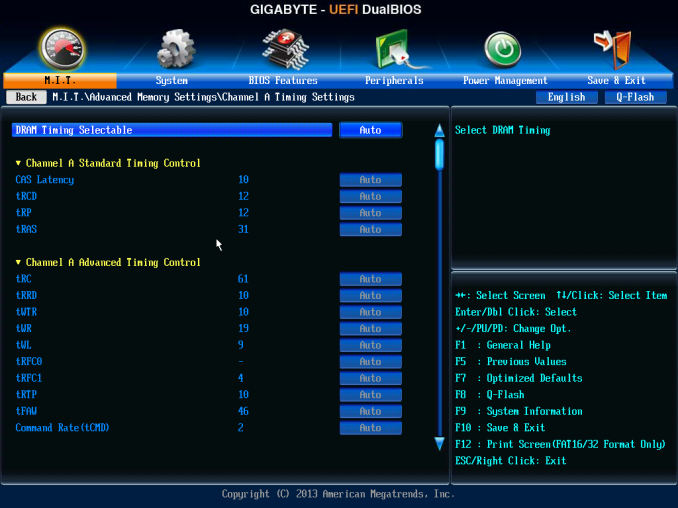 The Advanced Voltage Settings menu does what it says on the tin – we get access to the CPU VCore, North Bridge voltages, DRAM voltage and load line calibrations.  For the majority of motherboard implementations, this is all most users will need access to, perhaps with a graph to show what the options for LLC actually means.  If a user needs more than this, then BIOSes should offer an ‘OC’ switch on board.

The PC Health Status screen contains all the voltage readouts, temperature sensor readings and fan speeds of the motherboard.  Being a mini-ITX there is not an extensive array of values to look at, and the two fan headers have controls here as well.  As mentioned in previous reviews, GIGABYTE’s fan controls in the BIOS are labeled in PWM/C, meaning that power is applied for every degree Celcius the system detects.  This is an easy way out of providing fan controls, given that every fan has different characteristics and really users need to be able to define the idle and 100% points of the fan to begin with. 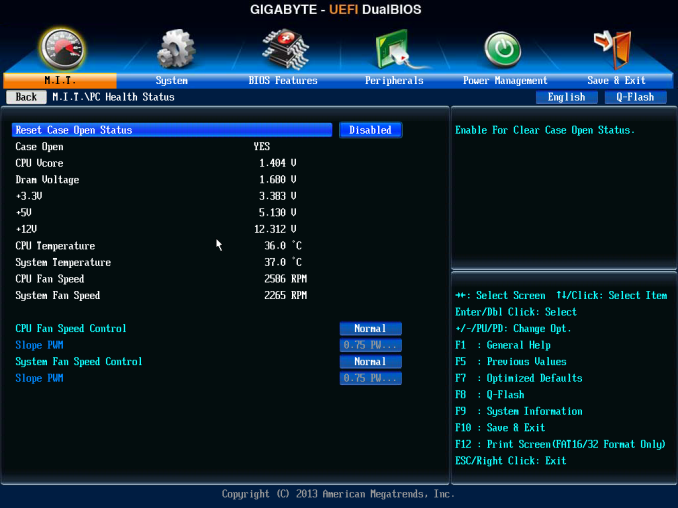 Elsewhere in the BIOS we have the regular array of BIOS features/boot options, options to enable/disable controllers or SATA type (IDE/AHCI/RAID), Boot Override and flashing the BIOS to a newer version. 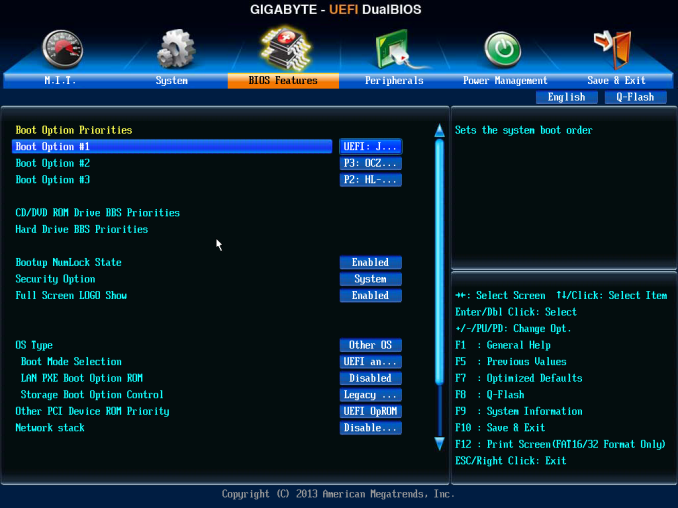 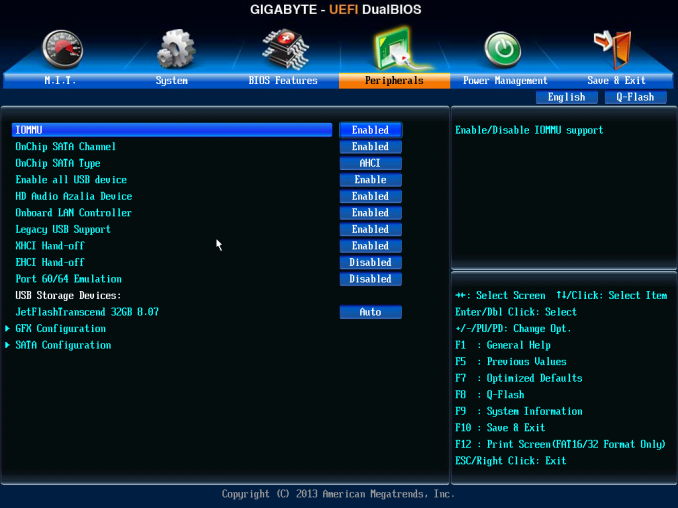 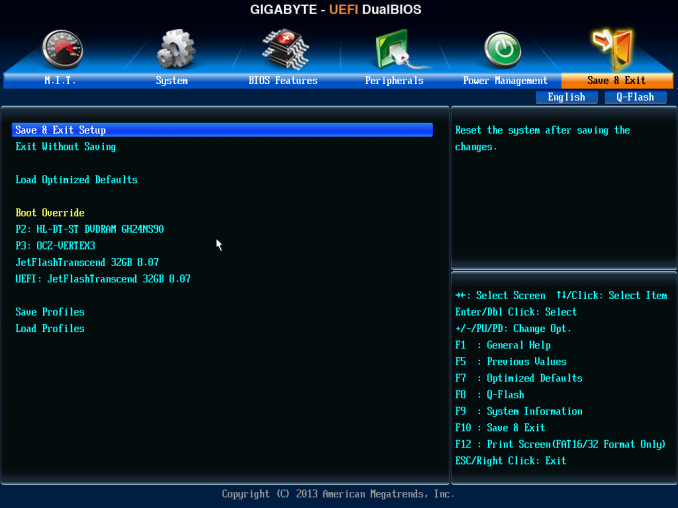 In our last GIGABYTE review, we got a chance to look at the latest version of EasyTune, and GIGABYTE’s way of molding all the additional features they have implemented in software over time into one package.  Despite early beta version hiccups, it promises to be a software package that is fun to play with and will satisfy user requests.  As the main focus of the year for most motherboard companies has been the Intel Z87 platform, that software was designed, in conjunction with hardware decisions made, on the 8-series.  As a result, due to few updates on the AMD side in terms of socket/chipset, we still have the older EasyTune6.

It should be noted that the installation CD did not install EasyTune6 when it asked to install all applications – it had to be manually selected in the menu.  At this point in time, the two main parts of the software on FM2 is EasyTune6 and @BIOS, the BIOS flashing utility.  We also have the LAN Optimizer, which is a GIGABYTE skinned Realtek software solution to optimize the NIC for various workloads.

EasyTune has been with us in various guises over the years.  The latest version is number six, which has been part of the main non 8-series GIGABYTE software package for at least two years now.  The premise of EasyTune is simple – a single interface in order to get all the information about the system, perhaps do some overclocking, adjust some fan settings and monitor what is going in under the hood.  Notice below it still detects the 6800K as Trinity rather than Richland: 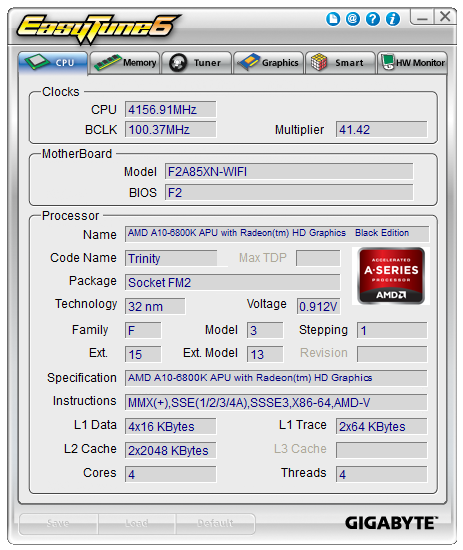 A step up from our encounter with the F2A85X-UP4 is the inclusion of automatic overclock options.  EasyTune6 offers its standard three modes of overclock, although the graphic and numbers displayed are different from other indicators on the image: 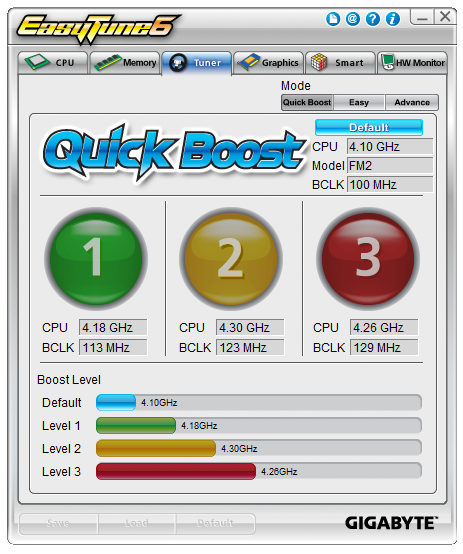 As shown we get three potential overclocks: 4.18 GHz (which is more an underclock), 4.3 GHz and 4.26 GHz – the key feature rising across these options is the BCLK, which affects the memory as well.  We go over these settings in the overclock section of this review.

Users also have the option for manual overclocks by selecting ‘Advance’ at the top of the Tuner tab.  Here we get multiplier and voltage control: 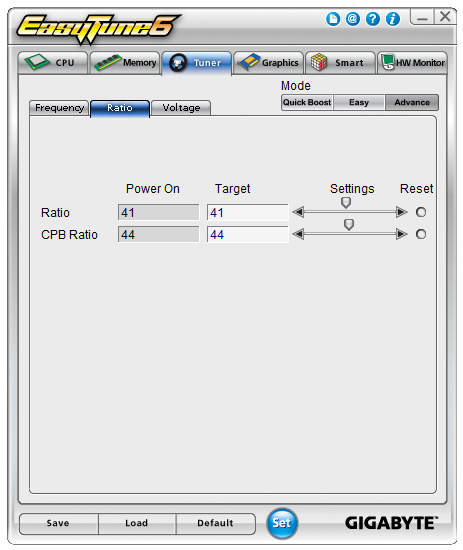 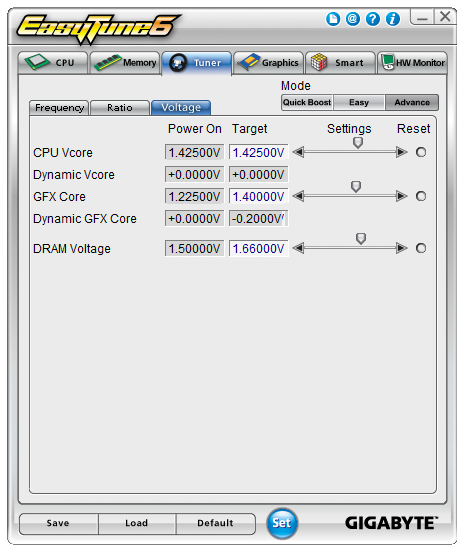 We can also control the fans in ET6, including manipulation of a gradient.  This is only a two-point gradient, where the y-axis says RPM and the x-axis gives temperature.  What is interesting is that below this are the actual numbers, whereby it says ‘Fan PWM, 35% (RPM)’.  This is an erroneous statement – fan speeds are not directly proportional to the power applied.  Typically a fan will start at a minimum RPM on low power, then after a threshold it will start to rise linearly.  But not in the fashion that GIGABYTE’s software suggests. 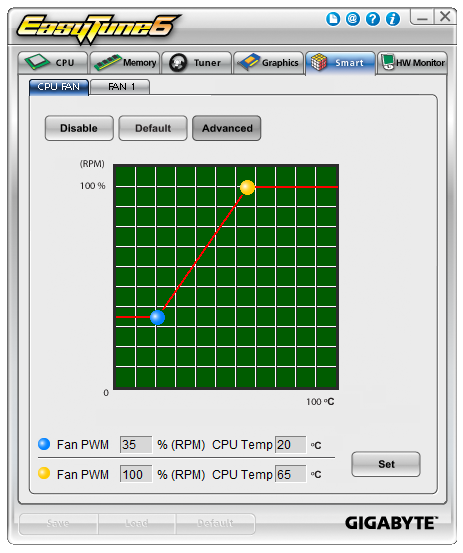 The final part of ET6 is the monitoring tool.  This gives a small graphical output for voltages, although the scale of the graph could be frustrating as it tries to take into account low voltages such as the CPU along with the +12 V rail in the same graph.  The default scan time of 3 seconds causes concern in our DPC Latency test, whereby we would score over 1000 microseconds when ET6 was running.  This could lead to audio issues when recording, thus it is recommended to disable ET6 when audio processing.  Also it is useful to note that the only effective way of monitoring the temperature of the CPU via software was in the Temp tab. 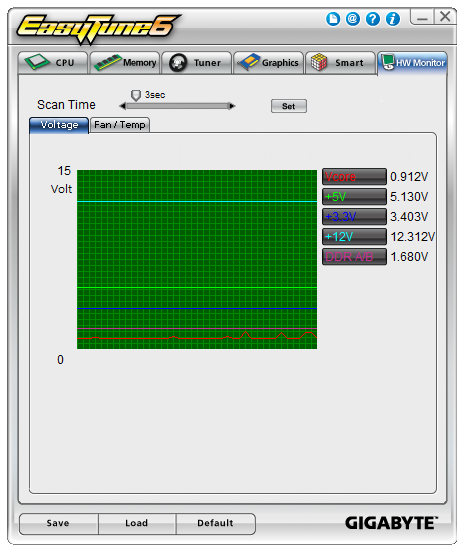 When it comes to updating the BIOS on a motherboard, there are two main different methods – through the BIOS itself, or in software.  Typically I prefer the former via a USB stick, but in circumstances where that is not applicable, the software tool is the way to go.  GIGABYTE has this pre-packaged into @BIOS which allows users to access the internet for the latest BIOS version, or upload from a file.

A recognizable trend in motherboard manufacturer software packages over the past few years is the inclusion of ways to manage the traffic through the Ethernet ports.  Depending on which NIC the motherboard has (Realtek, Intel, Atheros, Killer), some of these come with their own software for motherboard manufacturers to rebrand.  Some motherboard manufacturers prefer to bulk-buy licenses to software that does it on any network interface at minimal cost to the end user.  In the case of the F2A85XN-WiFi we get Realtek’s LAN Optimizer, which offers several modes (Game, Stream, Browser, Auto) which change the priorities of various pre-programmed lists of software.  Users can add software to this list, in the hope that their software is not disturbed by background processes. 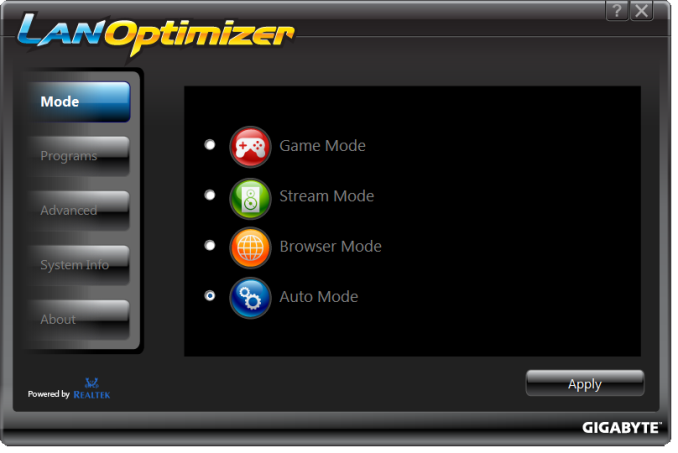 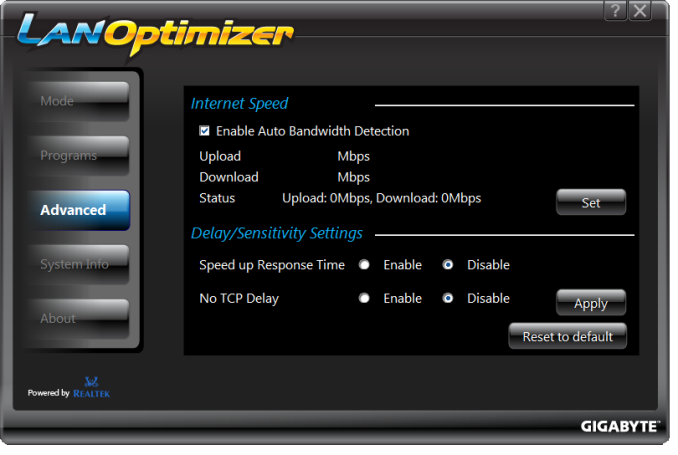