Our smartphone benchmarks are centered around browser-based tests, and this is one area that really shows how far behind Internet Explorer 10 Mobile is relative to the mobile versions of Safari and Chrome. The other part of this is looking at Krait 200 at 1GHz versus the higher-clocked parts we see in the more expensive Windows Phones, which allows us to look at relative performance on the same software platform. 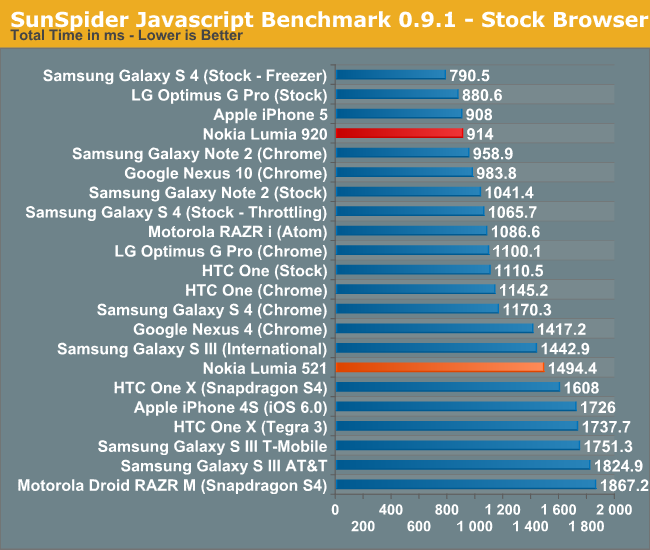 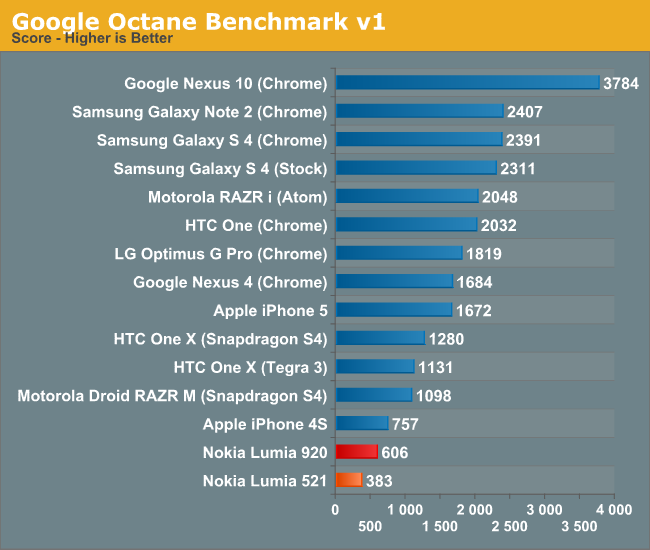 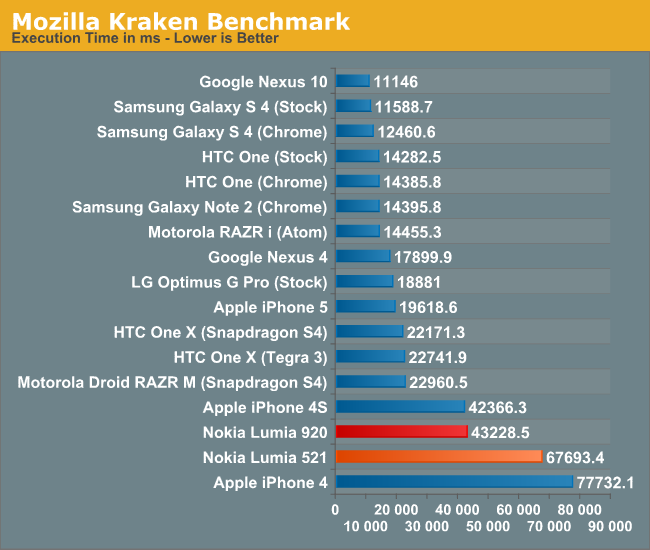 Sunspider performance is actually quite good, especially compared to other Krait 200-based devices like the One X and AT&T Galaxy S3. Where it falls off is in everything else—Kraken and Octane performance is just horrendous in comparison to the modern smartphone platforms. I didn’t think it was actually possible to see numbers that high in the Kraken benchmark until I ran it a half-dozen times on my 521 review unit as well as a friend’s Lumia 920. Microsoft clearly optimized for Sunspider, as we’ve seen over the years, and while that lets them stay competitive in that one benchmark, it doesn’t really mean anything as far as having decent or even acceptable browser performance. It’s just sad.

Between the 920 (MSM8960, so dual-core Krait 200 @ 1.5GHz and Adreno 225) and the 521, there’s a definite performance delta. Obviously, this comes through in roughly 50% faster benchmark numbers across the board, but in day to day use, it mostly makes itself felt in slower application loading and multitasking/task switching, which is also related to having just 512MB RAM instead of the 1GB of the 920. Multitasking in Windows Phone has never really sat well with me, because it’s not really multitasking in the traditional sense—the need to completely close and rehydrate tasks makes resuming applications exceedingly slow. Microsoft has always seemed to have an issue with app load times with ARM devices—this has been true since day one with Windows Phone, and is a problem with Windows RT tablets too—so the resulting combination can really kill any desire to run more than one task on your phone at a time.

I couldn’t run GFXBench (DXBenchmark) on the 521 because it didn’t meet the 1GB RAM requirement necessary to run the benchmark. I actually wasn’t even aware that GFXBench had such a requirement in place until I tried to install it on the 521. In the grand scheme of things, I suppose it doesn’t matter too much—we’re pretty familiar with Adreno 305 by now, and it seems to be the go-to GPU for Qualcomm’s new series of dual-core Krait 200 SoCs. In a platform that deemphasizes silicon performance in the end user experience as much as Windows Phone seems to, I’m not sure that the performance delta between this and Adreno 225 makes too much of a difference, particularly with a far lower-res screen. We’re starting to see the more 3D intensive games require 1GB of memory to run, so this isn’t the device for the hardcore gamers. It does fine with the typical slate of casual games though—Fruit Ninja, Angry Birds, and the like. 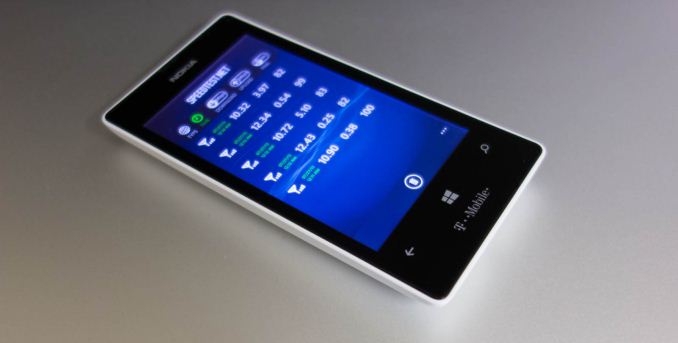 The air interface is probably something you could point to and say is a bit lacking—in this day and age, dual carrier HSPA+ is almost an expectation on T-Mobile and international non-LTE devices. But honestly, you don’t end up missing it much. T-Mobile’s HSPA+ network is quite robust both in Seattle as well as in Silicon Valley, the two places I spent time testing the 521, so 10+ Mb/s was basically the norm.

I couldn’t figure out how to get the Windows Phone SpeedTest app to email a CSV of the test results, so no graphs with binned speed tests like we have on Android reviews. We’ve had a lot of experience with T-Mobile’s HSPA+ network over the years though, and it tends to be very good in most metropolitan areas. Obviously, there’s a significant jump in speed between HSPA+ and LTE, but the real-world difference between single and dual-carrier HSPA+, at least on T-Mobile, seems to be much harder to discern perceptively. The lack of DC-HSPA+ is still a bit of a disappointment, but I’m not nearly as cut up over it as I was when I saw it on the specsheet.