As we saw last week with Mythlogic's Callisto 1512, ultrabooks in the 15.6" form factor are strange beasts. It's pretty clear the industry as a whole is moving towards thinner, lighter notebooks at every traditional size; Intel's ULV processors aren't as fast as the standard voltage parts, but they're close enough that it can be difficult to justify the added bulk of a thicker machine. Couple this industry transition to slightly slower but much more power frugal parts with the increased emphasis on touch interfaces that Windows 8 brought and you end up with the most upheaval in notebook design we've seen in a long time. 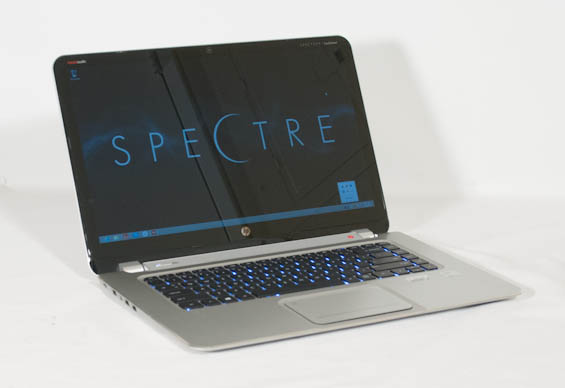 Chances are if you've been paying attention, two things popped out at you from the spec sheet: the Thunderbolt port, and the SSD caching. One of these additions is a fantastic value add; the other almost seems like a sad joke. Understanding that there are a lot of premium features on the Spectre XT TouchSmart, and that Thunderbolt isn't inexpensive to add, being stuck with an SSD cache backing up a dismally slow 5,400-RPM mechanical hard drive in a $1,299 notebook is inexcusable.

It's frustrating because the rest of the design is firing on all cylinders. The Intel Core i7 CPU is more than fast enough for the majority of tasks, HP includes the requisite 8GB of DDR3-1600 to guarantee a comfortable Windows experience, and 5GHz wireless networking is accounted for. Connectivity is healthy with USB 3.0 support alongside Thunderbolt, there are four speakers with BeatsAudio branding, and the display is even a quality 1080p IPS panel. So why hamstring the build with Intel Smart Response Technology instead of just installing a 128GB SSD minimum? Was the cost savings really worth it?