The Fractal Design Node 605, when opened up, looks like it's going to be pretty easy to assemble a system inside. Thankfully that turned out to be true; the Node 605 is probably the easiest media center case I've ever built. What absolutely must be kept in mind is something I mentioned earlier: the Node 605 supports a lot of different hardware, but it does not necessarily support it all at once. So while you can definitely mount an ATX motherboard in the Node 605, the heatsink on our ATX/MicroATX testbed wouldn't fit, so as with the SilverStone Grandia GD07 I elected to go with the mITX testbed. That turned out to be absolutely the right choice when testing came around.

Fractal Design doesn't have any studs or standoffs pre-installed, so you'll have to put those in for your motherboard yourself. This is a convenience I've been starting to see on less and less expensive cases, and given the high price of the Node 605 I'm tempted to ding them at least a little for not including it. Getting the motherboard in and everything hooked up was fairly simple, though, but note that cable management is basically non-existent in this case. 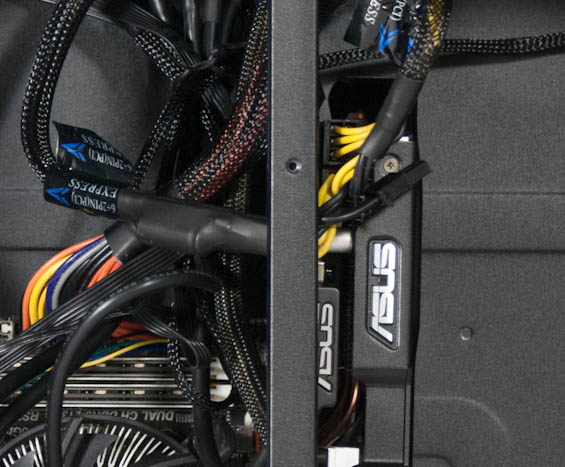 Installing the power supply was easy, too, but where things got heady was when I installed the GeForce GTX 560 Ti. To install a video card, it's best practice to remove the bar in the center of the case with the two drive cages so you have more room. Where things got dicey was when I had to reinstall the bar: the top-mounted power leads for the 560 Ti actually conflicted with the bar. You can see in the photo how clearance became an issue. 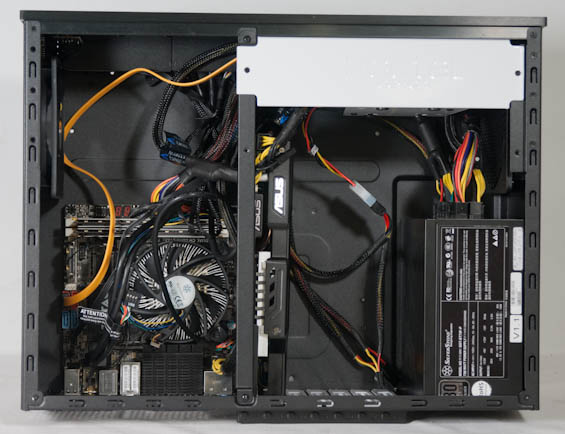 The drive cages themselves are easy enough to use, as Fractal Design carried over the design from the Node 304. What I said about the Node 605 supporting a lot of hardware but not necessarily simultaneously comes up again here; take a look at the clearance issues potentially posed by the placement of the drive cages.

Wiring the Node 605 up was easy, but as I said there's virtually no allowance made for cable management. You can see that the leads from the power supply run in front of the fan and circle around to the motherboard. Some zip-ties could certainly go some of the way towards cleaning up cabling, but there's just nowhere to put the cables themselves. What I'd really like to see is an HTPC enclosure that has space beneath the motherboard tray for routing cables.

Putting the Node 605 together resulted in a couple of hiccups but nothing serious. Just because the case can fit a full ATX motherboard doesn't mean you should, though; the mITX board looks roughly the right size and I'd hesitate to install anything bigger than a Micro-ATX board. It's true that using a Micro-ATX or ATX board with the PCIe x16 slot one space down might alleviate clearance issues with the center retaining bar, but remember that you then have to contend with the drive cages, and in my assembly I'm already working with one of them missing.