Apple made a similar "up to 2x" claim for GPU performance. It didn't share any benchmarks, but there are four options here:

1) PowerVR SGX 543MP2 (same as in A5) at 2x the clock speed
2) PowerVR SGX 543MP4 at the same clock as the MP2 in the A5
3) Marginally higher clocked PowerVR SGX 543MP3
4) Next-gen PowerVR Rogue GPU
It's too early for #4. The first option makes sense but you run into the same issues as on the CPU side with higher voltages used to ramp clocks up (also possible that you drop voltages in the move to the new process technology).
The second option trades voltage for die area, which based on the A5X Apple is clearly willing to spend where necessary.
The third is sort of the best of both worlds. You don't take a huge die area penalty and at the same time don't run at a significantly higher frequency, and you can get to that same 2x value. 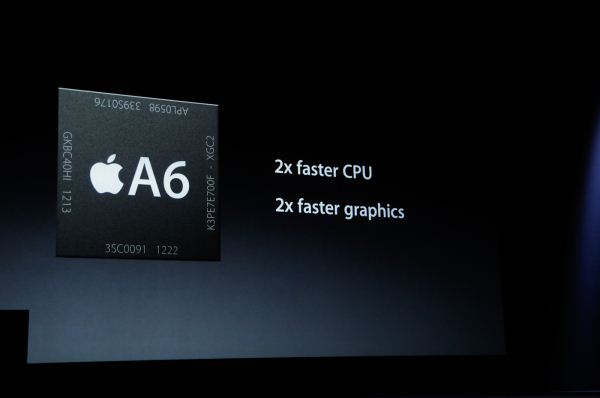 The third option is the most elegant and likely what Apple chose here. Remember that overall die size is dictated by the amount of IO you have around the chip. The A5X had four 32-bit LPDDR2 memory controllers, which gave Apple a huge die area to work with. The move to a smaller manufacturing process cuts down the total die area, which means Apple would either have to add a ton of compute (to fill empty space, no sense in shipping a big chip with a bunch of unused area) or reduce the memory interface to compensate. Pair that knowledge with the fact that Apple doesn't have the same memory bandwidth requirements on the iPhone 5 (0.7MP vs. 3.1MP display) and it makes sense that Apple would go for a narrower memory interface with the A6 compared to the A5X.
How much narrower? Phil Schiller mentioned the A6 was 22% smaller than the A5. We can assume this is compared to the 45nm A5 and not the 32nm A5r2, which would mean that we don't have any more memory channels compared to the A5. In other words, it's quite likely the A6 has a 2x32-bit LPDDR2 memory interface once again.

There's not much more to add for now. We'll have a device in a week and I suspect the first reviews will be out a day or two before then. Then the real work begins on finding out exactly what Apple has done inside the A6. If anyone has been dying to put together some good low level iOS benchmarks, now is the time to start.
This is a huge deal for Apple. It puts the company in another league when it comes to vertical integration. The risks are higher (ARM's own designs are tested and proven across tons of different devices/platforms) but the payoff is potentially much greater. As Qualcomm discovered, it's far easier to differentiate (and dominate?) if you're shipping IP that's truly unique from what everyone else has.
Now we get to see just how good Apple's CPU team really is.
The A6's CPU
Tweet
PRINT THIS ARTICLE
Comments Locked