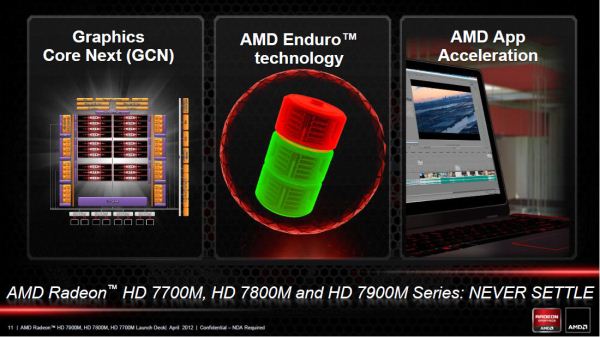 With the chips themselves out of the way, let’s discuss some of the other features. The three key items AMD mentions in the above slide are GCN, AMD Enduro Technology, and AMD App Acceleration. The first we’ve already covered, and there’s not much new to say with regards to AMD’s App Acceleration—there are apparently 200+ GPU-accelerated applications. The second item sounds far more interesting for the mobile world, though, so let’s dig a little deeper into Enduro and AMD’s power technologies in general. The following gallery contains all the pertinent slides for this discussion.

Like the desktop Southern Islands parts, all of the higher-end mobile variants will have power gating and ZeroCore technology. That means that idle power draw should be a step down from where we’ve seen it on previous mobile GPUs, and for CrossFire configurations it means that the secondary GPU can be completely shut down when it’s not in use. As for Enduro, AMD informed us that this is the latest iteration of their dynamic switchable graphics technology. We asked for additional details, but AMD didn’t really have anything more to add to the discussion so it could be that Enduro functions exactly like dynamic switchable graphics on the previous generation 6000M parts. And despite the above slide showing an AMD APU and GPU, Enduro will also work with Intel CPUs like Sandy Bridge and Ivy Bridge.

There are two problems that AMD didn’t really have an answer for in our conversation: first, the user interface for dynamic switchable graphics was pretty weak the last time we looked at it. We’re not sure if it’s any better six months later, but let’s hope so. The second is the real concern: until we can get AMD driver updates separate from Intel driver updates, it’s our opinion that Enduro won’t be particularly useful on Intel gaming platforms. With HD 7970M being such a potent chip, it would certainly be CPU-limited on AMD’s Llano APU, and unless Trinity really manages to improve on Bulldozer performance, it will likely also pose a CPU bottleneck for HD 7970M (never mind CrossFire configurations). So, once again we informed AMD that we really need an answer to the driver updates dilemma for switchable graphics laptops, and they need to get laptop OEMs (e.g. Sony and HP) to allow users to download AMD reference drivers.

Of course, if ZeroCore technology and power gating works well enough, all this discussion of switchable graphics may be moot: imagine a laptop with a discrete GPU that idles at the same power requirements as an IGP; why would you even want switchable graphics if you don’t need it to save power? We’ll have to wait for hardware to see how 7700M and above fare in terms of idle and low load power draw, but we could end up pleasantly surprised. I’ve stated in the past that the holy grail for laptop GPUs at this point is to use as little power as IGPs when there’s nothing complex happening, and ZeroCore and power gating could actually deliver on that goal.

One final feature that was mostly glossed over in the slides is VCE support—AMD’s Video Codec Engine that we have yet to see demonstrated. It’s still present on these mobile parts, and on paper VCE is a competitor to Intel’s Quick Sync technology. Originally discussed back in December when AMD launched HD 7970, we thought we’d see some software make use of the feature by this point. I even went so far as to flat out ask AMD if the VCE hardware is broken in Southern Islands, as it’s been over four months now. Their response: “VCE is anything BUT broken – we’ll have lots more on it shortly - Stay tuned.” And that we will, as I’d love to see AMD offer a more flexible alternative to Quick Sync.

One final power-related technology making its first appearance on the mobile AMD chips is PowerTune. In the past, GPUs were designed with very specific TDP targets, and clock speeds had to be selected so that power (and heat) stayed within the allotted range. With so-called “power viruses” like OCCT and Furmark, users started encountering issues with GPUs exceeding those limits, and the results ranged from crashing to even failed hardware. NVIDIA and AMD both responded initially with attempts to detect such applications and adjust clocks accordingly, but that’s a crude approach and it won’t always work with newer programs. PowerTune is a hardware solution to the problem, with intelligent hardware in the chips that determines the current load and how stressful an application is—so it’s not just a thermal diode. PowerTune looks at environmental factors such as temperature along with internal logic to determine what the workload is and set clocks appropriately. The end result is that performance can be maximized for applications that aren’t as strenuous, allowing performance improvements of up to 10% in some cases, all without exceeding the TDP. This is actually a good thing, especially for laptops and notebooks, and ever since AMD first introduced PowerTune in the HD 6970 I’ve been waiting for it to arrive in mobile chips. 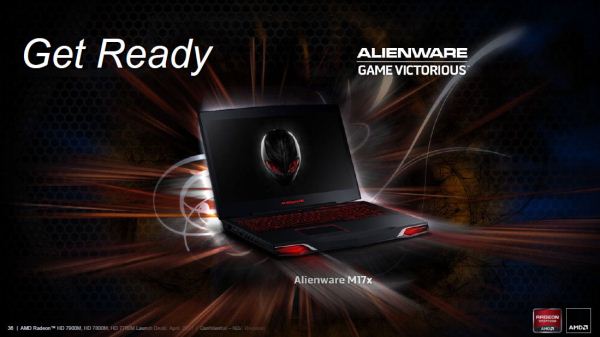 There’s not much else to say at this point, other than mobile GCN laptops look promising. The first announced notebook with a GCN GPU is Alienware’s M17x, which can now be configured with the new HD 7970M starting at $1900. We’re working to get the revised M17x in for review so we can see for ourselves just how potent HD 7970M is.