The battle for graphics supremacy has been going for well over a decade now, with several casualties of war along the way (RIP 3dfx, Trident, S3, etc.). The primary competitors continue to be NVIDIA and AMD, and with NVIDIA having recently reclaimed the single GPU performance crown on both desktops and laptops with their GTX 580/580M, it’s time for AMD to respond. We’re not presenting any details for next generation desktop parts at present, and in fact the HD 6990M isn’t much of a surprise, but either way AMD is ready to release the details of their next mobile GPU.

We recently covered the mobile GPU landscape, with a discussion of the various performance levels and price segments. The price/performance ratio is actually pretty similar between AMD and NVIDIA mobile GPUs (at least until we hit the top-tier models), and both have a decent number of design wins with notebook ODMs. The current mobile performance crown goes to NVIDIA’s recently launched GTX 580M, but along with the performance crown comes a hefty price and performance bill that needs to be paid. AMD’s top mobile part prior to today’s announcement is the 6970M, which is basically a lower clocked version of the desktop Barts core with some of the Stream processors disabled (essentially a mobile HD 6850). Our testing has shown the 6970M to offer just slightly less performance on average compared to the GTX 485M, but interestingly enough NVIDIA managed to use less power in low/idle loads than AMD. Of course, even the HD 6970M is a trimmed Barts core, and there’s still the desktop 6950/6970 Cayman core that has yet to see a mobile variant, which brings us to today’s announcement.

If you were hoping to see a truly crazy mobile GPU running off the Cayman architecture, we’re unfortunately not getting that. Unlike the desktop 6990, we’re also not talking about a dual-GPU in a single card solution. Instead, the HD 6990M will be a full Barts core, with all 1120 shaders enabled. (The closest desktop equivalent is the HD 6870, which comes clocked at 900MHz, 25% higher than the 6990M.) Besides the now-standard DX11 support that AMD has been shipping since the first HD 5000 parts, 6990M also includes HD3D (stereoscopic 3D), OpenCL 1.1, and DirectCompute 11 support. AMD groups many of the features under the umbrella of "AMD App Acceleration", though there's technically nothing new here as all the 5000M and 6000M DX11 parts use the same drivers and support nearly the same features.

Looking at the mobile parts, the shader count gives the 6990M an immediate 17% boost in performance relative to the 6970M, and with a slightly higher cores clock as well (715MHz on the 6990M vs. 680MHz on the 6970M), we’re looking at up to 23% higher performance than the 6970M. Both the 6970M and 6990M continue to feature 3600MHz GDDR5 memory, although the 6990M comes with 2GB instead of 1GB. AMD also enabled OverDrive up to 740MHz for the 6990M if you want to try some quick overclocking. Here’s how performance between the AMD parts stacks up, according to AMD’s internal testing (using a desktop 3.4GHz Phenom II CPU): 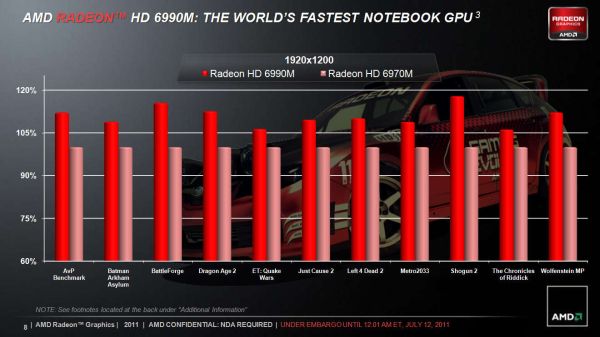 On the other side of the fence, NVIDIA’s GTX 580M has the same number of CUDA cores as the GTX 485M (384 cores), but with an 8% increase in clock speed. (The closets desktop equivalent is the GTX 560 Ti, which comes clocked 37% higher than the 580M.) Our earlier testing of the 485M and 6970M resulted in nearly identical average gaming performance across eight tested games, with both sides winning a few titles. In theory, then, HD 6990M should retake the mobile performance crown given the greater increase in compute and clock speeds relative to the second-tier parts. The following slide uses simulated performance (e.g. a downclocked desktop GTX 560 Ti GPU running at mobile speeds and with only 1GB GDDR5, again with a 3.4GHz Phenom II CPU), so take these results with a grain of salt:

Both the AMD and NVIDIA parts should be plenty fast for 1080p mobile gaming, so the real question is more likely to be who offers the best overall value. Sure, value in a gaming notebook is something of an oxymoron, but unless you absolutely need CUDA/PhysX support on the NVIDIA side or are looking at Bitcoin mining on the AMD side, performance is going to be close enough that pricing will sway the vote. Availability of the 6990M starts today, with the Alienware M18x coming in both single and CrossFire configurations. Clevo will also support the HD 6990M in their P170HM, P150HM, and X7200 notebooks, which means we’ll see whitebooks from the usual suspects like Eurocom, AVADirect, and others. Here's AMD's complete high-end mobile GPU lineup:

As we've noted in the past, the 6000M consists of parts from both the Evergreen and Northern Islands series of graphics chips. For many users, the difference between the two isn't all that important, but Northern Islands does upgrade the video engine to UVD3 where Evergreen is UVD2.2. Also worth remembering is that the 6800M parts are really just renamed 5800M parts with slightly altered clocks in some cases, so they're not as attractive as the 6900M parts. Finally, the 6800M parts can come with either GDDR5 or DDR3, the latter being significantly slower and thus less desirable. Our table only uses the specs from GDDR5 variants, so if you're shopping for a 6800M make sure you get a GDDR5 model.

Outside of their newest mobile GPU, we also asked AMD about the current state of their switchable graphics on Intel platforms. AMD says they should have some partners releasing laptops with application based switching (e.g. similar to NVIDIA’s Optimus), but that will likely be with lower performance GPUs. In contrast, NVIDIA is touting Optimus support on certain GTX 580M configurations, though as always it’s up to the notebook vendors to utilize the feature. We haven’t had a chance to get hands on time with any form of AMD switchable graphics for some time, so the jury is still out. We hope to have an appropriate laptop for testing in the not-too-distant future, at which time we’ll be able to provide a better answer on which solution is the overall winner.

As for the question of who actually takes home the mobile gaming performance crown, we hope to have both GTX 580M and HD 6990M notebooks for testing in the coming weeks. On paper and using our previous 6970M and GTX 485M results, it looks like the 6990M should come out on top, but with various driver updates in the past several months we’re not ready to declare an official winner. If you’re looking for more than a few slides and potentially biased game selections, stay tuned: we’ll provide our usual in-depth look at real-world performance as soon as we can get hardware into our labs. Our money is still going to be on whoever can come in at a lower price point, and if recent history is any indication, that will likely be AMD with the 6990M. Update: Alienware now has both the GTX 580M SLI and HD 6990M CrossFire configurations available on their web site; at present, the SLI setup costs $700 more than the CrossFire configuration, which makes the 6990 an easy recommendation.