It Feels So Good

Apple can't help but talk up the fact that the MacBook Air is incredibly thin; something you honestly can't really appreciate until seeing/holding it in person.

The design is amazing and Apple's designers styled the Air in such a way that the shape of the notebook further accentuates how thin it is. It truly is beautiful, and I was a skeptic going into this review. PC notebook manufacturers are always asking me how they can better compete with Apple, designs like the Air are the perfect example of what we should be seeing from the Dells and Lenovos of the world but just aren't. 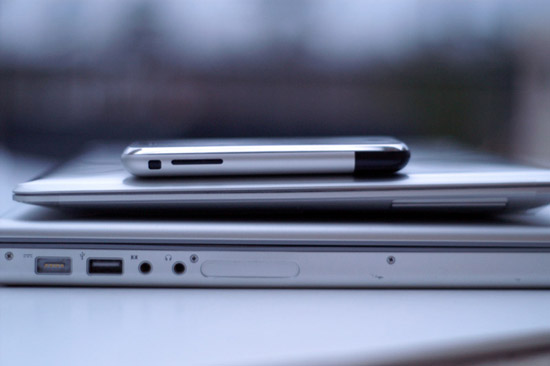 From top to bottom: iPhone, Macbook Air and the original MacBook Pro

The screen hinge is also very tight but I'm unsure how that will wear over time; even the best constructed notebooks tend to fare poorly in this department as you use them.

The aluminum exterior does scratch pretty easily, even when taking good care of it we still managed to incur a few scratches on its underside. But just like dings on a new car, you get used to them after a while and stop worrying so much. The all aluminum exterior also means that it'll always shock me after going through airport security, just like my MacBook Pro - great; it's a small price to pay for a sturdy system.

The feet on the bottom of the Air are also very well done; they keep the system elevated enough to avoid scratching the base while flowing with the design.

The form factor of the MacBook Air is absolutely perfect, I can't stress enough how much Apple's entire lineup of notebooks needs to feel like the Air does in your hands.

Apple does fall very short in bundling accessories with the Air. At $1799 I don't expect Apple to include everything, but the Air really needs a well designed case. Apple kept mentioning that you can fit the Air inside a manilla folder, but failed to design a better alternative for you to stick it in when carrying it around. If you want to even attempt to carry accessories with the Air, you'll need a standard notebook bag which is designed for much larger systems - partially defeating the purpose of having such a thin and light notebook.

While I'd like to see Apple step to the plate and offer a case worthy of the Air, there is a great opportunity for a clever third party manufacturer to make something efficient for carrying the Air and its accessories around.