Kicking off yet another earnings season, we once again start with Intel. The reigning 800lb gorilla of the chipmaking world is reporting its Q4 2020 and full-year financial results, closing the book on an eventful 2021 for the company. The first full year of the pandemic has seen Intel once again set revenue records, making this the sixth record year in a row, but it’s also clear that headwinds are going to be approaching for the company, both in respect to shifts in product demand and in the sizable investments needed to build the next generation of leading-edge fabs.

Starting with quarterly results, for the fourth quarter of 2021, Intel reported $20.5B in revenue, which is a small jump of 3% over the year-ago quarter. Intel has managed to improve upon an already strong Q4’20, which is always welcome news for the biggest quarter of the year for the company. Intel’s net income hasn’t fared quite as well, however, and continues to degrade from Intel’s highs of a few years ago. For the most recent quarter Intel booked $4.6B in profit, down $1.3B (21%) from the year-ago quarter.

Driving this drop has been a confluence of factors for Intel. The company’s consumer product cycles are not quite aligned on a yearly basis, which for Intel meant that the company didn’t go into Q4 with a new lineup of mobile processors like they did in Q4’20. Intel’s famous gross margin has also taken a hit as CEO Pat Gelsinger has focused on Intel’s IDM 2.0 initiative, which calls for making some expensive investments into manufacturing technology. The net result is still a company that’s still quite profitable, but is not quite the monster it was at its profitability peak.

Breaking things down on a group basis, most of Intel’s internal reporting groups have grown over the year-ago quarter. Data center revenue was up 20% to $7.3B, with both platform volumes and ASPs rising versus the year-ago quarter. Intel cites strong enterprise demand – especially from government customers – as helping to drive DCG’s improved performance. 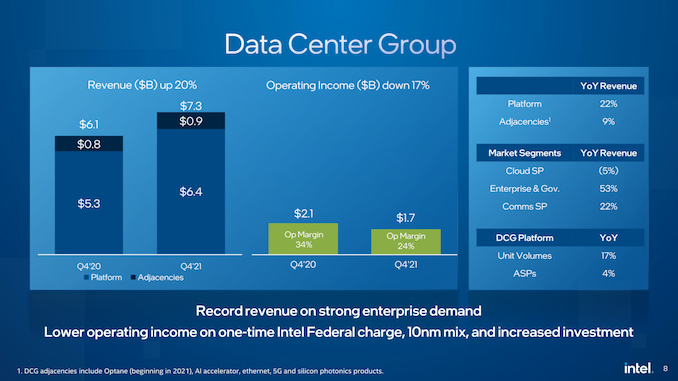 The story is similar for Intel’s IoT and programmable solutions (FPGA) groups, all of which are up versus Q4’20. IoT and Mobileye revenues have enjoyed a jump in revenues thanks to the overall market recovery from COVID, and even the Programmable Solutions Group is seeing a 15% boost in revenue.

Meanwhile, we must bid adieu to Intel’s Non-Volatile Memory Solutions Group (NSG). Intel completed the first part of their sale of their NAND business to SK Hynix at the end of 2021, and while Intel still retains some assets per a complex sales deal that doesn’t fully close for another couple of years, Q4’21 was essentially the last quarter where Intel has been meaningfully involved in the NAND business. 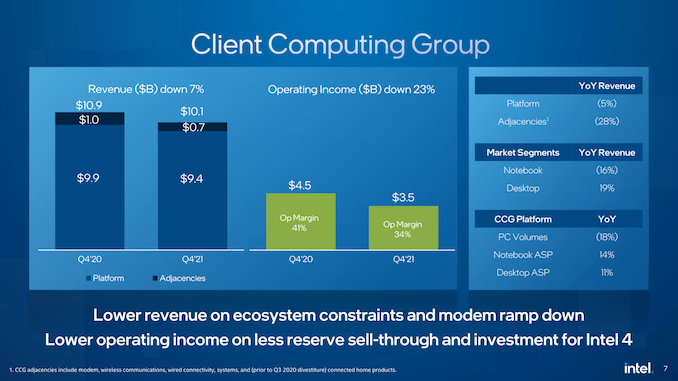 Unfortunately for all the good news Intel has to report, the hero of 2020, the Client Computing Group (CCG) was the odd man out for Q4’21, becoming the only group to see revenue fall versus the year-ago quarter. Overall CCG revenue fell 7%, with processor revenues falling 5% while the group’s adjacencies fell 28%. In explaining the difference, Intel is attributing the drop in revenue to “ecosystem constraints” as well as the ramp-down of their cellular modem business.

But looking at product shipment information, it’s clear that Intel has taken a hard hit in notebook revenue; notebook unit sales were down 26% versus the year-ago quarter, and revenue was down 16%, buoyed in part by a 14% increase in notebook processor ASPs. A quick reading would suggest that Intel is feeling the pinch of the bottom falling out of the Chromebook market, which unlike the broader notebook market, has rapidly tapered off in the COVID recovery phase. Losing these low-end processor sales has helped to boost ASPs, but it’s still revenue (and profits) lost. Also not helping matters is that while Intel was in the middle of shipping then-new Tiger Lake mobile CPUs in Q4’20, for Q4’21 they did not have any new mobile hardware – mobile Alder Lake parts only recently started shipping to OEMs.

On the flip side, desktop revenue and ASPs were up on a year-over-year basis. Having launched desktop Alder Lake in Q4 means that Intel spent much of the quarter shipping brand-new high-margin hardware for the desktop. Altogether desktop volumes were up 7%, ASPs up 11%, and revenue up 19% for the quarter.

Shifting over to full year results, despite ongoing supply challenges due to the chip crunch, significant competition, and a pivot in company direction with the hiring of Pat Gelsinger as Intel’s CEO, for 2021 Intel still managed to set a yearly revenue record for the sixth year in a row. Overall the company booked $79.0B in revenue for the year, 1% more than 2020. Intel’s overall net income didn’t fare quite as well– dogged by issues similar to their Q4 earnings – but the company is still going out on $19.9B in net income for the year, a 5% drop from 2020.

Gross margins for the entire year were 55.4%, down 0.6 percentage points from 2020. As with Intel’s quarterly results, this is generally tied to the company’s R&D spending and other manufacturing investments; Intel is giving up profitability now in hopes of growing the company down the line.

Looking at Intel’s individual business groups, the company’s two leading business groups, client and data center, were nearly flat on the year. In an inverse from Q4 results, here it was CCG that saw revenue growth, booking $40.5B in revenue for a 1% increase over 2020. Meanwhile DCG revenue was down 1% versus the previous year, with DCG starting off 2021 much softer than it ended the year.

And while we don’t normally track the operating margins of the individual groups, it’s noteworthy that in explaining a drop for DCG’s operating margins, Intel has cited a “one-time Intel Federal charge.” This would appear to be an allusion to the Aurora supercomputer, where Intel apparently owes the US Government penalty payments (in essence, a partial refund) for not completing the supercomputer on time. 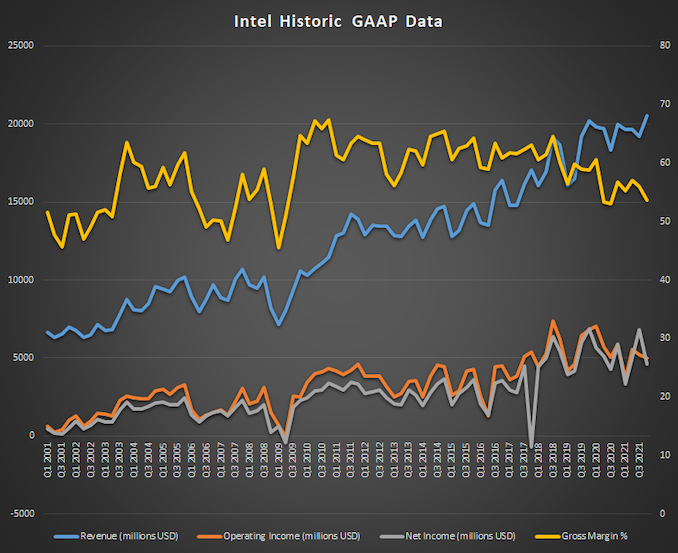 Otherwise, 2021 was also a good year for Intel’s remaining groups, the outbound NSG excluded. The Mobileye automotive segment of the company saw its revenues for 2021 spike 43% over the previous year, as the COVID-related slowdown in spending by automobile manufacturers has all but reversed. The IoT group enjoyed similar fortunes, with a 33% jump in revenue, and PSG was up 4% for the year.

Though we tend not to focus too much on Intel’s future earnings forecasts, their predictions for Q1’2022 warrant a quick look. IDM 2.0 and other investments have been weighing on Intel’s profitability, and this continues to be reflected in Intel’s expectations for the current quarter. 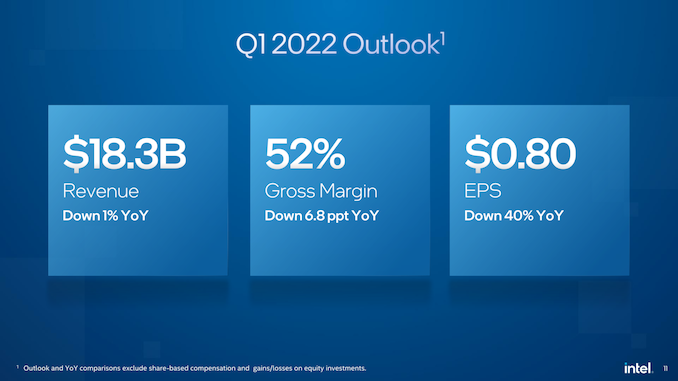 Meanwhile, in the company’s earnings announcement for the quarter and the associated earnings call, the company has offered a bit of insight into what to expect for products for the year.

First and foremost, Intel’s Arc discrete graphics products are now shipping to OEMs/ODMs, with over 50 design wins. Intel is committed to a Q1 launch for these products, though reading the tea leaves, it’s looking increasingly likely that they are going to opt for a mobile-first launch, meaning that our first look at Arc will be as part of an integrated system.

As for Intel’s data center efforts, the company is continuing to ship engineering samples of their forthcoming Sapphire Rapids CPUs to customers. The company’s most recent update to their launch schedule was released last summer, and calls for production to start this quarter and continue to ramp up for a launch in Q2. Thus far Intel has not changed this guidance, but it will be interesting to see if they can still hit those goals. Based on a comment from Intel’s earnings call – “They'll [AMD] provide the product, then we'll provide a product” – there is an implication that Sapphire Rapids may not ship until after AMD’s Genoa server processors.

Finally, this year continues to see Intel invest in new fab capacity. Just last week the company announced its new Ohio fab complex, which will start with 2 new leading-edge fabs and offers room for another 6. Intel expects to spend $20B on the first fabs, with total spending possibly approaching $100B if they build the rest. Combined with Intel’s other investments in Arizona, Oregon, Germany, and elsewhere, and the company is going to be spending 2022 doing a lot of building over the coming year.