Improving on the Cortex-X1 by switching to the Arm v9 architecture and increasing the core resources, both Arm and Qualcomm are keen to promote that the Cortex-X2 offers better performance and responsiveness than previous CPU cores. The small frequency bump from 2.85 GHz to 3.00 GHz will add some of that performance, however the question is always if the new manufacturing process coupled with the frequency increase allows for better power efficiency when running these workloads. Our standard analysis tool here is SPEC2017.

Running through some of these numbers, there are healthy gains to the core, and almost everything has a performance lift.

On the integer side (from 500.perlbench to 557.xr), there are good gains for gcc (+17%), mcf (+13%), xalancbmk (+13%), and leela (+14%), leading to an overall +8% improvement. Most of these integer tests involve cache movement and throughput, and usually gains in sub-tests like gcc can help a wide range of regular user workloads.

Looking at power and energy for the integer benchmarks, we’re seeing the X2 consume more instantaneous power on almost all the tests, but the efficiency is kicking in. That overall 8% performance gain is taking 5% less total energy, but on average requires 2% more peak power. 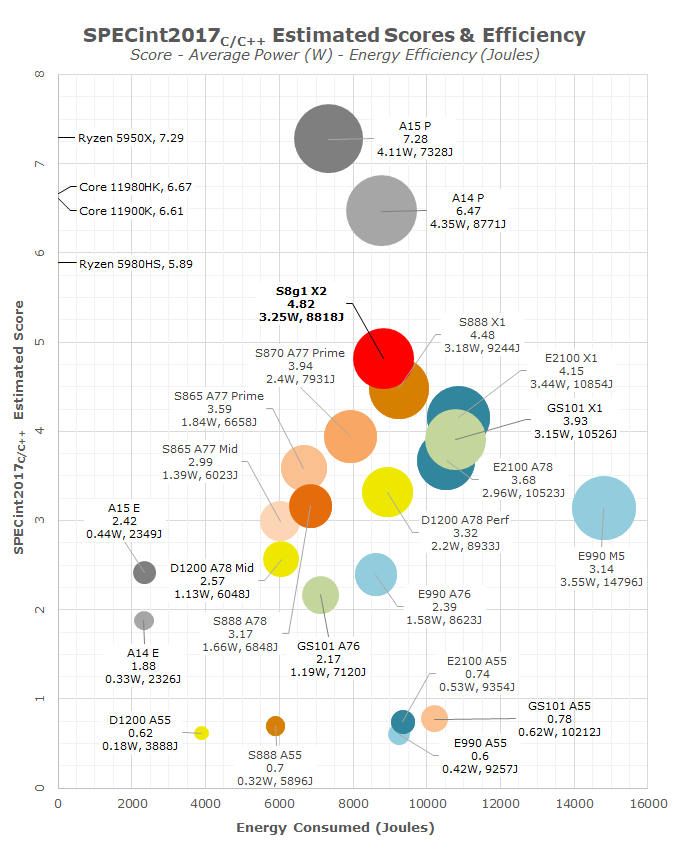 If we put this core up against all the other performance cores we test, we see that 8% jump in performance for 5% less energy used, and the X2 stands well above the X1 cores of the previous generation, especially those in non-Snapdragon processors. There is still a fundamental step needed to reach the Apple cores, even the previous-generation A14 performance core, which scores 34% higher for the same energy consumed (albeit on average another 34% peak power).

Just on these numbers, Qualcomm’s +20% performance or +30% efficiency doesn’t bare fruit, but the floating point numbers are significantly different.

Several benchmarks in 2017fp are substantially higher on the X2 this generation. +17% on namd for example would point to execution performance increases, but +28% in parest, +41% in lbm and +20% in blender showcases a mix of execution performance and memory performance. Overall we’re seeing +19% performance, which is nearer Qualcomm’s 20% mark. Note that this comes with an almost identical amount of energy consumed relative to the X1 core in the S888, with a difference of just 0.2%.

The major difference however is the average power consumed. For example, our biggest single test gain in 519.lbm is +41%, but where the S888 averages 4.49 watts, the new X2 core averages 7.62 watts.  That’s a 70% increase in instantaneous power consumer, and realistically no single core in a modern smartphone should draw that much power. The reason why the power goes this high is because lbm leverages the memory subsystem, especially that 6 MiB L3 cache and relies on the 4 MiB system level cache, all of which consumes power. Overall in the lbm test, the +41% performance costs +20% energy, so efficiency is still +16% in this test. Some of the other tests, such as parest and blender, also follow this pattern. 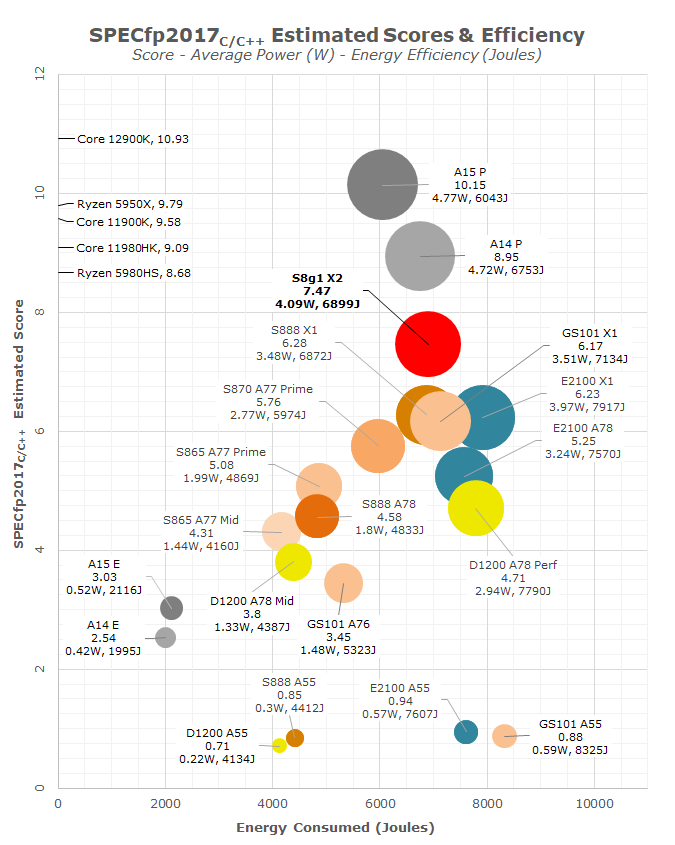 Comparing against the competition, the X2 core does make a better generation jump when it comes to floating point performance. It will be interesting to see how other processors enable the X2 core, especially MTK’s flagship at slightly higher frequency, on TSMC N4, but also if it has access to a full 14 MiB combination of caches as we suspect, that could bring the power draw during single core use a lot higher. It will be difficult to tease out exactly who wins what where based on implementation vs. process node, but it will be a fun comparison to make when we look purely at the X2 vs. X2 cores.