Continuing our earnings season coverage for Q3’21, today we have the yin to Intel’s yang, AMD. The number-two x86 chip and discrete GPU maker has been enjoying explosive growth ever since AMD kicked off its renaissance of sorts a couple of years ago, and that trend has been continuing unabated – AMD is now pulling in more revenue in a single quarter than they did in all of 2016. Consequently, AMD has been setting various records for several quarters now, and their latest quarter is no exception, with AMD setting new high water marks for revenue and profitability.

For the third quarter of 2021, AMD reported $4.3B in revenue, making a massive 54% jump over a year-ago quarter for AMD, when the company made just $2.8B in a then-record quarter. That makes Q3’21 both the best Q3 and the best quarter ever for the company, continuing a trend that has seen the company’s revenue grow for the last 6 quarters straight – and this despite a pandemic and seasonal fluctuations.

As always, AMD’s growing revenues have paid off handsomely for the company’s profitability. For the quarter, the company booked $923M in net income – coming within striking distance of their first $1B-in-profit quarter. This is a 137% increase over the year-ago quarter, underscoring how AMD’s profitability has been growing even faster than their rapidly rising revenues. Helping AMD out has been a strong gross margin for the company, which has been holding at 48% over the last two quarters.

Breaking down AMD’s results by segment, we start with Computing and Graphics, which encompasses their desktop and notebook CPU sales, as well as their GPU sales. That division booked $2.4B in revenue for the quarter, $731M (44%) more than Q2 2021. Accordingly, the segment’s operating income is up quite a bit as well, going from $384M a year ago to $513M this year. Though, in a mild surprise, it is down on a quarterly basis, which AMD is ascribing to higher operating expenses.

As always, AMD doesn’t provide a detailed breakout of information from this segment, but they have provided some selective information on revenue and average selling prices (ASPs). Overall, client CPU sales have remained strong; client CPU ASPs are up on both a quarterly and yearly basis, indicating that AMD has been selling a larger share of high-end (high-margin) parts – or as AMD likes to call it, a “richer mix of Ryzen processor sales”. For their earnings release AMD isn’t offering much commentary on laptop versus desktop sales, but it’s noteworthy that the bulk of the company’s new consumer product releases in the quarter were desktop-focused, with the Radeon RX 6600 XT and Ryzen 5000G-series APUs. 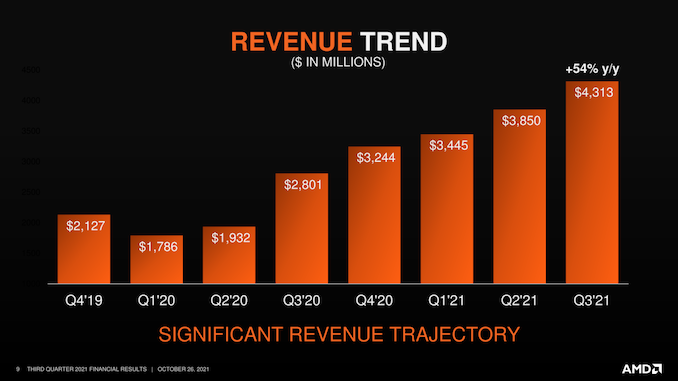 Speaking of GPUs, AMD’s graphics and compute processor business is booming as well. As with CPUs, ASPs for AMD’s GPU business as up on both a yearly and quarterly basis, with graphics revenue more than doubling over the year-ago quarter. According to the company this is being driven by both high-end Radeon sales as well as AMD Instinct sales, with data center graphics revenue more than doubling on both a yearly and quarterly basis. AMD began shipping their first CDNA2-based accelerators in Q2, so for Q3 AMD has been enjoying that ramp-up as they ship out the high-margin chips for the Frontier supercomputer.

Moving on, AMD’s Enterprise, Embedded, and Semi-Custom segment has yet again experienced a quarter of rapid growth, thanks to the success of AMD’s EPYC processors and demand for the 9th generation consoles. This segment of the company booked $1.9B in revenue, $781M (69%) more than what they pulled in for Q3’20, and 20% ahead of an already impressive Q2’21. The gap between the CG and EESC groups has also further closed – the latter is now only behind AMD’s leading group by $483M in revenue.

And while AMD intentionally doesn’t separate server sales from console sales in their reporting here, the company has confirmed that both are up. AMD’s Milan server CPUs, which were launched earlier this quarter, have become the majority of AMD’s server revenue, pushing them to their 6th straight quarter of record server processor revenue. And semi-custom revenue – which is primarily the game consoles – is up not only on a yearly basis, but on a quarterly basis as well, with AMD confirming that they have been able to further expand their console APU production. 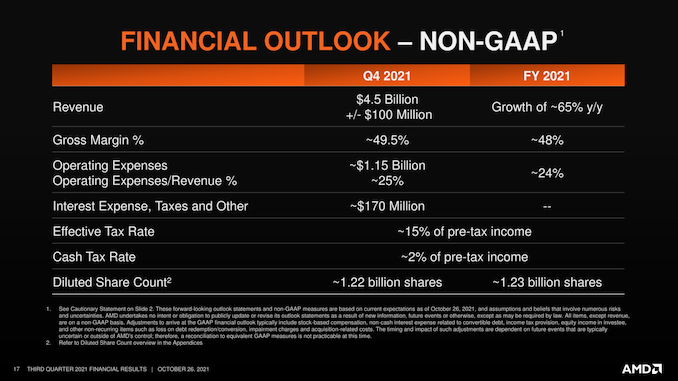 Looking forward, AMD’s expectations for the fourth quarter and for the rest of the year have been bumped up yet again. For Q4 the company expects to book a record $4.5B (+/- $100M) in revenue, which if it comes to pass will be 41% growth over Q4’20. AMD is also projecting a 49.5% gross margin for Q4, which if they exceed it even slightly, would be enough to push them to their first 50% gross margin quarter in company history. Meanwhile AMD’s full year 2021 projection now stands at a 65% year-over-year increase in revenue versus their $9.8B FY2020, which is 5 percentage points higher than their forecast from the end of Q2.

As for AMD’s ongoing Xilinx acquisition, while the company doesn’t have any major updates on the subject, they are confirming that they’re making “good progress” towards securing the necessary regulatory approvals. To that they, they are reiterating that it remains on-track to close by the end of this year.

Finally, taking a break from growing the company by 50% every year, AMD is scheduled to hold their AMD Accelerated Data Center Premiere event on Monday, November 8th. While AMD isn’t giving up too much information in advance, the company is confirming that we’ll hear more about their CDNA2 accelerator architecture, which along with the current Frontier supercomputer, will be going into their next generation Radeon Instinct products. As well, the company will also be delivering news on their EPYC server processors, which were just recently updated back in March with the launch of the 3rd generation Milan parts. As always, AnandTech will be virtually there, covering AMD’s announcements in detail, so be sure to drop by for that.