Needing no introduction, AMD this afternoon is the second of the PC chip titans to announce their earnings for the quarter and for the full 2020 calendar year. The company has continued to ride high on the success of its Zen architecture-based CPUs and APUs, as well as the recent launch of the Playstation 5 and Xbox Series X|S. As a result, these products have propelled AMD to another record quarter and another record year, as the company continues to hit revenue records while recording an increasingly tidy profit in the process.

Meanwhile, in what was already a strong quarter for the company, AMD also realized some one-off gains related to an income tax valuation allowance, which added another $1.3B to AMD’s net income. As a result, the company booked a massive profit of $1.78B for the quarter alone. Otherwise, excluding that one-off gain and looking at AMD’s non-GAAP results, the company still booked 66% more in net income in Q4’20 than they did the year-ago quarter. So not only is AMD pulling in record revenues for the quarter, but that is translating into much higher profits as well.

As for AMD’s full-year earnings, the company has been having strong quarters all year now, so unsurprisingly this is reflected in their full-year results. Overall, for 2020 AMD booked $9.76B in revenue, which was an increase of 45% over 2019, and once again a record for the company. Amusingly, AMD’s gross margin for the entire year was also 45%, which is one percentage point higher than 2019’s. 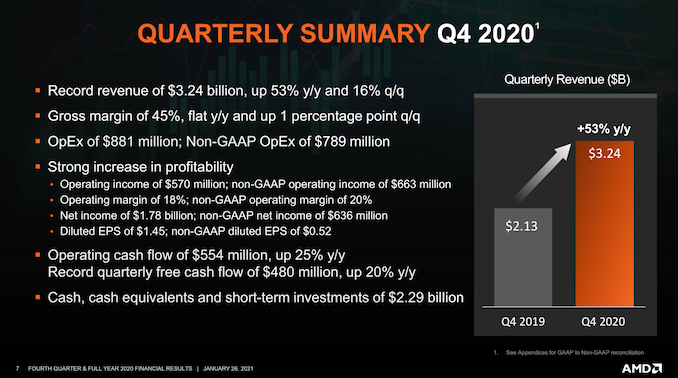 Like AMD’s quarterly results, their full-year results are also distorted a bit by their one-off tax benefit. By GAAP standards AMD booked an incredible $2.49B in net income for 2020. However removing that tax benefit brings their net income down to around $1.4B – or a non-GAAP $1.56B – which is still a huge year-over-year increase in profitability for the company, more than doubling their 2019 non-GAAP performance. Despite AMD’s gross margin only improving by a single point, AMD is increasingly enjoying the benefits of scale, with record-breaking product shipments turning into profits for the company.

Moving on to individual reporting segments, 2020 marks an interesting year for AMD given the company’s unusual split into two major segments. Normally AMD’s Compute and Graphics segment is by far and away the flag bearer for the company’s earnings, but the launch of the latest generation of consoles, combined with ever-improving EPYC sales, means that the Enterprise, Embedded and Semi-Custom segment also saw a very strong quarter. 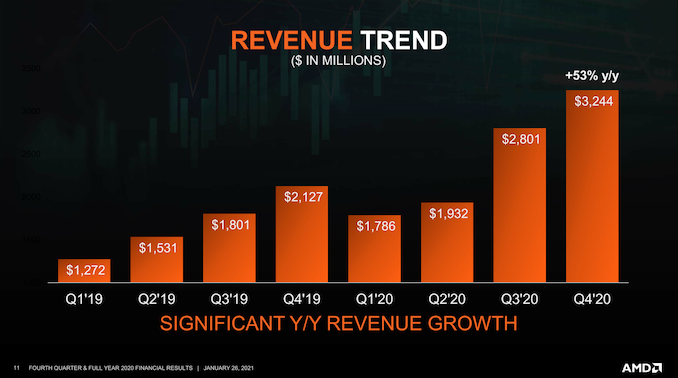 For Q4’20, AMD’s Computing and Graphics segment booked $1.96B in revenue, an 18% improvement over the year-ago quarter. According to the company, the biggest contributor to the increase here is strong sales of Ryzen processors. AMD does not break down the numbers by chip sales volumes, but Ryzen chip average selling prices (ASPs) themselves were actually down year-over-year, which AMD attributes to increased (and record) Ryzen mobile sales. The recent release of AMD’s Ryzen 5000 desktop CPUs did bring up ASPs on a quarterly basis, but Ryzen 5000 CPUs as a small piece of a larger whole, especially as they remain in short supply.

As for AMD’s GPU operations, the company reports that Radeon ASPs increased year-over-year and quarter-over-quarter, thanks to the recent launch of the Radeon RX 6000 series. Perhaps tellingly, the company is not offering any volume comparisons on a year-over-year basis, a likely indicator that AMD’s GPU sales are getting throttled by their supply constraints, especially as the company continues to ramp up the RX 6000 family.

Meanwhile, AMD’s Enterprise, Embedded and Semi-Custom segment booked $1.28B in revenue for the quarter. The 176% year-over-year increase in revenue was driven by a mix of both improved EPYC sales, and of course the launch of the latest-generation gaming consoles. Unfortunately AMD doesn’t break down how much each of these product groups contributed, so it’s hard to say how much of this growth is the EPYC side of matters as opposed to the more irregular game console revenue. At any rate, according to AMD Q4 of 2020 was another record quarter on the server side of matters, with AMD recording record server revenue thanks to continued cloud and enterprise sales growth. 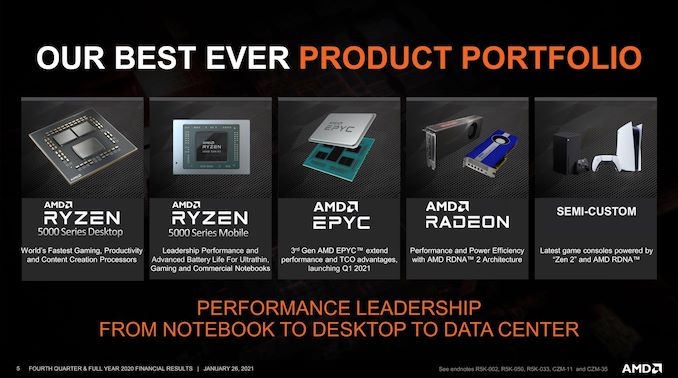 Looking forward, AMD is expecting a very promising first quarter of 2021 and beyond, albeit with expectations tempered by ongoing supply shortages. At this point the company has little trouble selling everything it can make, especially with the continued high demand for tech products spurred on by the pandemic. So a lot of what’s driving AMD’s future, especially over the next quarter or two, is based on just how many 7nm wafers the company can get out of TSMC. For that reason, AMD’s 2021 revenue forecast is relatively conservative for a growing AMD, as the company is projecting a 37% increase in non-GAAP revenue.

On the product side of matters, AMD will be enjoying a largely new and refreshed slate of product lines. The company’s Zen 3 architecture has begun shipping in laptops in the form of the new Cezanne APU, and the EPYC Milan family of server CPUs is set to launch later in the quarter. On top of that, they have ongoing sales of their Ryzen 5000 desktop CPUs, as well as the continued ramp-up and further releases of Radeon RX 6000 (RDNA2) GPUs, with new desktop and mobile parts expected in the first half of this year. Consequently, AMD is expecting a good year across all of its product lines, with all of its product lines expecting to see further growth. 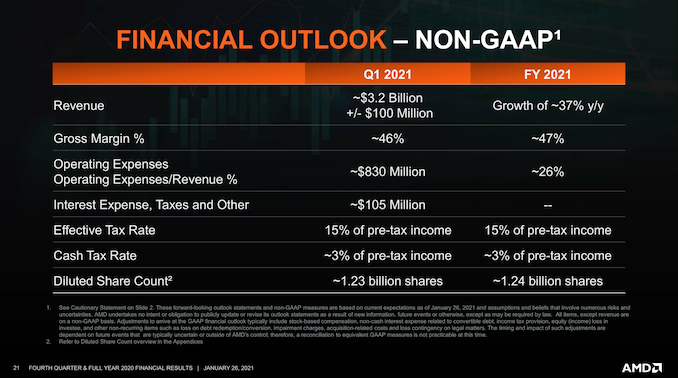