For our main tests, there are areas to consider to determine if these AMD Ryzen 4000 Desktop APUs are good for the expected market, and can claim the title as the best processors with integrated graphics.

When comparing these APUs against entry level graphics, the usual consideration is for combined price comparison – what would be the equivalent CPU+GPU combo in price against the integrated graphics solution.

Please note that some of this data includes notebook data, which was obtained during the loan period for that device. As a result, not all systems were tested on all benchmarks, depending on when the benchmarks were added to our testing (or were available at the time).

Chernobylite is an indie title that plays on a science-fiction survival horror experience and uses a 3D-scanned recreation of the real Chernobyl Exclusion Zone. It involves challenging combat, a mix of free exploration with crafting and non-linear story telling. While still in early access, it is already picking up plenty of awards. 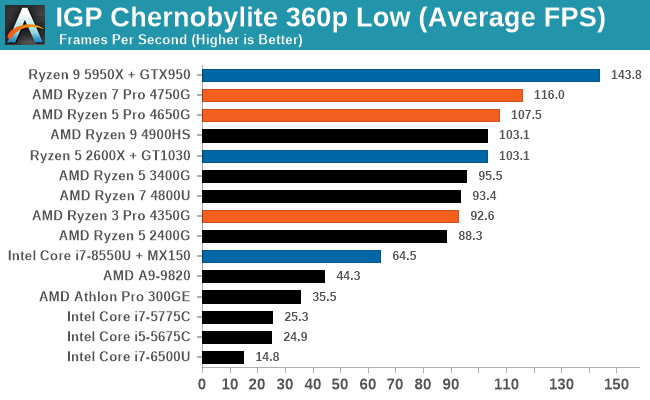 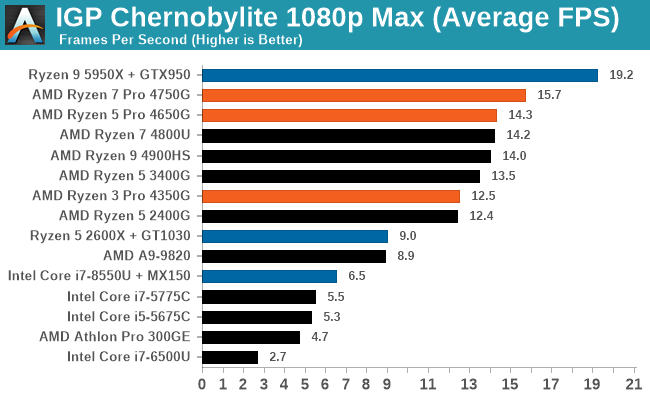 The GT1030 solution is in the ballpark for the low resolution setting, but falls behind when we crank it up. The GTX950 solution is an easy win here.

Originally penned by Sid Meier and his team, the Civilization series of turn-based strategy games are a cult classic, and many an excuse for an all-nighter trying to get Gandhi to declare war on you due to an integer underflow. 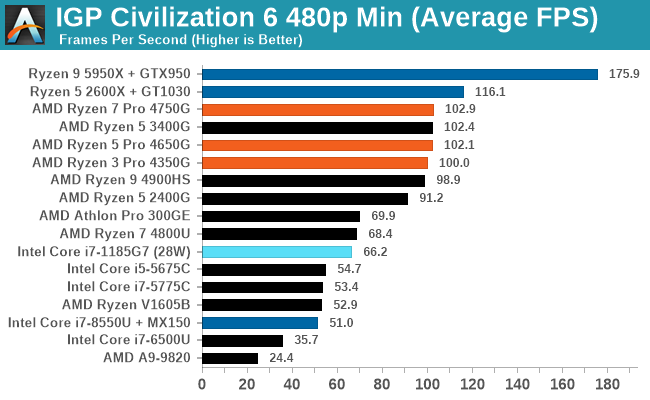 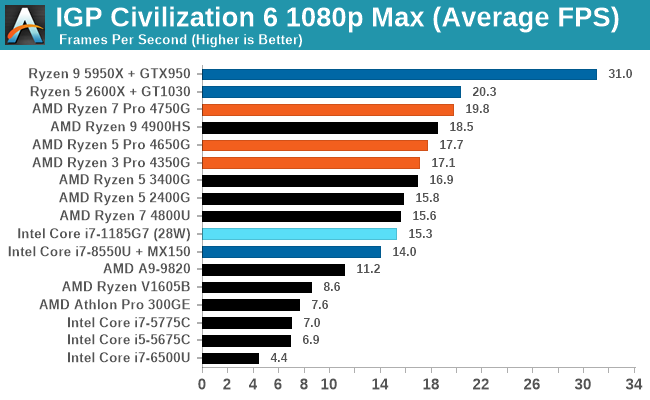 Both the discrete solutions win out for Civilization 6, but it is worth noting how much of a lead the AMD R4000 parts have over Tiger Lake. The Ryzen 4800U seems to fall behind the 65 W processors here, indicating that this is also a TDP heavy test.

Deus Ex:MD combines first-person, stealth, and role-playing elements, with the game set in Prague, dealing with themes of transhumanism, conspiracy theories, and a cyberpunk future. The game allows the player to select their own path (stealth, gun-toting maniac) and offers multiple solutions to its puzzles. 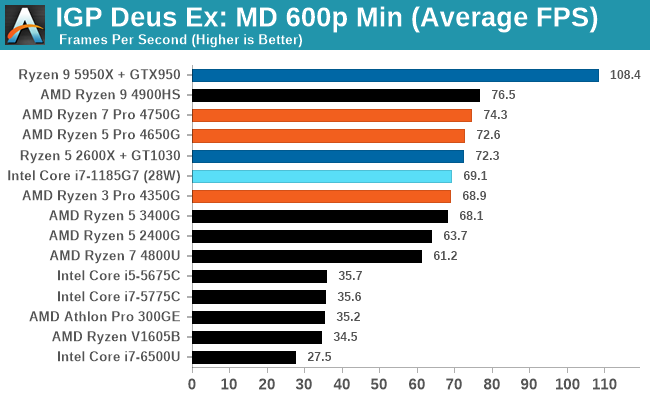 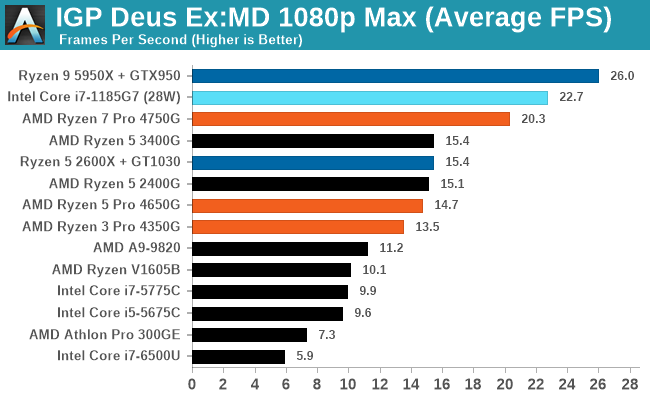 The GT1030 its more inbetween the APUs on DEMD, however the Tiger Lake processor does prefer the more complex test.

In 2019, FFXIV launched its Shadowbringers expansion, and an official standalone benchmark was released at the same time for users to understand what level of performance they could expect. Much like the FF15 benchmark we’ve been using for a while, this test is a long 7-minute scene of simulated gameplay within the title. There are a number of interesting graphical features, and it certainly looks more like a 2019 title than a 2010 release, which is when FF14 first came out. 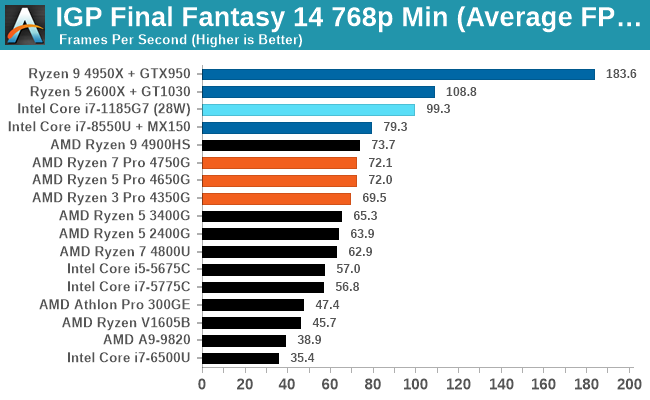 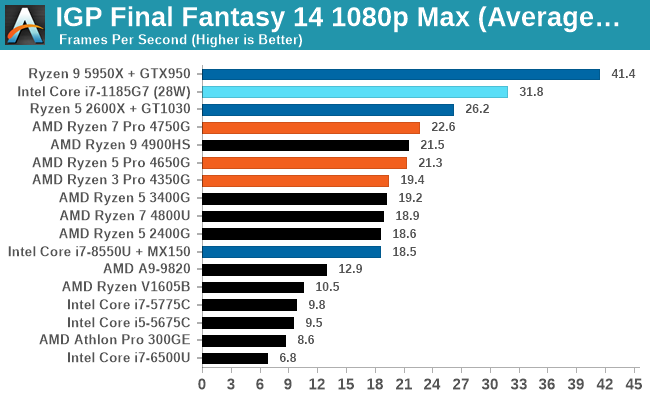 At the lower resolution, the discrete solutions certainly win out, along with Tiger Lake. When the detail is pushed higher, the MX150 falls behind the APUs, however the others stay ahead.

The game uses the internal Luminous Engine, and as with other Final Fantasy games, pushes the imagination of what we can do with the hardware underneath us. To that end, FFXV was one of the first games to promote the use of ‘video game landscape photography’, due in part to the extensive detail even at long range but also with the integration of NVIDIA’s Ansel software, that allowed for super-resolution imagery and post-processing effects to be applied. 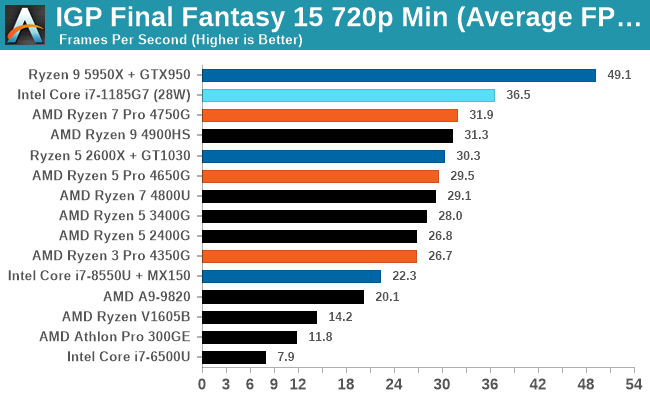 World of Tanks is set in the mid-20th century and allows players to take control of a range of military based armored vehicles. The game offers multiple entry points including a free-to-play element as well as allowing players to pay a fee to open up more features. 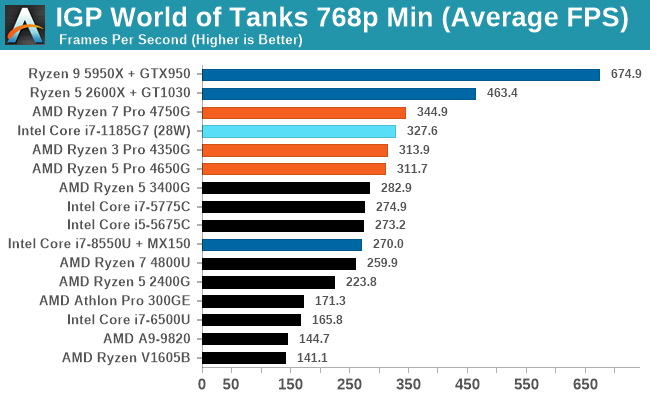 The fourth title of the franchise, Borderlands 3 expands the universe beyond Pandora and its orbit, with the set of heroes (plus those from previous games) now cruising the galaxy looking for vaults and the treasures within. Popular Characters like Tiny Tina, Claptrap, Lilith, Dr. Zed, Zer0, Tannis, and others all make appearances as the game continues its cel-shaded design but with the graphical fidelity turned up. 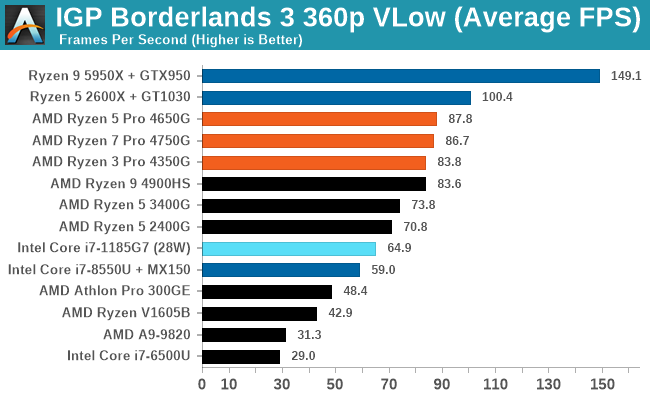 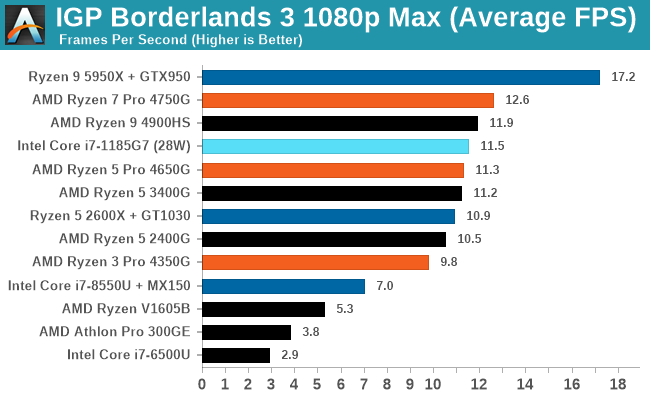 The Tiger Lake seems to have a bit of trouble on the lower resolution, with the Renoir APUs coming in strong, but still behind the desktop discrete solutions. The MX150 does relatively poorly here.

The 2019 edition of the game features all 21 circuits on the calendar for that year, and includes a range of retro models and DLC focusing on the careers of Alain Prost and Ayrton Senna. This edition revamps up the Career mode, with features such as in-season driver swaps coming into the mix, and the quality of the graphics this time around is also superb, even at 4K low or 1080p Ultra. 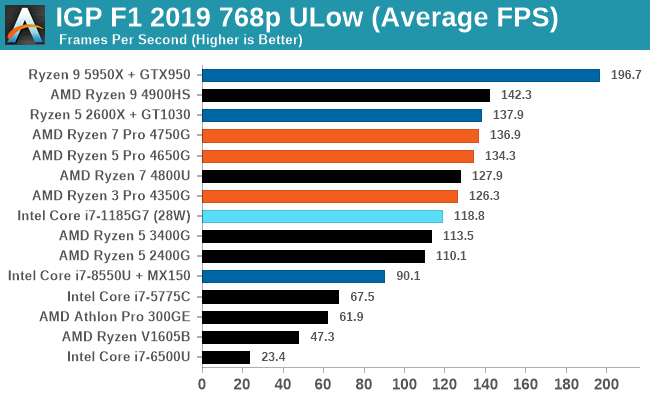 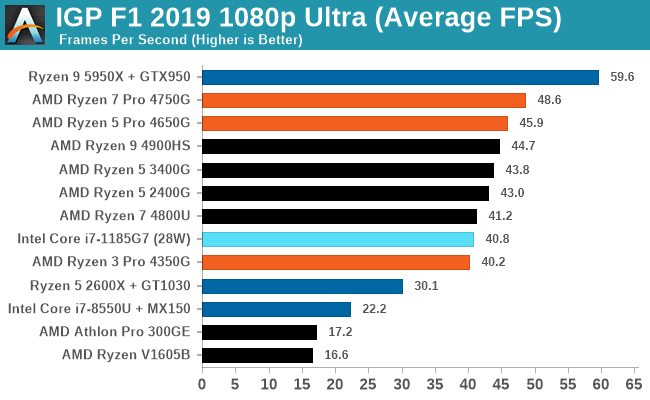 The fifth title in Ubisoft's Far Cry series lands us right into the unwelcoming arms of an armed militant cult in Montana, one of the many middles-of-nowhere in the United States. With a charismatic and enigmatic adversary, gorgeous landscapes of the northwestern American flavor, and lots of violence, it is classic Far Cry fare. Graphically intensive in an open-world environment, the game mixes in action and exploration with a lot of configurability. 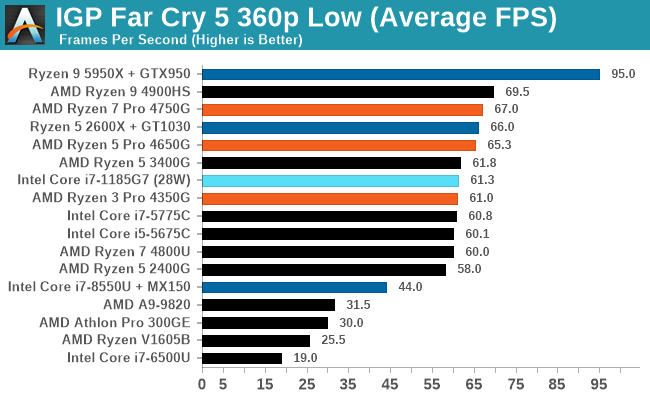 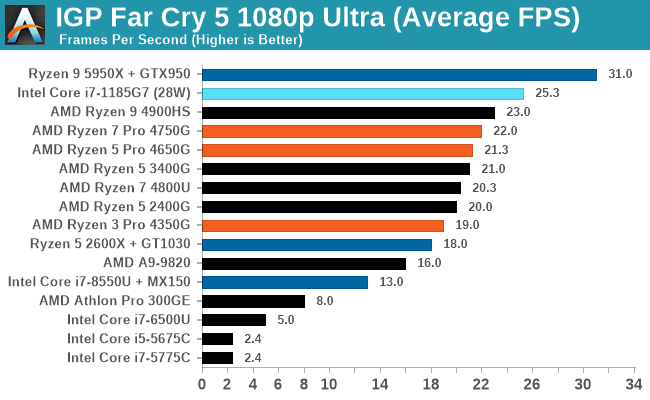 Strange Brigade is based in 1903’s Egypt, and follows a story which is very similar to that of the Mummy film franchise. This particular third-person shooter is developed by Rebellion Developments which is more widely known for games such as the Sniper Elite and Alien vs Predator series. The game follows the hunt for Seteki the Witch Queen, who has arose once again and the only ‘troop’ who can ultimately stop her. 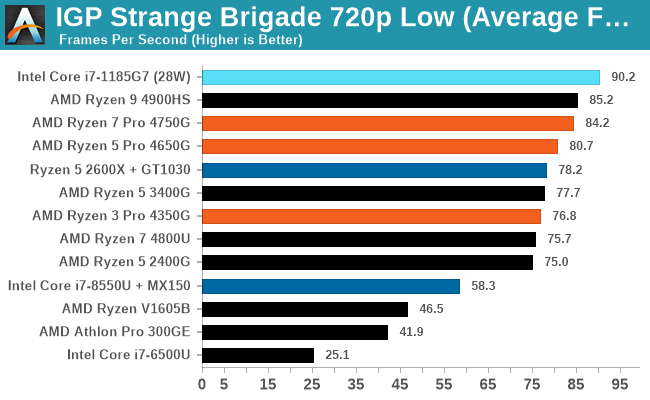 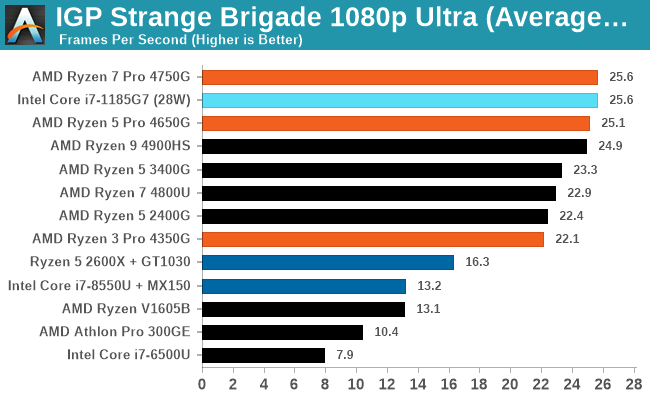