Back in February this year, we published an announcement that Huawei was planning on refreshing its Matebook X Pro for 2020. Following on from this, Huawei has announced that it is taking pre-orders on its new Matebook X Pro 2020 models, with both laptops featuring Intel's 10th Gen Comet Lake mobile processors. Available with either an Intel Core i5-10210U and Core i7-10510U processor, the Matebook X Pro features an LTPS 13.9-inch display with touchscreen capabilities. Further to this, Huawei has also announced the pre-order availability of its new Matebook 13 2020 model, which also benefits from Intel's 10th gen Comet Lake mobile processors, with a 512 GB PCIe SSD, and a 13 inch, 2160 x 1440 IPS panel. 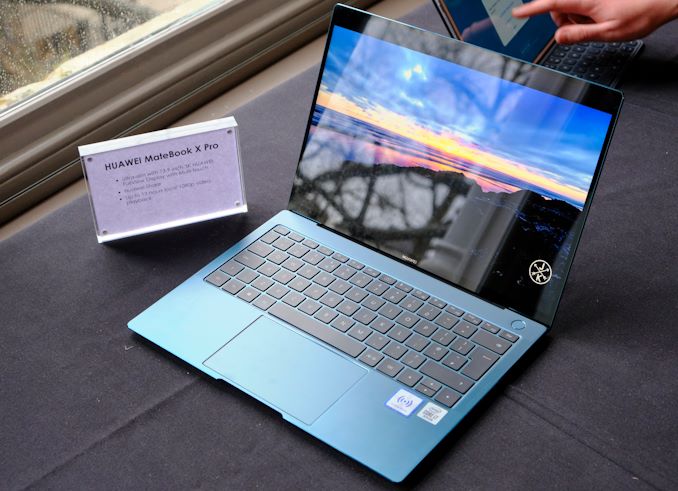 Featured across both of Huawei's new Matebook X Pro 2020 model is a 56 Wh lithium polymer battery which Huawei rates for up to 13 hours of local video playback. This includes a USB Type-C 65 W charging adapter. Also featured within the space grey aluminium alloy frame is a 1-megapixel recessed camera, a Wi-Fi 5 wireless interface with support for BT 5.0 devices, as well as a quad-speaker and microphone array for improved audio output and input quality. Each Matebook X Pro 2020 includes a single USB 3.0 Type-A, two USB 3.1 Type-C ports with support for charging, data transfer, and DisplayPort output capability, as well as a single 3.5 mm microphone and headphone combo jack.

Huawei has also announced two new Matebook 13 2020 models which feature differentiating characteristics to the Matebook X Pro 2020 pair, although it is available in both with an Intel Core i7-10510U and cheaper i5-10510U. Focusing on the higher-spec of the two Matebook's, it is shipped with 16 GB of LPDDR3-2133 memory, and a touchscreen 13 inch, 2160 x 1440 IPS display with a 3:2 aspect ratio, which is powered by NVIDIA's GeForce MX250. The lower-spec model has an i5-10510U processor, 8 GB of LPDDR3-2133 memory, and a standard 13 inches 2160 x 1440 IPS display. Both Huawei Matebook 13 2020 models share the same space grey aluminium alloy frame with a 512 GB PCIe SSD, two USB Type-C inputs with one support charging, a 1-megapixel front-facing webcam, dual speaker and microphones, with a single 3.5 mm headphone/combo jack for external audio peripherals.

Each model is only available in space grey at the moment, although Huawei has stated that they will be doing emerald green and mystic silver versions. At the time of writing, all of the new Matebook X Pro 2020 and Matebook 13 2020 models on the Hauwei store come with a choice of a free gift. This includes a MediaPad T5 tablet, FreeBuds3 wireless headphones, or a GT2e smartwatch.