This Smartphone Fingerprint Sensor Gets Two Thumbs (Up)

One of the cool features that came out of Qualcomm’s Tech Summit last month was its new fingerprint sensor. This one goes above and beyond anything I’ve seen before – where fingerprint sensors used to be small and have a sensing angle no bigger than a sesame seed, Qualcomm’s new 3D Sonic Max sensor is massive.

Most in-display detection areas are quite small, often smaller than an actual thumb. And thus when a person tries to unlock the smartphone, they have to guess as to exactly where the sensor is. Given that the sensor is several millimetres wide, by being off 2-3 mm means that the likelihood of a positive unlocking is down to the quality of the sensor and the software. Some smartphones with always-on displays get around this by offering up a fingerprint area to show where you have to press, but even then that only gets displayed after you’ve touched the display once. Overall we can all agree on one thing: in-display sensors are too small.

Now it should be noted that there are two types of in-display sensor: optical and ultrasonic. Optical sensors rely on light to bounce between the fingerprint and the sensor, and this is achieved often by brightening the screen when a finger press is detected. With the right combination of hardware and software, a device might even be able to start detecting when something is about to press the sensor and anticipate it. The other type of sensor is ultrasonic, which doesn’t need light but does require direct contact. This looks at the return pattern by using ultrasonic waves through to the finger. A number of previous ultrasonic sensors have claimed superior security due to this.

So what makes Qualcomm’s new 3D Sonic Max so different? Well it’s freaking huge. It’s big enough for two fill thumbs to be used for detection at the same time. 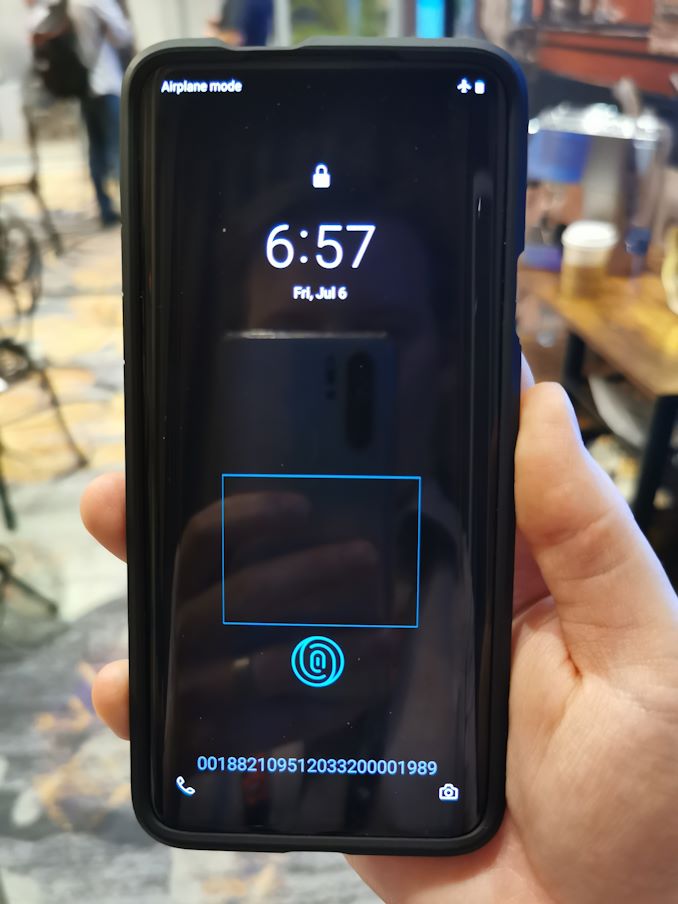 The sensor size on the previous model was 4mm x 9mm. This time it is 20mm x 30mm, a full 16x larger than before, and as you can see from the image above, the actual detection area is slightly larger than that due to the detection methodology. The sensor can operate in single finger detection mode, or dual finger detection mode, requiring both fingers to be present when unlocking a device (make sure you don’t lose a finger). This sensor gets rid of that ‘small sensor’ problem, as a fingerprint can be detected anywhere inside that box.

Qualcomm didn’t disclose if this new sensor would cost more than their old Sonic fingerprint sensor, but it likely does. I suspect that the optical sensor companies, who control most of the market at this point, will have to make something on a similar scale in order to compete, as undoubtedly there will be one smartphone vendor brave enough to use Qualcomm’s solution in 2020, surely. Qualcomm also stated that their solution works not only in smartphones, but can also be enabled for automotive based on its security credentials. This is the point where we start our vehicles by jabbing at a large screen with our fingerprint and the system can tell who is driving.