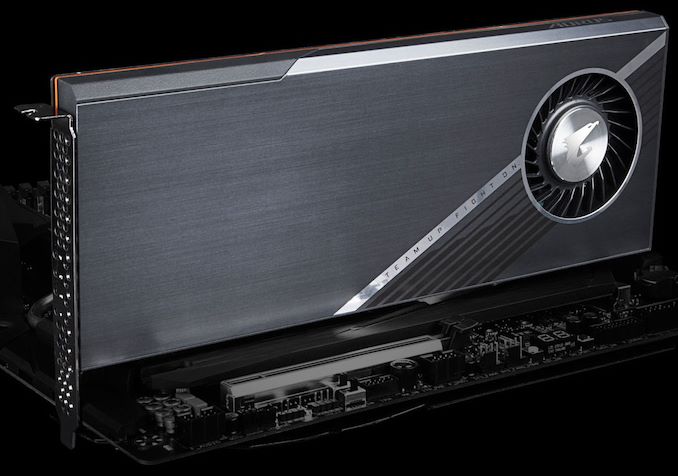 After originally showcasing it at Computex a bit earlier this year, GIGABYTE has officially introduced its quad-SSD PCIe 4.0 adapter card, the AORUS Gen4 AIC. Designed house up to 4 NVMe SSDs, the card is essentially a multi-way M.2 adapter, allowing a PCIe 4.0 x16 slot to be used to drive four x4 SSDs. Fittingly, with so many high-end SSDs on a single board, the card also features an active cooling system to ensure that the drives run at consistent speeds even under high loads. Fully populated with PCIe 4.0 SSDs, the card is rated to provide up to a staggering 15 GB/s of throughput – at least, if you can come up with a workload that can saturate such a setup.

GIGABYTE’s Aorus Gen4 AIC SSD 8 TB is a PCIe 4.0 x16 board with eight PCIe Gen 4 re-drivers. The card in turn carries four 2 TB M.2-2280 SSDs based on Phison’s PS5016-E16 controller, which remains the only client SSD controller with a PCIe 4.0 x4 interface. The card also features a sophisticated cooling system comprising of a large copper heatsink, a 5-cm ball bearing fan, and a baseplate, along with eight thermal sensors to monitor everything. That monitoring, in turn, is provided by the Aorus Storage Manager software, which can also configure the cooling on the card and supports three fan operating modes, including Silent, Balanced, and Performance. 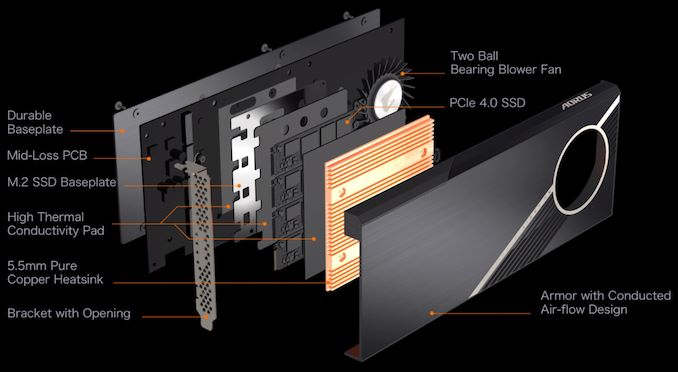 When running in RAID 0 mode, the Aorus Gen4 AIC SSD 8 TB offers up to 15 GB/s sequential read/write speeds, as well as 430K/440K read/write IOPS. It goes without saying that this is a throughput-focused card, as outside of the difficulty in even coming up with that many IOPS in a client workload, RAID modes don't really improve IOPS.

While the sequential performance of the Aorus Gen4 AIC SSD 8 TB looks extremely attractive, there is a caveat. The only enthusiast-class PCIe Gen 4-supporting platform today is AMD’s Ryzen 3000, and these CPUs only support 24 PCIe 4.0 lanes: x16 for an add-in-card, x4 for an NVMe SSD, and x4 to connect to the chipset. As a result, to make full use of the card you have to give up a board's sole PCIe 4.0 x16 slot for the SSD, which makes this a niche product for systems that don't need a powerful dGPU. Otherwise, installing the drive into a PCIe x16 slot controlled by AMD’s X570 chipset would cause it to be bottlenecked by the PCIe 4.0 x4 link between the chipset and the CPU.

That said, the Aorus Gen4 AIC SSD 8 TB can show itself in all the glory either in a workstation based on AMD’s EPYC 7000-series processor with up to 128 PCIe Gen 4 lanes, or, presumably, in a future high-end desktop based on next-generation AMD Threadripper CPU.