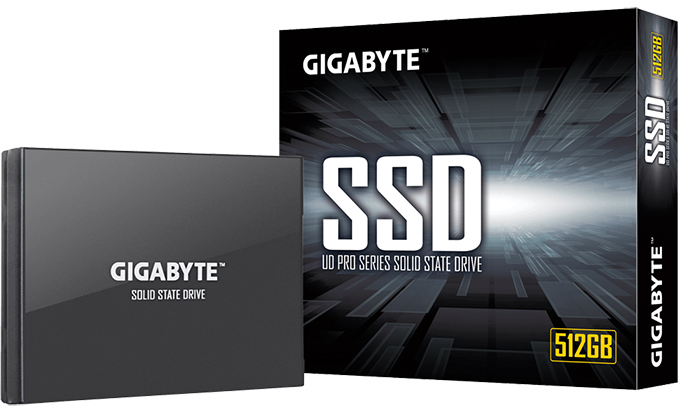 Despite growing demand for SSDs in the recent years, the four leading makers of motherboards have largely stayed out of this market, despite the significant leverage they normally have with commodity products. However after all of this time, GIGABYTE has decided to try its luck and added two SSDs to its lineup of products. The UD PRO-series drives are aimed at entry-level gaming systems, which continues to be the fastest growing segment of the SSD market.

For its first SSDs, GIGABYTE decided to go with a turnkey solution by Phison and Toshiba. The UD PRO-series drives are based on Phison’s PS3110 S10 controller as well as Toshiba’s BICS3 3D TLC NAND memory, a combination introduced by Phison late last year. GIGABYTE’s UD PRO lineup consists of only two models featuring 256 GB and 512 GB configurations (no, GIGABYTE does not offer gigabyte SSDs just now) as well as a SATA 6 Gb/s interface. From performance point of view, GIGABYTE’s UD PRO lineup does not offer anything special. The manufacturer declares up to 530 MB/s sequential read speed and up to 500 MB/s sequential write speed. Meanwhile random performance is up to 80K read IOPS and up to 75K write IOPS.

From reliability point of view, the UD PRO SSDs from GIGABYTE are speced for 100 TBW (256 GB SKU) and 200 TBW (512 GB SKU), which is 33% below other entry-level drives based on 3D TLC memory, a direct consequence of BCH-based ECC and insufficient overprovisioning. The drives are rated for 1.8 million hours MTBF (again, a bit lower than competing products) and are covered with a three-year warranty (vs. five years in case of other drives).

Although not published on their website, GIGABYTE has announced that they are pricing the drives at $68.99 and $119.99 for the 256GB and 512GB models respectively. This works out to a bit over $0.23/GB for storage, and makes it comparable in price to market leaders such as Crucial's MX500. In the meantime, the company expects the new drives to start showing up at retailers next week.

Finally, GIGABYTE's announcement for the UD PRO series also confirms that the company will be releasing additional drives in the future, including NVMe-based M.2 drives and a PCIe card. Both of these drives will be under the AORUS brand, and presumably will be focused at a higher performance segment of the market.