Thirty-two high-IPC cores in one package sounds promising. But how does the best ThunderX2 compare to what AMD, Qualcomm and Intel have to offer? In the table below we compare the high level specifications of several top server SKUs.

Astute readers will quickly remark that Intel's top of the line CPU is the Xeon Platinum 8180. However that SKU with its 205W TDP and $10k+ price tage is not comparable at all to any CPU in the list. We are already going out on a limb by including the 8176, which we feel belongs in this list of maximum core/thread count SKUs. In fact, as we will see further, Cavium positions the Cavium 9980 as "comparable" to the Xeon Platinum 8164, which is essentially the same part as the 8176 but with slightly lower clockspeeds.

However, it terms of performance per dollar, Cavium typically compares their flagship 9980 to the Intel Xeon Gold 6148, against which the pricing of Cavium's CPU is very aggressive. Many of Cavium's benchmarks claim that the fastest ThunderX2 is 30% to 40% ahead of the Xeon 6148, all the while Cavium's offering comes in at $1300 less. That aggressive pricing might explain the increasingly persistent rumors that Qualcomm is not going to enter the server market after all.

When looking at the table above, you can already see some important differences between the contenders. Intel seems to have the most advanced core topology and the highest turbo clockspeed. Meanwhile Qualcomm has the best chances when it comes to performance per watt, and has already published some benchmarking data that underlines this advantage. 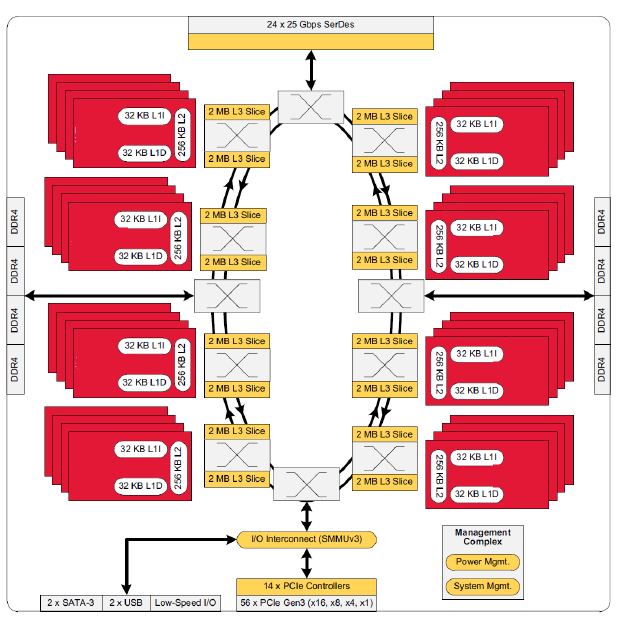 Similar to AMD's EPYC, Cavium's ThunderX2 is likely to shine in the "sparse matrix" HPC market. This is thanks to its 33% greater theoretical memory bandwidth and a high core/thread count. However as we've seen in the case of AMD's design, EPYC's L3-cache is slow once you need data that is not in the local 8 MB cache slice. The ThunderX2, by comparison, is a lot more sophisticated with a dual ring architecture, which seems to be similar to the ring architecture of the Xeon v4 (Broadwell-EP). According to Cavium, this ring structure is able to offer up to 6 TB/s of bandwidth and is non-blocking.

This ring architecture is connected to Cavium's Coherent Processor Interconnect (CCPI2 - at the top of the picture), which runs at 600 Gb/sec. This interconnect links the two sockets/NUMA nodes. Also connected to the ring are the SoC's 56 PCIe 3.0 lanes, which Cavium allocates among 14 PCIe "controllers.". These 14 controllers can, in turn, be bifurcated down to x4 or x1 as you can see below. 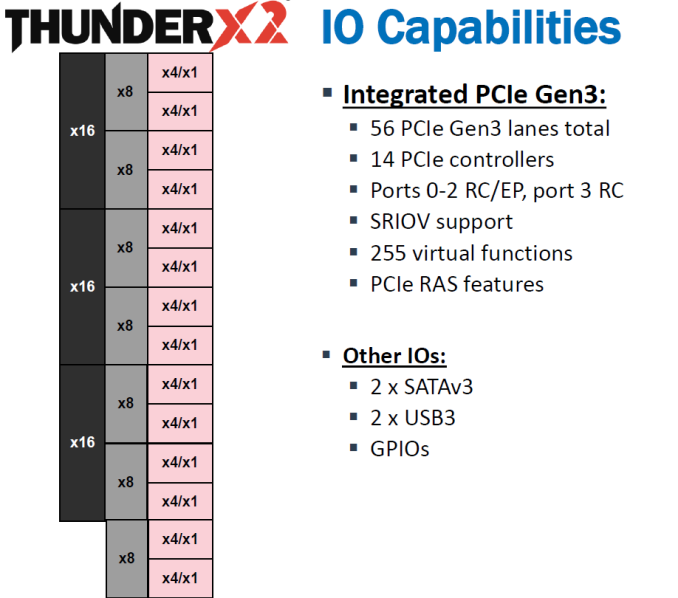 SR-IOV, which is important for I/O virtualization (Xen and KVM), is also supported.