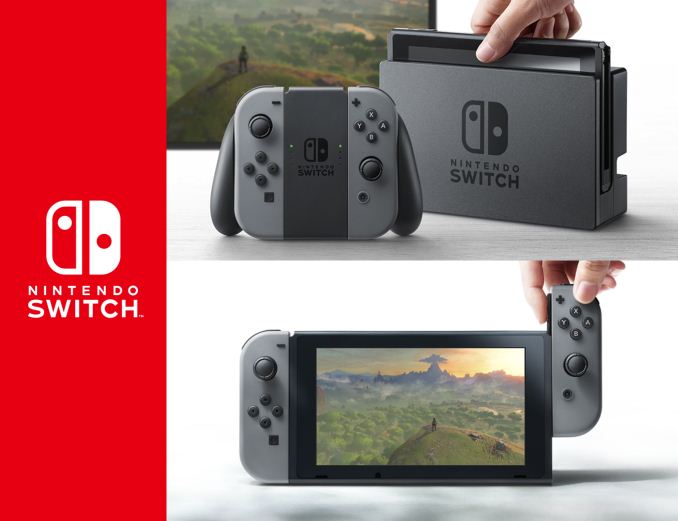 This morning in Tokyo, Nintendo held their long-awaited full product launch briefing for their upcoming console, the Nintendo Switch. Previously unveiled back in October of 2016, Nintendo has been keeping a fairly tight lid on specific details about the console, including its specifications, capabilities, and software lineup. Now with just less than 2 months to go until the console goes on sale, Nintendo is ramping up their promotional campaigns, releasing a good deal of new details on the console, though in a very Nintendo way.

Back when the Switch was unveiled, we learned that the handheld console would be powered by an NVIDIA SoC, NVIDIA’s first console win since 2006. At the time Nintendo and NVIDIA had been very quiet on the specifications of the SoC, and while the full specifications were certain to be off the table, I had been hoping that Nintendo would open up at least a bit more on the SoC. Unfortunately, in admittedly traditional Nintendo fashion, the company has skipped right past anything involving the SoC, and I suspect we’re going to be waiting for the console launch and full teardown before we get any more hard facts here.

For what it is worth, Eurogamer strongly believes that the underlying SoC is a Tegra X1 – NVIDIA’s 20nm Cortex-A57 CPU + Maxwell GPU SoC that’s also used in the NVIDIA SHIELD TV – and while I can’t confirm this at this time, for the moment I don’t have any reason to doubt their suspicions. Tegra X1 is ready and available in volume, and in this respect Nintendo has been conservative for quite some time. Still, it will be interesting to crack open the Switch in March to see if it’s actually Tegra X1 under the hood, or if it’s some sort of Nintendo-specific derivative.

Moving on to new information, while Nintendo held off on SoC information, they have published some new information on the console as a whole. As long suspected, the Switch features a 1280x720p capacitive touch screen LCD. Though lower in resolution than comparable phones and tablets, this is a logical fit for the console giving its performance characteristics, battery life needs, and cost concerns. Nintendo’s website does not specify the type of the underlying panel, though I will be surprised if it’s not IPS or *VA.

For storage, the console will feature expandable storage. 32GB (presumably eMMC) is built in to the console, while the console can be further expanded using microSDXC cards, similar to the current-generation 3DS consoles. And as revealed in Nintendo’s teaser video last year, there will also be a separate game card slot for games released on physical media. 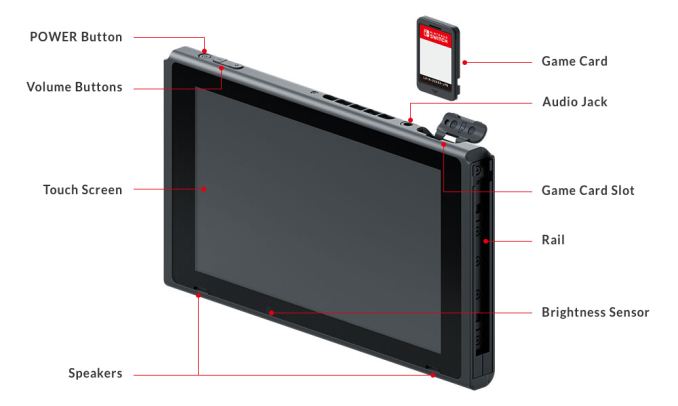 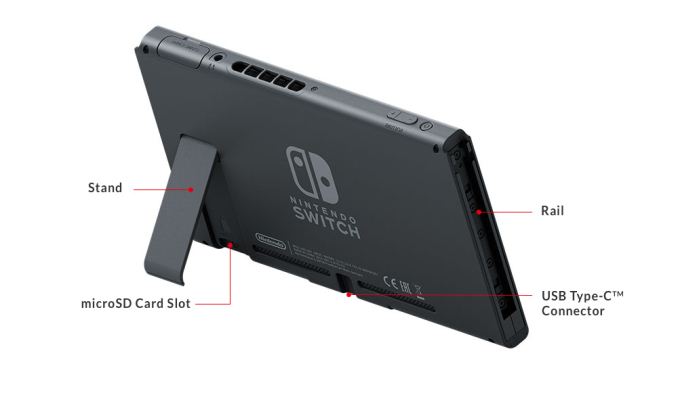 Meanwhile Nintendo isn’t being quite as forthcoming on the underlying specifications of the console’s integrated battery, but they are providing some ballpark power figures. The Switch is rated to last between 2.5 and 6.5 hours on a single charge, depending on the game, with the forthcoming Zelda game said to run for 3 hours. This is roughly comparable to the New Nintendo 3DS XL, which is rated for 3.5 to 6 hours, with the Switch having a slightly wider range (ed: though well short of the DS Lite’s 8+ hours). Still, for a long trip it’s clear you’ll need to bring some extra power.

The good news here is that for the Switch, Nintendo is giving up on proprietary chargers and power connectors. The Switch will charge via a standard USB Type-C connection, so it’s possible to use USB power banks with the console. Though without more details on the battery it’s hard to say just how large of a power bank will be required; given the higher power consumption of a gaming console, I expect the Switch will need a larger power bank than similarly sized tablets (perhaps something iPad Pro-sized). The Switch will also come with an AC adapter (curiously, with a hardwired cable), a welcome change after Nintendo didn’t include a power adapter with the New Nintendo 3DS. 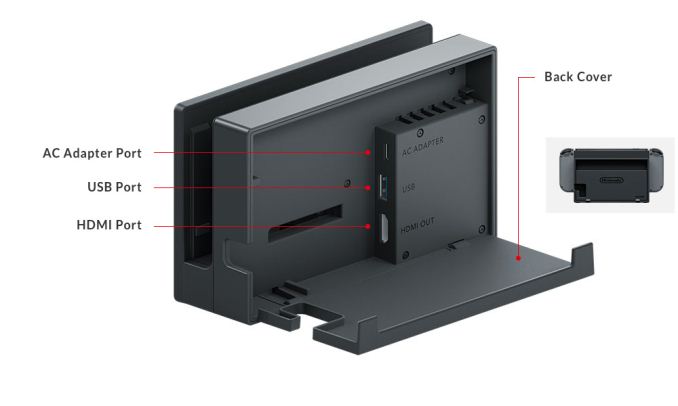 As for the Switch’s companion dock, Nintendo has previously confirmed that it would largely be a “dumb” device. That said, today’s unveiling does confirm that it includes a single USB 3.0 Type-A port and a pair of USB 2.0 ports, the former presumably using two SuperSpeed lanes off of the Type-C connector, and the latter using the two USB 2.0 channels built-in to USB Type-C. Nintendo hasn’t officially announced any USB peripherals at this time – and it will be interesting to see what does arise, since this is a portable console – though a quick straw poll around here is that we’ll be disappointed if Nintendo doesn’t support the GameCube adapter for the obligatory Super Smash Bros. game.

As an aside, this hardware revelation also gives us just enough information to figure out how Nintendo is supplying HDMI out of the Dock. Since the Switch only offers USB Type-C connectivity, there isn’t a dedicated HDMI port/path coming out of the console. I had thought Nintendo might be using HDMI alt mode for USB-C, but the USB 3.0 port inside the dock rules that out since it consumes 2 of the 4 high speed lanes that HDMI alt mode needs. Instead Nintendo has to be using DisplayPort alt mode with 2 lanes, and then doing active conversion from that to HDMI. This handily explains why Eurogamer’s sources point to 1080p60/4Kp30 being the maximum output of the console – this being what 2 lanes of DisplayPort 1.2 can support – and it means that the Dock is not a dumb plastic shell, but rather has some basic, active electronics in it (it’s essentially Apple’s USB-C Digital AV dongle with some extra features). Though this does make me wonder whether the active conversion of video signals adds any appreciable input lag.

Otherwise, as far as hardware goes the bulk of Nintendo’s focus with respect to hardware has been on the console’s two detachable controllers, the Joy-Cons. Besides being the console’s primary control mechanism (ed: a tablet with buttons, thank you!), the Joy-Cons are actually a lot more sophisticated than Nintendo originally let on last year. In terms of controls, each Joy-Con features the previously depicted 4 face buttons, a large shoulder button, an analog stick; also confirmed today is that on the inside, rail edge of the Joy-Cons are a pair of smaller shoulder buttons for when a single Joy-Con is used as a controller. So the Joy-Cons are essentially miniature versions of the SNES controller with an analog stick in place of the D-Pad.

It’s what’s under the hood that’s particularly interesting though. As one might expect, Nintendo is sticking with motion controls. Each Joy-Con contains a gyroscope and set of accelerometers, making it roughly equivalent to the Wii remote with Motion Plus. 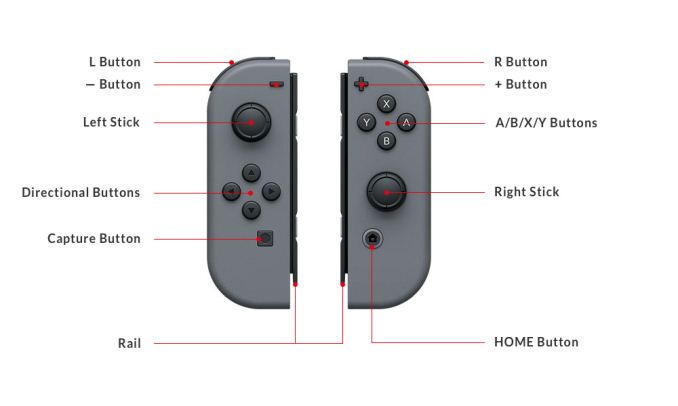 Beyond that, each Joy-Con features its own special set of features. The right Joy-Con contains an NFC reader/writer for use with Nintendo’s Amiibo figures, and what Nintendo is calling a "IR motion camera,” An IR camera would imply that it’s the same basic functionality as the Wii Remote, which used an IR camera to orient itself relative to the IR LEDs in the console’s sensor bar, however Nintendo also quickly demonstrated that the Joy-Con could measure distance and motion from a human hand facing the camera, something the Wii Remote could not do. Finally, the left Joy-Con contains what Nintendo is calling “HD rumble” functionality, their name for high fidelity rumbling. Given the diminutive size of the Joy-Con, coupled with Nintendo’s examples, I suspect that we’re looking at multiple linear actuators for vibration (similar to Apple’s Taptic Engine), as opposed to traditional motors. Not too surprisingly then, a second set of Joy-Cons won’t come cheap, with Nintendo listing the MSRP at $80.

Finally, taking a brief look at the software side, retailer pre-release information has unveiled that Switch games will go for $60. This is the same price as Wii U games and $20 higher than most 3DS games. The one bit of good news here is that Nintendo has done away with region locking, so it’s possible to buy and play games from any region. Launch day games will include the previously announced Zelda game, and Nintendo’s new mini-game collection, 1-2-Switch. 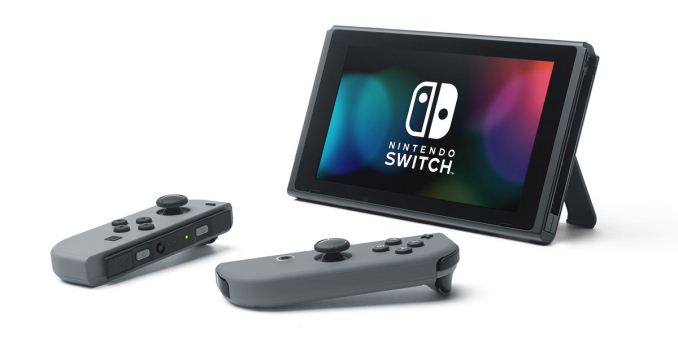 Wrapping things up, the Switch will be receiving a world-wide release on March 3rd (coincidentally the final day of the 2017 Game Developers Conference). It will be priced at $299 in the United States, with similar regional prices elsewhere across the globe. Ahead of the launch retailers have already put up pre-order pages (and some have started taking pre-orders), including Amazon, Best Buy, and GameStop.