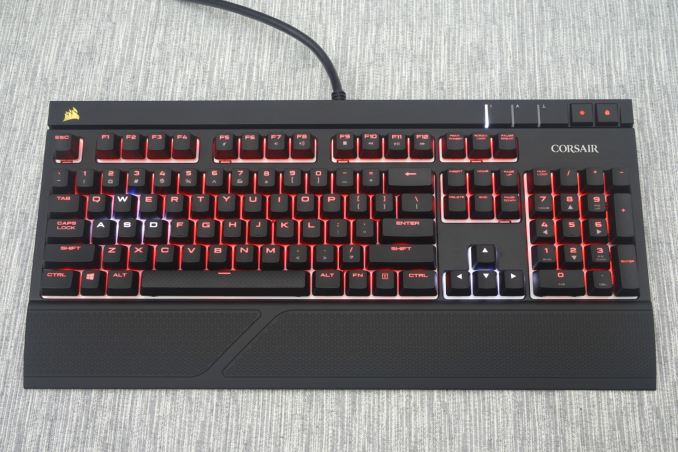 Cherry's MX Silent switches are making their debut on the Corsair Strafe RGB gaming mechanical keyboard. Corsair has the exclusive on the MX Silent for the first year, and in this review we are examining the quality and features of the Strafe RGB keyboard as well as the performance of the new switches.

Mechanical keyboards are now etched into the minds of PC enthusiasts, making the requested upgrade list alongside a specific mouse or headset. However, there are those who are reluctant because of the two major disadvantages of mechanical switches - price and noise.

Price is something we'll come onto, but noise is a particular problem for those who want to use them in working environments or have their home PC inside a shared living space, such as the living room or bedroom. Some aftermarket solutions have appeared, in the form of silicon O-rings and pads, to dampen the noise that mechanical keys do when bottoming down. However, a very large portion of the noise actually does not come from the key bottoming down but from the spring that quickly resets the key up to its original position, meaning that even with O-rings or pads installed beneath the keycaps, a mechanical keyboard could not ever become really quiet.

The growing adoption rate and sales of mechanical keyboards have given the manufacturers incentive to research and develop new products. Cherry, the original creator and patent holder of the keyboard mechanical switch, has created and patented "silent" versions of the MX mechanical switch. For the time being, only MX Red and MX Black switches are available as "silent" variants, which makes sense considering that the MX Blue switch is inherently noisy ("clicky"). Hopefully, silent versions of the popular MX Brown switch may appear in the future as well.

Cherry currently holds a deal with Corsair, giving them exclusive use of the Silent product range for the first year after their launch. Corsair has thus released a new version of the Strafe, their middle-range mechanical keyboard, including RGB lighting and the new silent version of the MX Red switch. The new MX Silent switches increased the MSRP of the keyboard by $20 ($170 instead of the $150 for the version with MX Blue switches). The increase in price may be why the company decided not to use them for the time being on the more expensive K70 RGB and K95 RGB models. $20 should be more than an acceptable price difference for those seeking a silent mechanical keyboard (and would spend them on O-rings or pads anyway, with perhaps questionable results). It will be interesting to see if the Cherry MX Silent switch can truly deliver over the self-customization route, and we will find out in this review.

The Strafe RGB comes in a well-designed, thick cardboard box. The artwork is based on a picture of the keyboard itself and has a black/yellow color theme, which is the "signature" livery of the Corsair Gaming brand. The use of Cherry's new MX Silent switches is very clearly noted on the front side of the box. 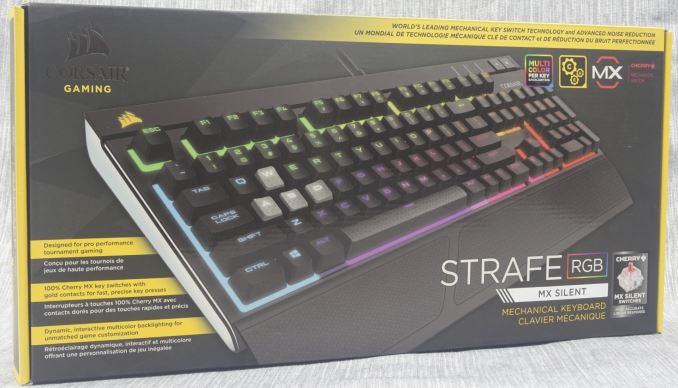 Alongside with the keyboard, Corsair supplies a very basic manual, a wrist rest, a keycap removal tool and two sets of gaming keycaps. The first set is supposed to be for FPS gamers and the second for MOBA gamers. Both sets are contoured and textured. Two keycaps, the W and the D, exist in both sets but have different contours as a result. The wrist rest was not included in the "vanilla" version of the Strafe that we reviewed last year, so it is a positive sign to see it included here.