Sponsored Post: Trying to Pick Out Your New RTX 40 Series GPU? ASUS Has Two Mighty Options For You

The NVIDIA GeForce RTX 40 series is here, and it’s ready to deliver you a substantial performance uplift in games, especially when real-time ray tracing is called for. But, picking out the model of RTX 4090 or 4080 you want is a weighty decision. ASUS has two models ready to go, though, with the ROG Strix GeForce RTX 4090 and 4080, and the TUF Gaming RTX 4090 and 4080, both of which come in standard and overclocked configurations.

The RTX 40 series is making a splash. The Ada Lovelace graphics architecture comes with a considerable performance leap over the previous-generation Ampere. That’s especially true with power efficiency, which has seen up to a 2x improvement.  While the GPU features more CUDA cores to power through traditional game rendering, the upgrades to its Tensor Cores and RT Cores deliver even greater improvements to some of the most modern games.

At up to 2x faster, ray tracing gets a serious speed up thanks to the GPUs' 3rd-gen RT Cores. AI performance gets a similar uplift from the 4th Gen Tensor Cores. The new Tensor cores also play a pivotal role in enabling DLSS 3.0, which can intelligently interpolate between rendered frames in real time to create new frames for super smooth visuals, even in CPU-bound scenarios.

Keeping all of that GPU power running is no simple task, but ASUS knows what it takes and has designed its graphics cards to be up to the task. 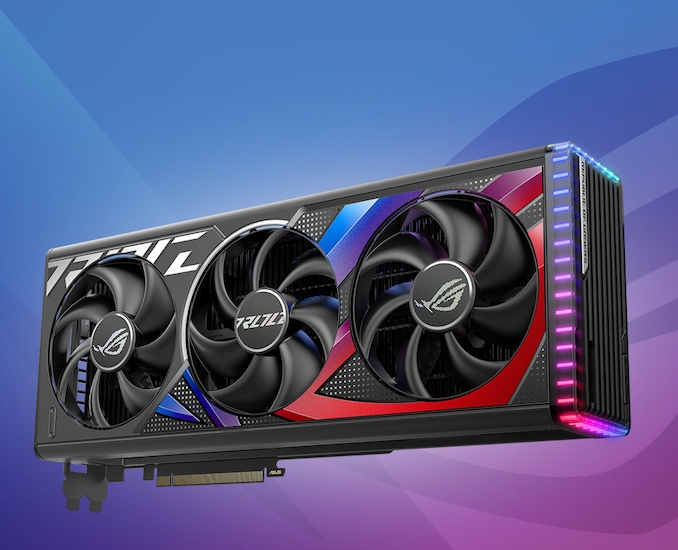 One key detail is keeping the GPU running cool enough to operate at its peak performance for as long as possible. To this end, ASUS has built a patented vapor chamber design and milled heat spreader into the ROG Strix models in order to effectively move heat away from the GPU. And by using a sizable 3.5-slot card design, ASUS has been able to pack in a massive heatsink and cooling fin array that can provide more surface area for the fans to move cool air through.

The TUF Gaming models are built with a die-cast shroud, frame, and backplate that are vented, improving airflow and heat dissipation while still providing a structurally rigid metal exoskeleton for the beefy graphics card.

Keeping the GPU running cool is one piece of the puzzle, but keeping it powered is another. In the ASUS ROG Strix graphics cards, ASUS uses digital power control and high-current power stages alongside 15K capacitors. The TUG Gaming models use military-grade capacitors rated to withstand 20,000 hours at 105 degrees Celsius. These ensure the GPU is fed consistent and clean power for sustained performance through demanding use cases.

If you’re not content with base performance levels, ASUS also includes GPU Tweak III software to let you tune your card and monitor its performance.

And, for ultra-clean aesthetics, ASUS offers a specialized THOR lineup of power supplies with the THOR 1200P2 specifically including native cabling to connect to the RTX 40 series without an adapter.

If you want to purchase these cards, you can find them on Newegg or MicroCenter in the US, and Canada Computers and Memory Express in Canada.