After the briefing, we were given a chance to benchmark a prototype Kaveri notebook for a few hours. That wasn't enough to run our full suite of laptop benchmarks, and battery testing in particular is something we couldn't perform. I did run some quick simulations of battery life; however, the prototype systems are optimized more for performance rather than power, so the results weren't really meaningful. We'll have to wait for retail laptops with Kaveri APUs before we can really see what sort of battery life to expect, but AMD claims there should be a decent jump in mobility compared to Richland.

The test systems were more of a proof of concept rather than anything you could actually sell. The keyboard was okay if a little mushy, but the touchpad in particular I found a bit lacking, and build quality was mediocre as well. The screens at least were good quality 1080p 15.6" touchscreen panels, and that was enough to get us benchmarking. I snapped a few pictures of the laptop that you can see above. In terms of other core specs, the laptop had 8GB of DDR3-1866 RAM and a Samsung M.2 256GB SSD.

For our purposes here, we're including the AMD Kaveri Prototype, AMD Trinity Prototype, and AMD Kabini Prototype laptops as a starting point. For retail laptops, we have the MSI GX60 with Richland A10-5750M APU (but only a single 8GB SO-DIMM, unfortunately), the Sony VAIO Pro 13 (i5-4200U), and the Acer V7-482PG (i7-4500U + GT 750M). The Acer is the only laptop equipped with a discrete GPU, so we wanted to see how Kaveri stacks up against such a system. You can compare additional results against Kaveri in Mobile Bench, of course.

Again, these numbers are only preliminary – the drivers for the GPU were slightly older (without Mantle support enabled yet), and there were occasions of odd behavior where other editors had scores that didn't match up with our results until after a reboot. We were not able to run each benchmark multiple times, so most of these results are from a single run. AMD is keen to talk about the GPU improvements with Kaveri, but I also wanted to see what has happened on the CPU side, so we'll start with our CPU/system benchmarks. 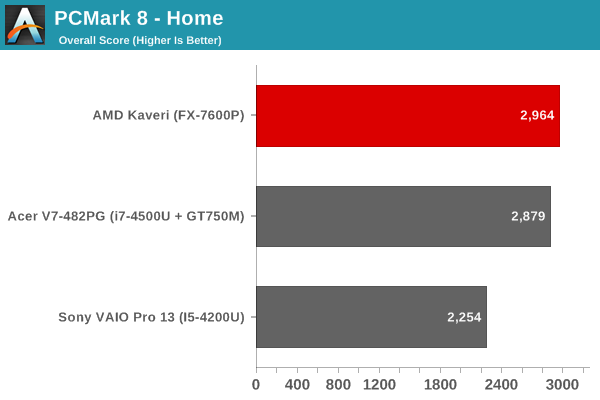 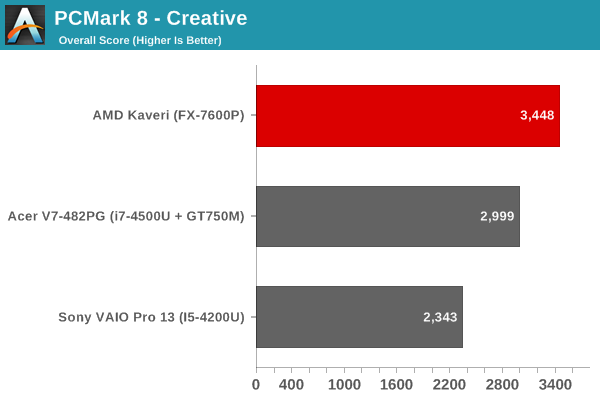 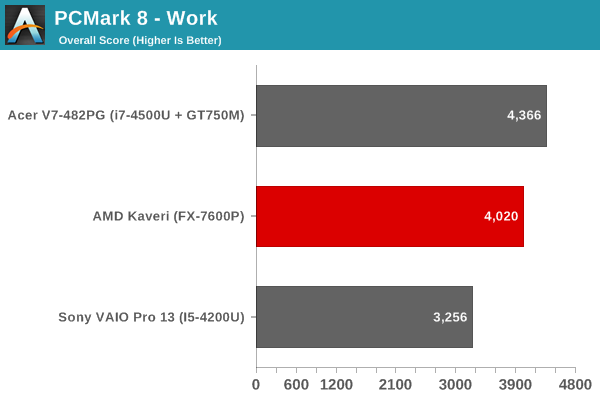 We don't have results for PCMark 8 for many of the systems, and the VAIO Pro 13 seems to be underperforming for some reason, but otherwise we get a pretty good idea of where things fall in terms of overall performance. Note that PCMark 8 is now OpenCL accelerated, which can improve performance quite a bit on AMD APUs. The result is that AMD actually takes the lead in the Home and Creative suites, but without more time benchmarking the system I wouldn't try to draw too many conclusions. Storage subsystem performance can still have an enormous impact on PCMark results, and the V7-482PG has to get by with an SSD caching solution. The VAIO Pro 13 on the other hand just seems to score a bit lower than I'd expect, so again take these scores with a grain of salt.

Moving on to other benchmarks, I also ran PCMark 7 as it doesn't have any OpenCL acceleration and will provide a better view of traditional application performance. Hopefully we'll continue to see improvements in the use of OpenCL (GPU) acceleration and over time PCMark 8 scores will be more indicative of real-world performance, but right now there are plenty of situations where having a GPU does very little for performance. 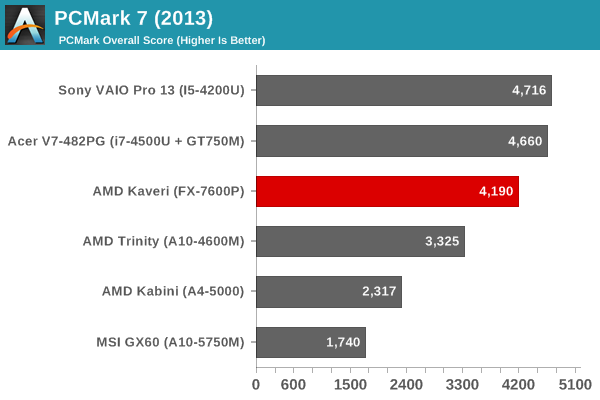 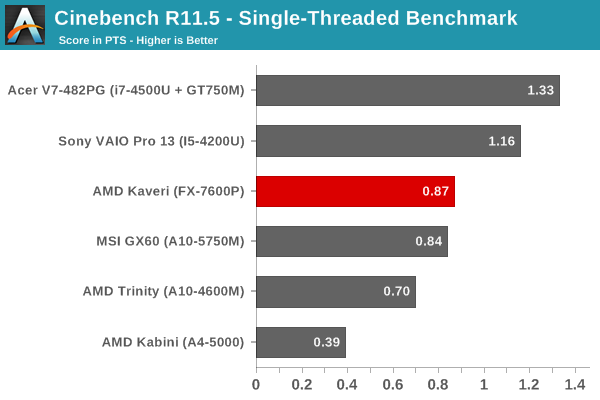 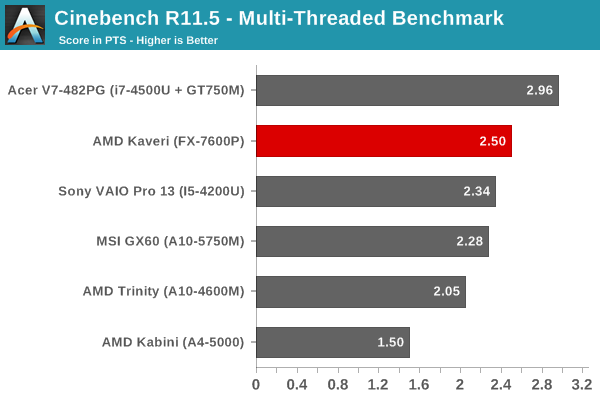 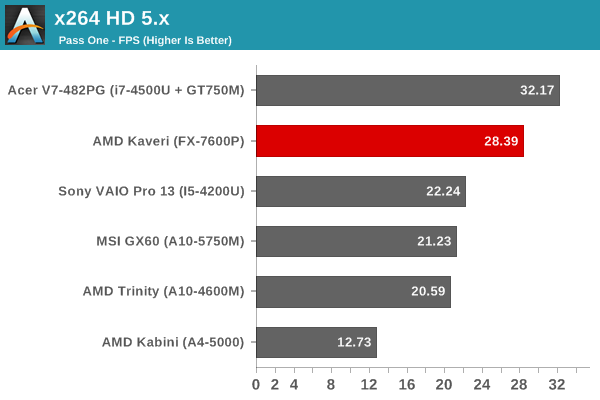 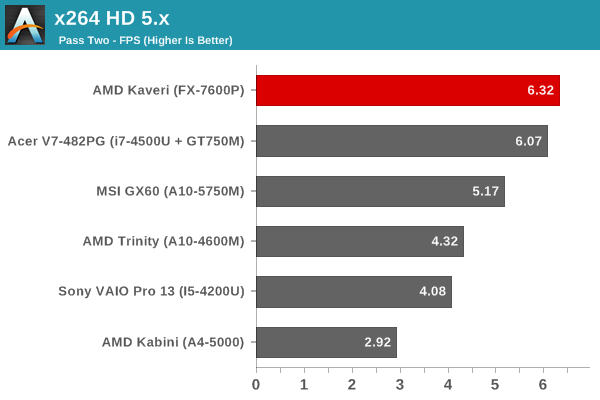 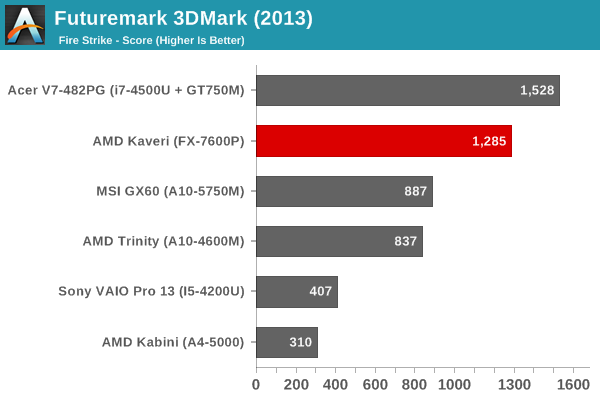 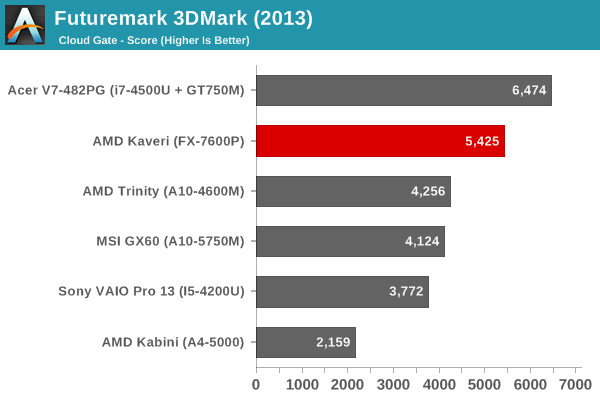 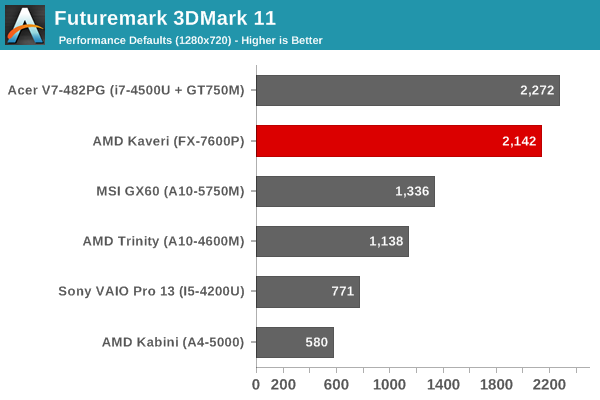 Somewhat surprisingly, Kaveri actually takes the lead in the very demanding second pass of the x264 HD 5.0 encoding test. Granted, we're looking at a 35W APU vs. 15W ULV CPU, and Intel's 37W quad-core parts would certainly retake the lead (and cost quite a bit more), but at least Kaveri is showing some real improvements over Richland in these tests. As noted above, PCMark 7 doesn't have any OpenCL optimizations so the gap between AMD and Intel is a bit wider.

Moving to the 3DMark results, Kaveri shows an impressive increase in performance over the Trinity/Richland GPU, which is expected. Intel's iGPU – particularly in the ULV system shown here – just doesn't stand a chance. While we are potentially TDP limited for the ULV Intel parts in graphics tests, my experience is that 3DMark hits the GPU much more than the CPU, so the GPU gets the lion's share of the TDP. I'll try to run some tests on other Haswell systems using the iGPU to verify the above results, but outside of the HD 5000 and Iris parts, I wouldn't expect Intel's iGPU to be too much faster than what we're seeing here.

Overall, an Intel CPU with a discrete GPU is still faster than Kaveri in most areas, and a quad-core i7-4702QM would really distance itself from AMD's Kaveri…but the quad-core i7 CPUs tend to start at around $350, so there's not much point in discussing that comparison. My personal feeling is that unless you're really pushing a laptop hard, most of the modern CPUs/APUs are plenty fast. I wouldn't want a Kabini APU, but Trinity/Richland, Ivy Bridge, Kaveri, and Haswell are all going to be fine for everyday use.

The more important element for me with a laptop (or desktop) is that I simply can't stand using conventional hard drives for the primary storage device any longer. Given the choice between an AMD Kaveri APU with a 256GB SSD (the Crucial MX100 is sure looking nice!) and pretty much any other laptop that has pure HDD storage, it's a no brainer for me. In fact, laptop manufacturers would do their customers a great service if they took the cost savings of AMD's APU vs. Intel's CPU and put that into a decent SSD solution rather than chasing the lowest possible price!