This will likely be the last small update before my full review of the next-gen MacBook Pro with Retina Display. Many of you have asked for information about the behavior of Windows running on the next-gen Pro. After getting both Windows 7 and Windows 8 running on the machine, here are some quick thoughts.

Windows 7 by default starts up at 800 x 600 on the Retina MBP, Windows 8 defaults to 1024 x 768. This behavior isn't specific to this system, the GeForce GT 650M doesn't have native driver support in either OS at this point and these are the defaults for the standard VGA driver in both cases. Windows 7 won't expose any resolutions higher than 1600 x 1200 without an actual NVIDIA driver, while Windows 8 will let you select the full 2880 x 1800 panel resolution: 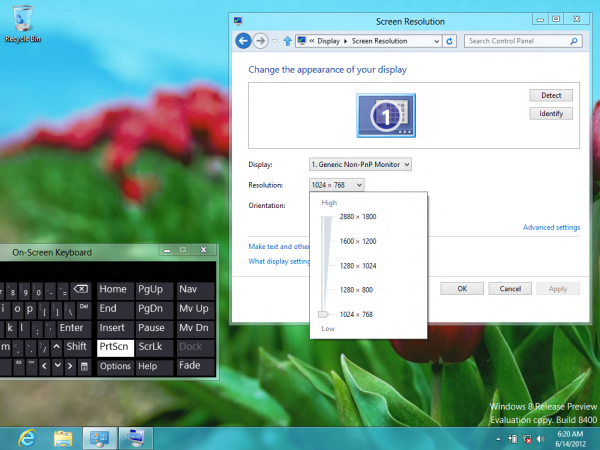 The problem is Apple doesn't provide a Boot Camp driver set for the Retina MacBook Pro yet. I had to use the Broadcom wireless driver from my SNB MacBook Pro to get WiFi working under Windows. Unfortunately, NVIDIA doesn't offer a downloadable GeForce GT 650M driver for either Windows 7 or Windows 8 just yet. The R302 Verde drivers are supposed to be due out in the not too distant future with support for the 650M, but until then you're mostly out of luck. I tried modified drivers to get 650M support and even tried modifying some myself, but I haven't been successful thus far. Just as before, switchable graphics isn't functional under Windows - the discrete GPU (650M) is the only one exposed.

Even without a working NVIDIA driver, I was able to get a feel for what a 2880 x 1800 setting would look like on a traditional desktop under Windows 8. If you remember back to our scaling and display analysis articles, Apple doesn't offer a desktop resolution equivalent higher than 1920 x 1200 under OS X. The thinking being that unscaled 2880 x 1800 would just be too small for the desktop, icon text and default UI elements. The screenshot below shows the Windows 8 desktop at default (no DPI scaling) settings at 2880 x 1800: 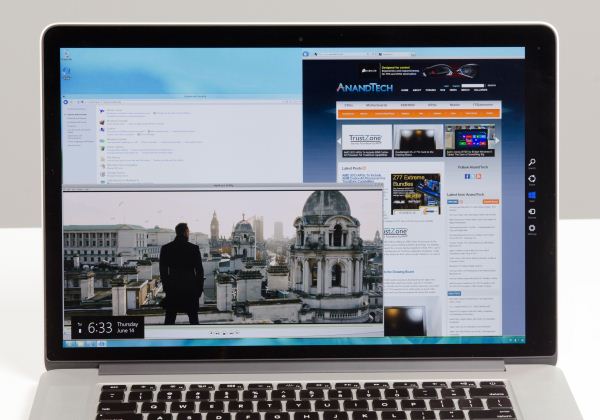 Note that the Skyfall trailer is actually a full 1920 x 1080 window. Text is indeed very small, but I suspect those with very good eyesight could actually be ok with this. I would love to see Apple actually expose a native resolution option under OS X. 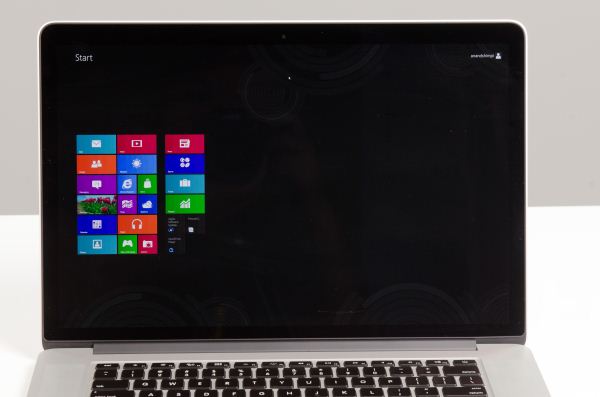 Text does get a bit more legible if you turn up DPI scaling. The gallery below has three shots of the same desktop comparing default (unscaled), 125% and 150% scaling options. There's also a shot in the gallery comparing the Retina MBP to Apple's previous highest DPI Mac display: the 11-inch 2011 MacBook Air to give you some perspective.

Quick conclusions? Windows users will have to wait a bit for official driver support, and NVIDIA needs to hurry up with a GT 650M Verde driver.