A Word on Build Quality

All things considered, PCBs aren’t very stiff. The additional layers in a PCB help reinforce it somewhat, but this is a byproduct of constructing the card rather than an intentional design element to improve rigidness. As a result, additional steps need to be taken to reinforce PCBs, particularly those large cards.

Depending on the size and the layout of the cooler, additional steps need to be taken to reinforce the card in order to prevent flexing of the PCB. Case in point, the GTS 450 and GTX 460 have small foam spacers on the PCB that keep the PCB from flexing towards the cooler, where there’s a roughly 4mm gap between it and the PCB. Other cards like the most common Radeon HD 5770 designs don’t have any reinforcement, supporting everything with the PCB. 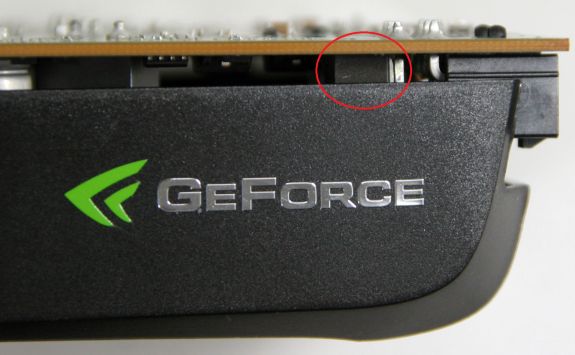 Up until this past week, I’ve never received a card that looked bent. Certainly if I dig through my entire collection and measure every free-standing card I could definitely find something that has a slight flex to it, but I’ve never had a card that you can tell is bent just from looking at it.

This changed when I received the first of our vendor samples, Sparkle’s Calibre X450G, a reference-PCB card with a massive Arctic Cooling Accelero Twin Turbo Pro cooler. The Twin Turbo Pro is a heatsink that runs the entire length of the card, and then on top of that is a pair of 92mm fans. All told the cooler takes up 3 slots, making it by far the biggest GTS 450 in our roundup and the best cooled.

As a result the PCB on our sample card is noticeably bent – it’s the first card I’ve ever had arrive as such. Whether this happened during manufacturing or on the long flight from Taiwan is anyone’s guess, but the outcome is that the PCB clearly bends towards the cooler.

Make no mistake: the card works just fine. It passes all of our tests, overclocks fairly well, and is ridiculously cool compared to the other cards in this roundup. At the moment at least it’s bent without any measurable downsides. But it’s not supposed to be bent, and this is the core of our worries.

The problem with bending of course is that it risks damaging solder joints – the wave soldered GPU and GDDR5 memory are the most intricate and most vulnerable components. While the card is fine at the moment, we have concerns about the reliability of the card in the long term. Will it hold up in 1-2 years with repeated heating and cooling cycles? This isn’t something we normally worry about, but when the PCB is permanently bent it becomes something of a concern.

Ultimately the card is a victim of bad build quality. The card should not have shipped without further reinforcement to the PCB to prevent just this situation, and this is something we’ve told Sparkle. In fact Sparkle even has a patented technology – VGA Rectifier Technology – that solves this problem by providing the card with a metal “spine” which should prevent the warping of the PCB. At this point Sparkle has not been able to tell us why the card did not ship with VRT, so we can only fathom to guess that their engineers did not believe the PCB would warp to the extent our samples has. Or perhaps for that matter we just got an especially bad card, but if that’s the case then how many more cards will ship like this? It’s a rare thing when we can say there’s something physically wrong with a card.

Moving on, this is not the end of our story. As exceptional as it is to receive 1 card with a warped PCB, it’s truly bizarre to receive a 2nd card, but that’s what happened to us last week. One of the last cards we received was the EVGA GTS 450 FTW, a pure reference card that should be identical to the NVIDIA reference card. But we found one small thing that made all the difference.

Remember the foam spacer on the GTX 460 and GTS 450 that we previously mentioned? It’s missing on our FTW sample. And as you may have already guessed, as a result the PCB is warped. 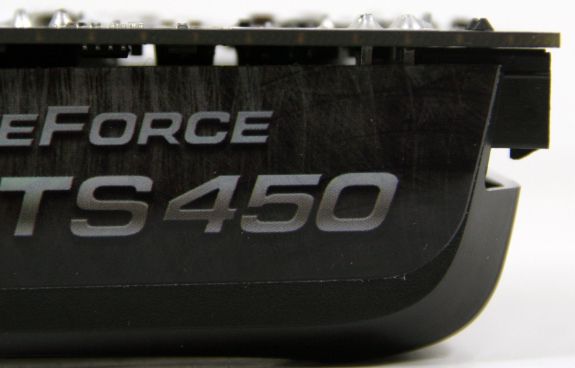 Unlike the Calibre card the warping here is not even a fraction as bad; at its worst we’re only measuring the PCB as being 1mm closer to the cooler than it is on our reference cards with their spacers. In all honesty if it wasn’t for the fact that we have reference cards with the spacers, we likely would not have even noticed it. But it’s there, and when we know what to look for it’s easy to spot compared to the edge of the shroud running parallel to the PCB. It looks like there’s a good reason for those foam spacers after all.

In any case a 1mm bend in the PCB does not appear to be a problem; as we said before we could probably find a free-standing card in our collection with a similar bend if we looked hard enough. So unlike the Sparkle card we’re not the least bit worried about the long-term effects of the warped PCB on this card. At its worst it’s a good example of why PCB reinforcement should not be overlooked.

Wrapping up our story with EVGA, a few hours before the GTS 450 launch we got a call from them asking for more information. This 1mm bend that even we weren’t concerned about got their attention, and as a result EVGA temporarily halted shipment of the GTS 450 FTW until their engineers could look in to the issue. It’s clear that the foam spacers are supposed to be there, and at this point EVGA is trying to figure out which cards (if any) may have left the factory spacer-less and why the PCB would have warped without them. Based on their own internal sampling, it sounds like the bending may ultimately be a product of overtightening the heatsink when it was mounted.

We’ll update this article with more information once EVGA can fully analyze the issue, but for the time being kudos to EVGA for stepping up to the plate and halting shipment for what’s probably nothing worse than a minor cosmetic issue. It’s a potentially costly move on their part that’s the embodiment of good customer service.

Finally, we also have a GTS 450 card in this roundup that goes through exemplary measures to prevent warping that we’d like to quickly discuss: the Asus ENGTS450 Top. The ENGTS450 Top uses a custom cooler mounted on what appears to be a reference-derived PCB. The cooler is different enough that Asus can’t simply pad it to protect against bending, so instead they go all the way.

At the top of the card is a metal spine (GPU Stiffer Bracket) running just short of the length of the card which prevents flexing. Further augmenting this is a heatsink covering the VRMs, which in turn the GPU heatsink sits directly on top of. With no gap between these heatsinks the PCB doesn’t have room to bend towards the cooler, and the metal spine ensures that it doesn’t bend anywhere else either. Next to encasing the card in a metal body it’s as solid as a card can get – even futuristic alcohol-swilling robots would have trouble bending this card. We rarely get the opportunity to credit a well-built card, but in this case it’s clear that Asus has one.